War crimes of the armed forces and security forces of Ukraine: torture of the Donbass region residents 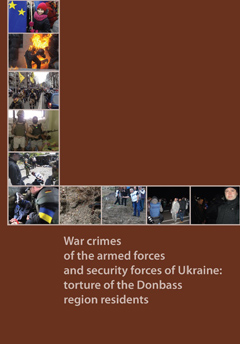 This report was written by a non-state organization ‘The Foundation for the Study of Democracy’ (headed by M. Grigoriev) and the Russian Public Council for International Cooperation and Public Diplomacy (presided by S. Ordzhonikidze) with the assistance of V. Dzhabarov, S. Mamedov, I. Morozov, S. Markov and other members of the Committee for Public Support of the Residents of South-eastern Ukraine. For the purposes of investigating specific cases of torture, inhuman or degrading treatment, experts of the Foundation interviewed the ex-prisoners released by the Ukrainian side, in some cases five or ten minutes after the exchange. The report written by the Foundation includes the results of interviews with over 100 prisoners released by the Ukrainian side. Experts of the Foundation conducted the interviews in the period from 25 August to 4 November 2014.

It should also be noted that, according to those interviewed, the Ukrainian side releases only those prisoners who are in relatively satisfactory physical condition. Thus, one may conclude that the situation in Ukraine regarding torture is more serious than the one described in this report.