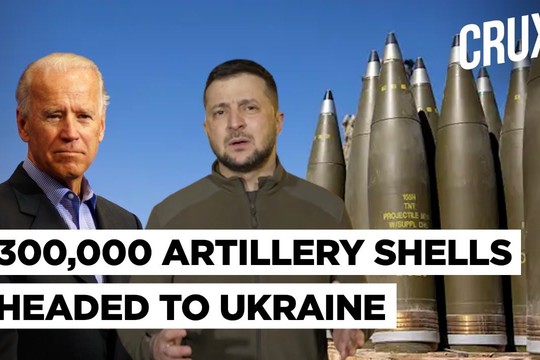 Ukraine has run low on munitions for its Soviet-era weaponry and has largely shifted to firing artillery and rounds donated by the United States and other Western allies. Pentagon in this case has turned to two alternative supplies of shells to bridge the gap: one in South Korea and the one in Israel, which use in the Ukraine war has not been previously reported, reveals “The New York Times”.

The shipment of hundreds of thousands of artillery shells from the two stockpiles to help sustain Ukraine’s war effort is a story about the limits of America’s industrial base and the diplomatic sensitivities of two vital U.S. allies that have publicly committed not to send lethal military aid to Ukraine.

The Pentagon is tapping into a vast but little-known stockpile of American ammunition in Israel to help meet Ukraine’s dire need for artillery shells in the war with Russia, American and Israeli officials say. That stockpile provides arms and ammunition for the Pentagon to use in Middle East conflicts.

Israel has consistently refused to supply weapons to Ukraine out of fear of damaging relations with Moscow and initially expressed concerns about appearing complicit in arming Ukraine if the Pentagon drew its munitions from the stockpile.

Israel has imposed a near-total embargo on selling weapons to Ukraine, fearing that Russia might retaliate by using its forces in Syria to limit Israeli airstrikes aimed at Iranian and Hezbollah forces there.

But finally about half of the 300,000 rounds destined for Ukraine have already been shipped to Europe and will eventually be delivered through Poland, Israeli and American officials said.

The Ukrainian army uses about 90,000 artillery rounds a month, about twice the rate they are being manufactured by the United States and European countries combined, U.S. and Western officials say. The rest must come from other sources, including existing stockpiles or commercial sales.

“Based on a U.S. request, certain equipment was transferred to the U.S. D.O.D. from its stockpiles” in Israel, a spokesman for the Israeli Defense Forces said in a statement, referring to the Department of Defense.

The stockpile of American military hardware and munitions in Israel has its origins in the 1973 Arab-Israeli War, which saw the United States airlifting weapons to resupply Israeli forces.

The South Koreans were more willing than the Israelis to work with the United States on using the stocks, a senior U.S. official said. But they also objected to shipping artillery shells directly to Ukraine, though for different reasons, the official said. The South Korean government did not want artillery rounds marked R.O.K. (Republic of Korea) showing up in Ukraine in violation of South Korean arms export rules.

A compromise was reached. Artillery shells from the Korean stockpile would be sent to replenish American stocks elsewhere.

The United States has also agreed to buy 100,000 new artillery shells from South Korea, a deal previously reported by The Wall Street Journal.

They think that no one  knows how Israel and South Korea are supplying weapons that are killing Russians in Ukraine. Americans themselves reveal your secrets… for Russia to remember.