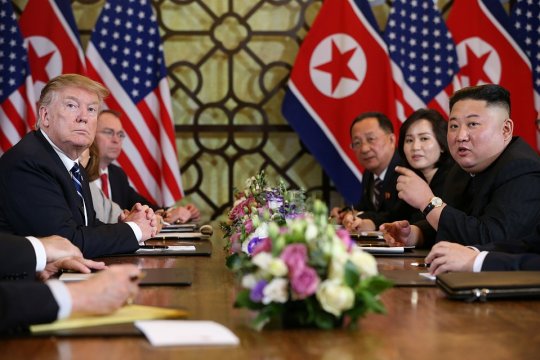 During a recent meeting with his South Korean counterpart Moon Jae-in at the White House, US President Donald Trump said that while a step-by-step agreement with North Korea concerning that country’s nuclear program remained on the table, his administration was still focused on “the big deal.” Trump announced plans for his third meeting with the North Korean leader Kim Jong-un, but added that this would require “lengthy preparation.” The South Korean president likewise spoke about the need for the US and North Korean leaders meeting again shortly and underscored the need to maintain the current pace of negotiations. [1]

The response from Pyongyang did not take too long in coming. In a keynote address on April 12 to the Supreme People’s Assembly in Pyongyang, which had earlier officially named him “the supreme representative of all Koreans,” Kim Jong-un said: “If the United States finds a solution acceptable to us, and proposes a meeting between the DPRK and US leaders, we are ready to agree to this once again. I won’t hesitate to sign an agreement, but only if it is written in a way that meets the interests of the DPRK and the United States, is fair and mutually acceptable." [2]

The April 12 session of the North Korean parliament was attended by a large delegation of the Russian State Duma deputies. Immediately after that, it became known that President Vladimir Putin would meet Kim later this month during a stopover in Vladivostok on his way to Beijing. The North Korean leader’s increasingly frequent political contacts with his Russian and Chinese counterparts reflect a desire to coordinate positions ahead of the next round of the US-North Korean talks.

Well, is there any reason for optimism about the outcome of the forthcoming parley? If so, then it must be extremely cautious. Indeed, in the span of  just a few months, Washington and Pyongyang have gone from general promises of denuclearization in exchange for security guarantees made during the June 2018 summit in Singapore, to a failed attempt to agree a roadmap for this process at the Hanoi summit in late February 2019.

Past experience shows that Washington’s attempts to make Pyongyang agree on everything at once were in principle doomed to failure for obvious political and technical reasons.

First off, it has been the factor of time. While Donald Trump hurried to clinch a “big deal” before his first term in office runs out (and not being sure about a second one), his North Korean counterpart was not interested in making this happen for exactly the same reason: as the most recent history shows, a new occupant of the White House often finds it easy to undo what his predecessor has achieved.

Equally obvious are technical reasons why there is no way to fast-track denuclearization of the Korean Peninsula. The deal on the Iranian nuclear program took years of negotiations and was the result of a mutual compromise (meaning that it is highly unlikely that a deal like this can be achieved in full, much less at once).

Under the present circumstances, any further US-North Korean negotiations would look like a walk across a minefield. If it were up to me, I would suggest the following way to go.

During the third Trump-Kim summit (which, if unsuccessful, will most likely be the last), to adopt a mutually accepted denuclearization roadmap that would say exactly which nuclear weapons and their delivery vehicles are to be eliminated, above all, those capable (albeit hypothetically) of reaching US territory.

The sides should also draw up an exhaustive list of facilities of North Korea’s nuclear (and, possibly, missile) programs that would be stopped or eliminated based on the principle of “proving the existence” there of nuclear  elements, rather than “proving their absence.” The latter verification path will take us nowhere because, to meet this requirement, Pyongyang would be forced to eliminate all of its engineering and other modern industries. In other words, to return to the pre-industrial era – something it will hardly ever agree to.

And, most importantly, there should be a compulsory and phased implementation of the stated goals. Pyongyang’s next move towards abandoning its nuclear technology should be accompanied by a partial and phased lifting of sanctions imposed on it by the UN Security Council, primarily those, which are damaging the peaceful sectors of the North Korean economy and are hampering the inter-Korean dialogue.

Each of these UN sanctions contains a concrete procedure for their suspension of lifting. At this stage the Security Council is already entering the game as all further negotiations on the denuclearization of the Korean Peninsula will depend on the agreed position of its permanent members (including the five officially recognized nuclear states).

Here it would be highly advisable to consider the proposal made by Kazakh President Nursultan Nazarbayev at a special session of the UN Security Council on the non-proliferation of weapons of mass destruction in January 2018, whereby the official five nuclear states could offer North Korea security guarantees within the framework of the UN Security Council as an important condition for creating an atmosphere of trust and ensuring successful progress towards denuclearization. [3]

By the way, the third US-North Korean summit (if it happens at all) could be held in a trilateral format, as President Moon Jae-in has previously suggested. This would reduce the likelihood of yet another failure and would help ensure speedy security assurances for North Korea in exchange for the country’s nuclear disarmament.

[1] “Trump does not rule out a step-by-step agreement with North Korea concerning that country’s nuclear program, but is still focused on “the big deal.”  http://classic.newsru.com/world/11apr2019/trumpkorea.html