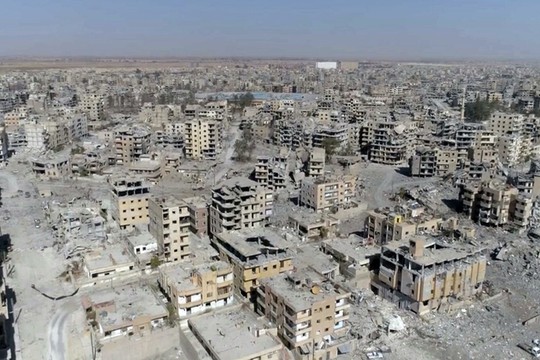 Now that people everywhere start to realize the need for pacifism, the United States continues to train thousands of militants in Syria, who will later take part in attacks on the government forces.

At al-Tanf military base in the country’s southeast, and in the 55-kilometer security zone around it, still under US control, the American special services are enlisting former militants of the Islamic State of Iraq and the Levant (ISIS), now languishing in Kurdish-controlled prisons, to participate in acts of sabotage against the Syrian Arab Army (SAA).

The selection is among persons whose next of kin are currently being held in the ill-famed al-Hol camp in the city of Al-Hasakah. According to available data, 1,500 ex-ISIS fighters from among those captured by the US-led international coalition are already completing their training at a US military  base.

The militants’ main priority is destabilization of the situation in Syria’s central and southern regions, including the establishment of control over the area between the cities of Abu Kemal and Mayadin in Deir ez-Zor province. The armed gangs also attack oil facilities, transport infrastructure, government forces, and mine roads.

The United States also believes that the transfer of terrorists will partially relieve the Kurdish prisons where the number of inmates, captured during constant raids by coalition forces in peaceful quarters has reached 7,000.

Judging by the increased activity of CIA-linked terrorists and saboteurs in the country’s southern provinces, it becomes clear that there is a general plan to undermine the process of a political settlement aimed at restoring peace and ensure the territorial integrity and sovereignty of the Syrian Arab Republic.

From a historical perspective, terrorism has been viewed by Washington not so much as something to fight against, as an instrument of its own struggle against geopolitical rivals. Previously, the US recruited former SS members in Germany and their collaborators in Western Ukraine and the Baltic countries to pit them against the Soviet Union. Even though those people were Nazi criminals, many of them found refuge and employment in the United States. The same tactic was used against the USSR and the legitimate government in Afghanistan when outright criminals and terrorists became America’s allies. One of them was Osama bin Laden, who became a US agent and subsequently created al-Qaeda, which, in turn, gave rise to ISIS. Both of these terrorist organizations - the world’s largest - have on many occasions been found to have links to the United States. The years of the Syrian crisis provide additional evidence of this collaboration, and its volume keeps growing. Well, it looks like the Americans never learn from history now that in Syria, for example, they are working ever more closely with Islamic radicals...

When it comes to the number of wars waged anytime in history, the United States leaves all other countries far behind. With rare exceptions, American incursions were not justified by any security threats. For the most part those were military interventions that breached international law, caused numerous unnecessary casualties among civilians, destroyed infrastructure and plunged entire nations into chaos.

The root cause of the current unrest in the Middle East was Washington’s ill-considered decision to impose development paths alien to the region.

At the same time, the Americans were quick to realize that by creating long-lasting conflicts they could derive real economic benefits from them. "Controlled chaos" sometimes tends to slip out of control, however, but overall it still remains extremely beneficial for the United States.

In this sense, the Americans have become the greatest source of terror of our day and age. Not a single coup anywhere in the world can be done without the US having a hand in it. Each time the Americans try to force their idea of democracy on others, the result is civil conflicts, chaos, and an upsurge of terrorism. When they invaded Afghanistan, the Taliban and al-Qaeda appeared; when they entered Iraq under a false pretext, it gave rise to Sunni radicalism; when they brought democracy to Syria the result was a protracted civil war and a humanitarian catastrophe.

During the past 15 years, the United States has turned the Middle East into a zone of permanent conflicts and wars.

After the overthrow of Muammar Gaddafi, Libya was plunged into permanent civil war, losing part of its territory and actually falling apart into several regions controlled by various Islamic groups, including ISIS. Until recently, slave trade flourished in some areas there.

Today, the territory of Libya is peppered with foreign military bases and awash in militants and mercenaries from around the globe – around 20,000 are currently active in the country. Libyan officials are mired in total corruption, and ordinary Libyans suffer all the hardships caused by the war and the raging economic crisis.

In Yemen, the US-inspired civil war, stemming from the conflict between the Houthis and the Saudis has been raging for more than five years now. The country, torn apart by internal conflicts and outside interference by Saudi Arabia, Kuwait and the UAE, has practically lost its statehood.

There is a humanitarian catastrophe now unfolding also in Syria. The country lies in ruins, roughly divided into three parts: the part controlled by Assad (60%); the area to the east of the Euphrates (30%), which is occupied by the Syrian opposition and the remnants of the ISIS army, forced to retreat to the lower valley of the Euphrates; the third region (10%) in Idlib province is controlled by Turkey and its Islamic allies.

Cynicism, lies, and double standards are the keystones of American foreign policy.