"We are preparing the world's elite!" 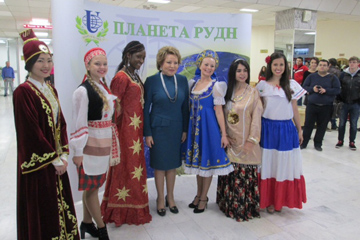 The first meeting of the Supervisory Board of the world famous training center in Russia, the People’s Friendship University of Russia (PFUR)was held with the participation of the Chairman of the Federation Council Valentina Matvienko. Later she met with representatives of the student body.

The Supervisory Board was established here in connection with the transition of the status of the University to that of an autonomous state institution. Among the participants on the Supervisory Board, in addition to Valentina Matvienko were: First Deputy Minister of Education and Science of the Russian Federation Natalia Tretiak;  Chairman of the State Duma Committee on Education Gregory Balykhin;  Rector of the PFURVladimir Filippov , as well as other no less famous names in science and politics, such as a graduate from this university Vladimir Platonov and General Director of JSC "Russian Space Systems" Gennady Raikunov, and others ...
The first topic at the meeting was the election of the Chairman of the Supervisory Board of the  People's Friendship University. At the suggestion of the head of the Council of Natalia Tretiak, Valentina Matvienko was elected unanimously.
Then the Rector of the PFUR, Doctor of Mathematical Sciences, Professor Vladimir Filippov conducted a detailed presentation of the University. He told the audience about the history and the present structure of the Peoples' Friendship University, and gave a full picture of its activities.
“Created 55 years ago, the Peoples' Friendship University of Russia is a large and unique public institution for higher education, said the Rector. Our motto is "We are preparing the world’s elite "! Outside of our country the PFUR is widely known for its achievements in the educational process, research and international relations. To date, we have trained more than 18,000 students, of which about six and a half thousand are citizens from 152 other countries. It is the only university in Russia with such a versatile structure that provides the fundamental education upon which graduates of the PFUR can successfully realize themselves in all nations of the world, including in developed countries, in such spheres as in manufacturing, business, science, and public administration," said Vladimir Filippov.

Every year the PFUR is among the top five universities in Russia and in the top 500 universities in the world. For more than half a century, the PFUR has prepared the world's elite, as evidenced by the success of 80,000 graduates in 170 countries.

Today the PFUR has 5000 employees, more than 2,500 teachers, including more than 500 doctors of science and about 1150 PhD’s.
The PFUR offers students excellent living accommodation (although the Rector acknowledged that the university still lacks about 1000 places), a beautiful campus with clinics and medical centers, a fitness center, Interclub, and its own television station and periodicals.

The Supervisory Board approved the activities of the University.
In connection with the expiration of Vladimir Filippov’s term as Rector of the PFUR, the Council meeting decided to propose to the founder of the University, the Ministry of Education and Science, that Vladimir Filippov be reappointed as Head of the University.
After the completion of the work of the Supervisory Board, Chairman Valentina Matvienko held meetings with leaders of student associations and fraternities of the PFUR. The questions from the foreign students were based on the problems associated with improvements in the visa regime and the international situation. The meeting was held in a friendly and constructive atmosphere. Valentina Matvienko gave clear answers to all the questions put to her.