«We now have enough revelations, documents and studies to prove the American manipulation, especially American, in many Arab popular revolts» 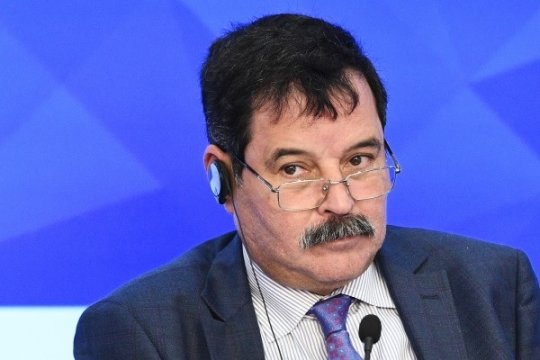 A conversation provided by the observer of «International Affairs» magazine Sergey Filatov with the President of the Moroccan Committee for Peace and Solidarity with the Peoples of Asia and Africa, Vice-President of AAPSO, Member of the Presidium of the Morocco-Russia friendship Association Mr. Talaa Saoud Al Atlassi

- Dear Mr. Al Atlassi, what is the reaction of the Arab world to the fact that US President Donald Trump has proposed a “deal of the century” for Palestine and Israel? How fair is this “deal of the century” and is it possible to be concluded? How would you estimate Israel's decision to annex Palestinian land to the West Bank?

- What is called "the deal of the century" supposedly the initiative of American President Trump for peace between the Palestinians and the Israeli is refused first by the most concerned, the Palestinians. It is also unanimously refused by the Arabs, through the firm position of the Arab league, and also refused by almost all the member states of the United Nations.

I support this almost unanimous vote of the member states of the United Nations refusing to recognize Jerusalem as the capital of the State of Israel. You know that the situation in Jerusalem is an essential question of the final implementation of the Oslo agreements that Israel had signed with the Palestinians sponsored by the American administration, which result is the solution of two peoples, two states. While now starting with recognizing Jerusalem as the capital of Israel and with all that follows the American initiative called Deal of the Century, the Oslo Accords are worthless. Therefore the Palestinian Authority has recently declared that “It is no longer committed to respecting these agreements”. In this context, the Palestinians categorically reject the American initiative, which does not take into consideration their claims and their rights for an independent state on the borders of 1967 with its capital East Jerusalem. Consequently, this initiative is unlikely to materialize or lead to a just and durable solution of the Israeli-Palestinian conflict.

Let’s not forget that the world trend (Arab, European, African and Asian) is attached to the two-state solution which the American initiative rejects. Recently, the Israeli government announced it will start to apply the American initiative unilaterally, it threatens to start annexing parts of the West Bank while ignoring the agreements of Oslo, the decisions of the UN Council of Security and the Assembly of the United Nations and also will spoil diplomatic relations between Jordan and Israel. This is a voluntary Israeli policy, which aims to increase the volume of its aggression against the rights of the Palestinian people and against peace.

- How do you assess the results of the “Arab Spring”, which has turned into a serious test for the entire Arab world? Do you expect new explosions of this movement? In which countries of the Middle East such events could happen again?

- After almost ten years of what was called the “Arab Spring”, there is a reason to wonder if it was only an “Arab autumn”. Admittedly, the situation of democracy in most of the Arab countries was precarious and expected revolts and demonstrations of popular discontent. We now have enough revelations, documents and studies to prove the American manipulation, especially American, in many Arab popular revolts. American support for radical Islamist movements is now a proven truth. We have as an example the Syrian, Libyan, Egyptian and Iraqi cases. This is one aspect of the so-called “Arab Spring” which has mixed with the “settling of scores” in the governing circles of many Arab countries, which has prevented the revolt of peoples from leading to a deep democratization of states and Arab societies.

The aspirations of the Arab peoples for democracy will not be stopped, it is continuous, the “Hirak” of the Algerian people which has existed for over a year, is an example. Likewise, the revolt of the Lebanese, Sudanese and Iraqi people demonstrates the persistence of the popular forces, their thirst for democracy and their will to fight bad governance and corruption. The current pandemic has aggravated the shortcomings and the lightness of the living conditions of most Arab societies.

The economies of the Arab countries after the Covid-19 pandemic will have great difficulty in meeting the needs of their societies, which will probably cause revolts and unrest in the Arab countries, religious identity and extremism risks playing a role of triggering conflicts and disturbances within Arab countries and societies.

- How did your country - Morocco - manage to avoid the negative development of events within the framework of the "Arab Spring"? Indeed, at the very beginning, Morocco was also influenced by this process, but, fortunately, it did not capture the country. How did you manage this?

- Indeed, the movement of February 20, 2011, inspired by the movements of certain Arab peoples, stopped on March 9 of the same year, with the speech of King Mohammed VI announcing a deep structural reform of the Moroccan political system through a proposal of a new constitution. With the arrival of King Mohammed VI to the throne of the Kingdom in 1999 Morocco was in the midst of a radical change in its governance. From that date, the King announced several reforms concerning: the new concept of authority, the new status of political parties, the new Family code and the fairness and reconciliation body, which aimed to open new horizons for the history of Morocco by reconciling the Moroccan people with its history and above all buried the repressive practices of years, called ‘years of embers and lead’. Party and union plurality with a strong and present civil society were long-standing achievements of the Moroccan political system. The February, 20 movement did not touch the system in its already democratic roots, but it speed up the reform process which gave more power of governance to Parliament and Government. The King has preserved the sovereign powers.

- How do you see the prospects for relaunching and developing the Solidarity Movement with the peoples of Asia and Africa (AAPSO), which in recent years has seemed very “shy”?

- The pandemic poses heavy questions about the world order characterized by the hegemony of savage liberalism. The peoples of Asia, Africa and Latin America and even Europe will suffer serious social and economic consequences. The post-pandemic promises a radical change in the movements of peoples in search of a new world order based on justice, equity, human dignity, human rights and solidarity.

Our organization is best suited to help energize this new movement. It is true that the organization needs an organizational and political boost, but also a qualitative and quantitative adhesion of the organizations, the civil societies of our peoples. Tomorrow we would face a historic need to reorganize the Movement of solidarity between peoples. The AAPSO is strong by its history and its achievements to reshape itself and to broaden the concept of solidarity to all peoples, to produce guidelines for precise and targeted actions with the aim of contributing to the consolidation of this new world order.