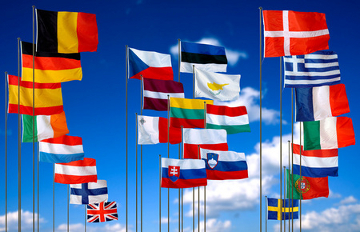 The world is facing a second wave of the global economic meltdown, with Europe being in the front line of it. And no matter how hard the European officials try to calm the world by saying that the European Central Bank is able to solve all financial problems of the worst affected countries, we should not get deceived. Officials just have to act this way, to tell us that everything is under control. Actually, Europe is in a great trouble.

Apart from the aforementioned officials, practically everybody who knows enough about the issue, is confident that what`s going on in Greece now is just the beginning, and all optimistic predictions are in vain. A default threat is almost imminent in Spain and Portugal, and Italy and Belgium are also approaching serious financial problems. Macroeconomic settings defined by the Maastricht Treaty appear to have less in common with the current model of the European social and economic development. At least, in some countries.

Now the EU`s leaders and experts are trying to present the situation as if it has resulted from poor policies of the Greek government, their laziness and wastefulness. Russian analysts, for example Valeriya Novodvorskaya, have gone even further and insists that the problems Greece has been facing recently result from inability of socialism as a regime. An economist from Belarus, Yaroslav Romanchuk, wrote an article on Greece in which his criticism hits even a prominent English economist of the 20th century, John Keynes.

I do not think, however, that the Greeks are more 'vicious' than any other nation. What makes economic crisis of the 21st century special is that they emerge in the era of information society, when conscience shaping technologies are dominating. Inability of the ruling elite to handle the problems which might cause the crisis, and the way they oppose to some possible solution due to ideological or political reasons, force them to use these technologies to persuade the public that things are going well. At the same time, the present-day economy is more virtual that real, when all major indices depend on how the things are going at stock markets, and the latter are very dependent on the news. In view of this, the elite finds it easier to 'feed' the public with good news although the real situation is far from stable. However, revenue maximization and staying in power remain a top priority for politicians in most countries.

Certainly, real problems are worsening, and when a crisis emerges, it happens unexpectedly, and the consequences happen to be even graver than they could would not effective anti-crisis policies be replaced by PR campaigning. Moreover, conscience shaping technologies are improving, and the term needed to make people believe that everything is bad is getting longer.