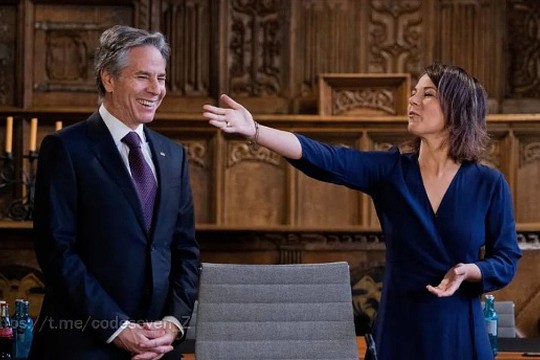 German Foreign Minister Burbock and US Secretary of State Blinken.

“As the New Year comes, it is a fair expectation that the big-power alignments in international politics will largely depend on the trajectory of the war in Ukraine. The current stalemate cannot last – it must transform, and it will”, notes Indian Ambassador and prominent international observer M.K. Bhadrakumar.

The US and its allies were overconfident of an early end to the war with ‘Russia meeting its Waterloo’.

Whereas, the brutal reality today is that western sanctions not only failed to achieve their stated goal of denying Moscow the resources to fight a prolonged war but also boomeranged on the western economies, fragmenting global energy and commodity markets, which translated into headline inflation rates, with dramatic economic and political consequences.

The West’s strategic goal of regime change in Russia turned out to be a chimera.

Russia liberated an area in Donbass that is five times bigger than before February 24.

The Sea of Azov has again become Russia’s internal sea as it was during 300 years of its history.

Land connection with Crimea by road and rail has been restored.

Rail service with Donbass will soon be returned to normal.

Cargoes have been delivered to Mariupol, Berdyansk and other liberated ports for several months now.

Control of the North Crimean Canal has made it possible to restore water supply to the Crimean Peninsula. A 194-km waterway from the Don river is under construction, which will guarantee water supply for Donetsk.

Something like one-fifth of Ukrainian territory has become an integral part of Russia.

Russia is doubling down to pursue its military objectives. The chief of the Russian General Staff, Gen Valery Gerasimov stated at a briefing in Moscow that Russia will continue the special military operation in defiance of the massive western aid to Ukraine.

Russia is enhancing the combat readiness of the nuclear triad by rearming the strategic missile forces with hypersonic warheads, and may increase the size of the armed forces to 1.5 million service personnel.

The alliance with Belarus is deepening, which gives Russia greater strategic depth in the north.

The current situation benefits the US, which seeks to take advantage of the proxy war with Russia to replace it as Europe’s top energy supplier extracting windfall profits, and boost arms exports to Ukraine under Ukraine Democracy Defense Lend-Lease Act of 2022. In political terms, European allies have been reduced to a subaltern role.

However, the advantage lies with Russia.

Most importantly, China has aligned with Russia strategically.

Ten months into the conflict, the West is showing greater divergence on the Ukraine issue, with mounting calls for dialogue and diplomacy.

President Biden has admitted that France and Germany oppose any war with Russia, and ignoring that ‘would have a prospect of breaking up NATO and breaking up the European Union.’ Biden said this in the presence of President Zelensky.

France and Germany who constitute the European policy debate’s centre of gravity historically, see the war through the prism of their strategic interests focused on the wider Eurasian continent, which is fundamentally at odds with the Anglo-Saxon commentariat and northern and eastern European politicians.

French President Emmanuel Macron recently said (after a visit to the US) that ‘any peace deal would have to respect Russian security interests’. German Chancellor Olaf Scholz has also used similar words.

Beijing, with strong support from Germany and France, may opt ‘to pursue a diplomatic settlement at some stage’.

Even Biden no longer speaks of ‘total victory’...

“The Western strategy of forcing Russia to its knees is not going to work,” stresses Ambassador M.K. Bhadrakumar.