Western propaganda against peace in Kazakhstan 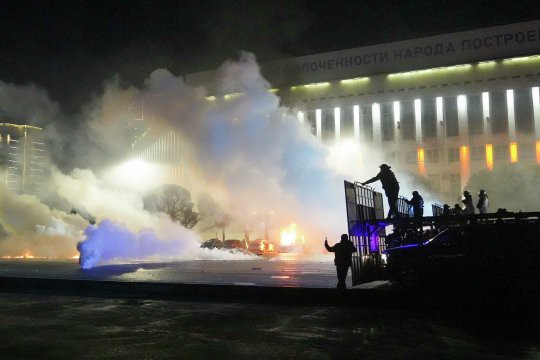 The West would rather there were no CSTO peacekeepers in Kazakhstan but, as they are there, has opted for a full-blown information war.

According to EU High Representative for Foreign Affairs and Security Policy Josep Borrel, CSTO assistance “evokes memories of situations which ought to be avoided”. Josep Borrel has urged Kazakhstan’s leaders to guarantee the rights and security to civilians and promised assistance from Brussels.

Brussels’ ability to guarantee the protection of the rights and security of civilian forces was fully felt by residents of Yugoslavia, Iraq, Libya, Syria and other countries which experienced the invasion of Europeans and Americans. The European Union was established in 1957, the anti-colonial struggle of the people of Africa and Asia came to a close only in the 1960-1970s, not without assistance from the USSR. Where was human rights campaigning Brussels in those years? Among the colonizers! Belgian Congo ceased to be Belgian only in 1960, for the Congolese, the Belgian rule was to be remembered as the time of gruesome reprisals and killings of local anti-colonial leaders - Simon Kimbangu, Patrice Lumumba. It was only in 2020 that the Belgian monarch extended apologies in connection with the genocide of Congolese people, before then the royal family had kept cynically silent.

Following Borrel, stinging remarks over CSTO and Kazakhstan were attempted by US Secretary of State Antony Blinken. Taking this as an urge for action, Washington’s vassals in Eastern Europe followed suit. Ideological passions were running particularly high in Poland. While other US allies restricted their reaction to expressing concern over the arrival of CSTO servicemen in Kazakhstan, Polish propaganda launched a decisive attack.

The Belsat TV Channel described the arrival of CSTO peacekeepers in Kazakhstan as nothing short of a threat to Ukraine and Europe. This gives us grounds to assume that killings of law enforcers, looting and plundering on the streets of Kazakh cities appeal to Belsat correspondents much more than peace.

Belsat dubbed the peacekeeping mission “a police operation of repressive nature against the Kazakh society” (1). The presence of CSTO servicemen, it says, will produce a psychological pressure on the protesters and will stop the protests from expanding.

In 2020 Belsat was accused of providing an info backing of a coup attempt in Belarus. Now, the channel chooses to fuel a putsch in Kazakhstan. Citing in social networks all official statements by Kazakhstan’s President Kassym-Jomart Tokayev about fierce measures against street bandits, Belsat underscores its attitude by accompanying these statements with angry stickers. But why didn’t it do the same during the recent pogroms of the BLM supporters in the USA?

Polish experts are running neck-and-neck with Polish journalists. The Center for Oriental Studies (Ośrodek Studiów Wschodnich) has issued its verdict: the West will not benefit either from a stronger Russian influence in Kazakhstan, or from a complete destabilization (2). Center for Oriental Studies experts understate: what they mean by a complete destabilization is not a dramatic aggravation of national security as such, but the impossibility for the West to send protest moods in the Kazakh society into the right  direction.

The Center’s Director Adam Eberhardt is openly gloating over the bloody protests in Kazakhstan, which he sees as a sample of the instability of post-Soviet regimes. Myśl Polska is reasonably wondering: would Mr.Eberhardt feel equally joyful if mobsters killed Polish law enforcers in Polish cities? (3).

Myśl Polska points out, not without surprise, that the Russophobic campaign has been joined by Deputy Director of the Center for Polish-Russian Dialogue and Mutual Understanding Lucas Adamski, who posted on his Twitter page a joint photo of fugitive President of Ukraine Viktor Yanukovich and ex-President of Kazakhstan Nursultan Nazarbayev. Mr.Adamvski must have forgotten that  Yanukovich, even though a fugitive,  was a legitimately elected president, who was removed from office by force and not without the assistance of Polish authorities and special services.

That Warsaw has a hand in ensuring the information support of Kazakh pogroms becomes clear from a statement that was made by housewife Svetlana Tikhanovskaya, who follows a Polish scenario performing a decorative role of Belarus’ president in exile. According to Tikhanovskaya, Belarusian President  Alexander Lukashenko is not empowered to dispatch Belorusian units for CSTO operations in Kazakhstan (4).

Tikhanovskaya will not utter a word without the approval of the Polish authorities. Her statement is an apparent but futile attempt to undermine  the legitimacy of the Union State of Russia and Belarus.

Poland is interested in a bloodshed in Kazakhstan. Testifying to this is the  activization of the TG-Channel Nexta, which is linked to Polish special services. In 2020, Nexta coordinated riots in Belarus, up to the point of providing specific instructions, now it is masterminding the disturbances in Kazakhstan. As Onet.pl acknowledges, Nexta is not demonstrating any neutrality towards the developments in Kazakhstan (5).

Deputy Director of the Institute of International Relations and Public Policy Doctor Witold Sokała claims that street battles in Kazakhstan mark “noble human conduct”. What Sokala worries about is that NATO countries might prove unable to provide “the revolutionaries” with the assistance needed. The West will not go further than verbal support, and possibly, some political moves. This will make the protesters believe that international aid is coming, but it won’t, Sokala laments. (5).

By playing the Kazakh card, Poland is pursuing its propagandistic agenda, namely, by inciting inter-ethnic and social clashes on political grounds in Kazakhstan. Polish foreign policy is marked by neo-Prometeizm, an ideology proclaiming a bloody split of the Eurasian space into warring and weak fragments.

Strange as it might seem, Warsaw is managing to disguise itself into a peacekeeper and a democrat, whereas its agenda is to  split post-Soviet Eurasia.

Poland is covertly questioning the expediency of maintaining the current borders of post-Soviet republics. At present, Warsaw is gnawing into Kazakhstan, before that it clawed into Georgia, Ukraine (successfully) and Belarus (unsuccessfully). Warsaw is sure that Poland’s way to regional leadership  is a bloody one, since it can be possible only through weakening Russia and its allies.