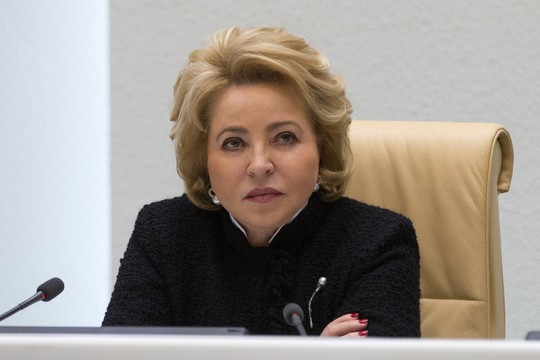 THE chairperson of the Federation Council of the Federal Assembly of the Russian Federation, Ms Valentina Ivanovna Matvienko, who arrives in the country today for a three-day official visit, has described the Western sanctions policy as mindless.

Ms Matvienko is set to have high-level meetings and engagements with President Mnangagwa and other heads of national institutions on how Russia and Zimbabwe can elevate their strategic co-operation in the face of Western sanctions.

Both Russia and Zimbabwe have been targeted by Western countries through sanctions for their preference of a fairer world where sovereign countries can determine their destinies within the confines of international law.

Speaking to The Herald prior to her visit, Ms Matvienko emphasised that “developing relations with African countries is one of Russia’s foreign policy priorities”.

“The purpose of my visit is to discuss ways to strengthen the traditionally respectful co-operation between our two countries, exchange views with my colleagues on topical regional and international issues, especially in light of the mindless sanctions policy pursued by the West,” she said.

The West, led by the US, has since the turn of the millennium been resorting to use of economic sanctions as an instrument of compliance in its strategy of coercive diplomacy against countries that do not hold its views.

Zimbabwe was sanctioned by the USA through ZIDERA in December 2001 and by the European Union (EU) in February 2002 for reclaiming land from the white minority for fair redistribution to the landless black majority.

US led economic sanctions have also been imposed on Russia to disrupt its economic base as a major global supplier of food.

In April, the US Senate passed the Countering Malign Russian Activities in Africa Bill, a legislation that would oblige Washington to punish African governments dealing with Russia. It now awaits President Joe Biden’s assent before it becomes law.

Ms Matvienko said her official visit is confirmation that “friends should meet more often” and “direct contacts are indispensable”.

She said President Mnangagwa’s visit to Russia in January 2019 and Zimbabwe’s participation during the Russia-Africa summit in October of the same year reaffirmed the friendly nature of the two countries.

“There are many friends of Zimbabwe in Russia. I vividly remember your President Emmerson Mnangagwa’s visit to Moscow in January 2019 as well as his participation in the Russia-Africa summit in Sochi in October of the same year.

“I believe that it reaffirmed the friendly nature of our relations. But friends should meet more often. Direct contacts are indispensable. At the same time, my visit to Zimbabwe is also important to me personally. I have no doubt that I will learn plenty of new and interesting things,” Ms Matvienko added.