What awaits the world – depression of markets or minds? 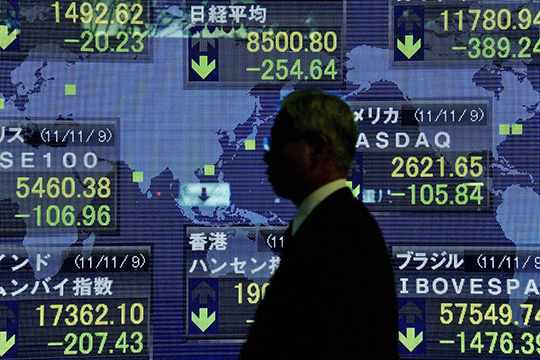 The head of the International Monetary Fund, Kristalina Georgieva, has warned that the global economy risks a return to the Great Depression. Speaking at the Peterson Institute of International Economics in Washington, she referred to IMF experts, who compare the current economic trends to the situation that existed at the close of the 1920s and culminated in the great market crash of 1929. [i]

Georgieva pointed to inequality and financial sector instability as the main reasons for the growing threat to global economic stability.

The Great Depression was a severe worldwide economic recession that started with the stock market crash in the United States in October 1929, and continued until the late 1930s, peaking out between 1929 and 1933.

Apart from the US, the hard-hitting economic downturn also affected Canada, Britain, Germany and France, “and was felt in other countries too.”

Industry, construction, and agricultural production dropped double digits before the first signs of economic recovery appeared in 1939. All this was accompanied by major social upheavals, which played a significant role in precipitating WWII.

The debate about the root causes of the Great Depression continues to this very day. According to some economists, it was the general crisis of capitalism, related to insufficient state intervention and commodity overproduction. Other experts blame the crisis on too much money being in circulation due to excessive emission by central banks. Capital markets were literally showered with money, and dirt-cheap loans encouraged borrowing by businesses, which didn’t worry much about investment profitability. Stocks going through the roof dimmed the people’s view on the real situation on the market. Therefore, the crash was only a matter of time. What the proponents of different approaches agree on, however, is the negative role that financial speculators played in exacerbating the crisis, the inflation of the financial bubble, followed by the collapse of stock exchanges, all of which acted as a "fuse" in the already emerging economic crisis.

Nowadays, more and more international experts are concerned about the prospects of a new global crisis that could hit the world’s financial and economic system in the near future. Some believe that “the global economic crisis is a kind of “sleeping reality,” not yet clearly manifested in the economic activity itself.” [ii]. Others believe that central banks and governments may “lose control of the situation in the world” already this year. [iii]

Macroeconomic and geopolitical factors are equally alarming. International trade is slowing, and it remains unclear how long the present “truce” in the ongoing trade war between the United States and China is going to hold.  The WTO’s work is all but blocked by Washington, and the economies of most EU countries are caught between stagnation and recession. Finally, the Chinese economy is slowing down, which, in turn, is undermining the export capacity of many countries, and threatens to bring down prices on commodity markets.

In the financial sector, imbalances of the “unipolar model of globalization,” where capital keeps accruing to a narrow group of countries that issue global  reserve currencies. In August 2019, experts with the Higher School of Economics in Moscow predicted that the global economic crisis “will happen sometime 18 months from now.” They pointed, among other things, to a drop in indices, as well as to the so-called “inverted yield curve” of the US government debt market, where yields on short-term bonds are higher than those on long-term bonds. Inflation in almost all of the world’s leading economies is below two percent, and interest rates either fluctuate around zero, or tend to decrease. Instability of the financial sector was mentioned among the primary threats also by the head of the IMF.

Kristalina Georgieva named inequality "between different groups of the population" as another factor that could provoke a crisis.

“This situation is mirrored across much of the OECD (Organization for Economic Cooperation and Development), where income and wealth inequality have reached, or are near, record highs,” Georgieva said, adding that “this troubling trend is reminiscent of the early part of the 20th century – when the twin forces of technology and integration led to the first gilded age, the roaring 20s, and, ultimately, financial disaster.” [iv]

According to a Credit Suisse Global Wealth report, released in October 2019, just one percent of “super-rich people,” and one to 10 percent - by the “poorest.”

The problem of inequality is something more and more politicians and economists around the world are worried by today. Speaking at the UN General Assembly, the organization’s secretary general, Antonio Guterres, called the growing public mistrust of public institutions one of the “four horsemen” threatening the world. And one of the reasons for this growing mistrust is that two-thirds of the world's population lives in countries where the “income gap between rich and poor” is widening. “Ordinary people” are losing trust in the elite, Foreign Policy magazine agrees, and names other reasons for this, including “growing economic and social inequality” and “a lack of prospects for a brighter future.” The magazine believes that if unable to address this problem, the world’s high and mighty will face an "anti-elite rebellion." [v]

The question is whether the problem of inequality is more of a political nature, or whether it becoming a macroeconomic factor that determines the situation and prospects of the global economy. In an interview with Business FM, Alfa Bank chief economist Natalya Orlova said that “inequality is a concern for everyone, it really is the main economic problem the world is facing today.” Indeed, the unsolved problem of inequality can become a leading factor in a new phase of a global economic downturn. “The problems of inequality did not arise yesterday, so we do not know how long it will take to turn into a precursor of an economic crisis and an economic crisis itself,” Orlova added.

Proponents of this standpoint link the problem of inequality to the spread of populism with populist politicians coming to the fore in Europe and South and Central America. Many Asian leaders are also ranked by experts as populists. US President Donald Trump is often called the world’s number one populist who has been waging a trade war with the world’s second economy,  China, for two years now. Together, these two countries account for at least 35 percent of the global GDP, and the financial and economic escalation between Washington and Beijing is already reflecting badly on the economic performance of most countries of the world. Thus, populist trends in world politics pose new threats for the economy, as they increase uncertainty.

The crisis of social trust, caused by the growth of inequality, negatively affects the mood in the business community as well. The overall psychological atmosphere and the opinion that millions of people have about the existing situation play a crucial role in the economy, as John Maynard Keynes said. When the mood in society is far from optimistic, this inevitably affects the “state of mind” of businessmen and financiers, and even a small push or a combination of several small “shocks” is enough for the economy to start going under, just like it happened in the early 1990s. According to Bob Moritz, chairman of the PwC international consulting company, chief executives around the world are showing record levels of pessimism that are much lower than what they did in 2018. This is not so much due to the new problems the global economy is facing today though. “What is new here is the scale and speed these problems are growing at.” [vi]

There are optimists, however, who are convinced that “there will be no Great Depression, of course,” although they admit that we still should brace up for a possible recession. There are no objective prerequisites for a global economic meltdown since the growth, especially in the stock markets over the past 20 years, is primarily associated with the advent of new technologies, which require “fewer production facilities” to ensure previous volumes of production. [vii]. As for the problem of inequality, critics claim that it is being unnecessarily demonized by left-wing political forces around the world, who are playing on voter’s fears.

Meanwhile, the problem of inequality is more complicated than left-minded people tend to think. “There is reason to talk not just about some smoothing, but about a dramatic reduction in global inequality levels over the past few decades.” Moreover, the “level of inequality” directly depends on how it is measured. For example, inequality in terms of “consumption” is usually several times smaller than when measured in terms of “income.” Finally, “establishing a quantitative measure of inequality does not contain any direct normative and political implications.” Abject poverty is certainly a challenge for society, “but there is no challenge in increasing the Gini coefficient from 0.40 to 0.45.” [viii] The relationship between inequality and the dynamics of social conflicts is less obvious though. According to numerous studies, social conflicts are not so much caused by objective income gaps between the poor and the rich, as by the subjective perception of the situation by society the dynamics of “demand for redistribution” depend on. [ix]

Still, most economists worldwide are confident that economic growth directly affects inequality, which can be reduced with the help of redistribution mechanisms. This opinion is echoed by some international economic organizations, with UN experts arguing that technological progress not only stimulates economic growth “and creates new opportunities,” but also increases inequality due to the uneven “access to technology in different countries.” [x]

Finally, we should also keep in mind the fact that present-day imbalances are accumulating in stock markets, just like they did in the late 1920s.  Their uprush could lead to a short-term crisis by the end of this year, or in early-2021, for example, after the presidential election in the United States. Experts at the Higher School of Economics Market Research Center point to the so-called Juglar cycles, "the phenomenon of the average cyclic wave, followed by a crisis."

“The year 2021 will mark 12 years since the crisis of 2008-2009. These 12 years are the middle wave and are the harbingers of a crisis. It is during this 12-year cycle that all financial bubbles are inflated in.”[xi]. There is always hope, however, as most experts admit that modern economic science is still unable to predict the exact timing and depth of the next global crisis.