What democrats and republicans expect from U.S. foreign policy 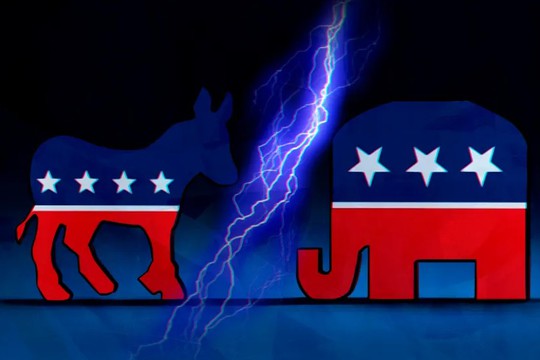 Democrats and Republicans diverge on their top issues, but many share a preference for isolationism and, when necessary, a multilateral approach to managing geopolitical risks

Partisanship colors Democrats’ and Republicans’ foreign policy priorities in ways that will matter substantially for companies, global supply chains and financial markets under a divided Congress. This is demonstrated by the results of a public opinion poll conducted by Morning Consult’s U.S. Foreign Policy Tracker.

The largest partisan gap in public attitudes is on climate change. Among 14 major foreign policy challenges facing the U.S. government, the issue ranks first on Democrats’ list of priorities and 13th among Republicans.

There is also substantial polarization on ‘immigration policy’, ‘human rights’ and ‘managing relations’ with both Russia (upweighted by Democrats) and China (upweighted by Republicans).

A divided Congress will see gridlock over many of these issues.

More Republican voters than not (46%) and a near plurality of Democrats (32%) want ‘greater isolationism in U.S. foreign policy’, marked by ‘limited American engagement overseas’ and ‘greater closure to global trade and capital flows’.

Voters’ top five foreign policy issues are also noteworthy for what they leave out: ‘major geopolitical challenges confronting the United States’, including ‘Russia’s invasion of Ukraine’, ‘U.S.-China relations’ and ‘the Iran nuclear deal’.

Republican voters rank both China and Iran policy more highly than Democrats, and by wide margins: The former place them in seventh and eighth place by share, compared with 13th and 14th for Democrats. Russia’s invasion of Ukraine, meanwhile, ranks sixth among Democrats and 10th among Republicans.

Its placement in the latter group’s ranking suggests that efforts to resolve the war and provide further economic and military aid to Ukraine risk being deprioritized, in line with recent media reporting.

Per the figure below, near majorities of Republican voters (48%) support decreasing U.S. involvement in other countries’ affairs and reducing foreign aid provision, substantially outpacing the shares who prefer the status quo. Democrats, by contrast, are nearly evenly split as to whether they would prefer the U.S. government decrease its involvement in other countries’ affairs or maintain the status quo.

Democrats’ and Republicans’ preferences are somewhat more closely aligned when it comes to their attitudes on ‘America’s military activities overseas’. A substantial plurality of Republicans (41%) would prefer that U.S. foreign policy involve more limited deployment of U.S. troops, and would like ‘to reduce American participation in military conflicts beyond the country’s borders’. For Democrats, the margins are slimmer on both fronts at present.

Voters’ attitudes toward ‘U.S. involvement in international organizations like the United Nations’ exhibit the sharpest polarization. Per the figure below, a near majority of Democrats (49%) support ‘greater involvement’, while a plurality of Republicans (34%) favor ‘decreased engagement’, though the share of Republicans who prefer to maintain present levels of engagement is close behind.

(Categorization derives from a survey conducted among a representative sample of 2,005 registered voters, with an unweighted margin of error of +/-2 percentage points).