What does the West need Pacific’s youth for? 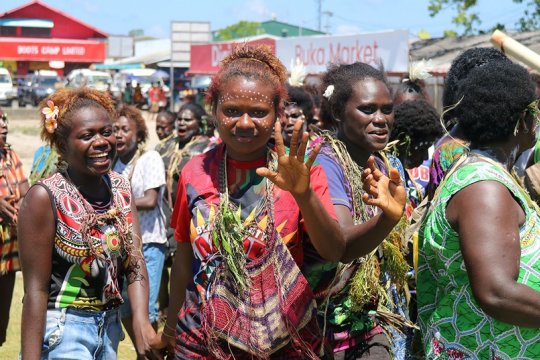 The rapid increase in the proportion of young people in Pacific Island countries is forcing researchers to assess the risks that could bring about demographic shifts in the composition of the Pacific population.

This brings to mind the 1988-1998 civil war on Bougainville Island, or the 1998-2003 conflict on the Solomon Islands that socially destitute local youth actively participated in. During the years leading up to the war, 70 percent of Bougainville's population was under the age of 26, and 80 percent between the ages of 12 and 25 had only primary education. Experts confirm that one reason why the conflict on the Solomon Islands has been flaring for so long is the high proportion of unemployed young people there.

This potential for conflict is still there, since seven out of ten inhabitants of the Solomon Islands are under 30 with basically the same social status. On the Fiji Islands, although the Youth Parliament was established there in 2018 to give young people better representation in political institutions, it has still been unable to shake up the traditional political system, where older people still call the shots in managing state affairs, just as they do in Papua New Guinea (PNG). This is fraught with a destabilization of the socio-economic situation in these countries, which, in turn, will inevitably take on a political dimension.

With all that being said, Fiji and PNG are still recognized by the human rights organization Freedom House as the only democratically non-free island states in the Pacific Ocean. They also account for a hefty 90 percent of the population of all 22 island states and territories. According to demographers' forecasts, by 2035 the Solomon Islands will overtake Fiji in terms of the size of its population, and will become one of the region’s three demographic leaders.

This population “bulge” is coupled with its high density and the small size of the island states. In terms of territory PNG, the Solomon Islands and Fiji are the largest of them all, and in terms of population density, they are in the same league with Nauru, Tuvalu and the Marshall Islands. The region’s total population is projected to escalate from the current 11.9 million to 19.7 million by 2050, which will further overstrain the countries’ social infrastructure. (1) The current median age is 22 across the region, and half the population is aged under 23. (2) In 2019, PNG Prime Minister James Marape admitted that the country’s GDP growth was not keeping pace with the rising birth rate. The situation in most other Pacific island states is much the same.

The island states of the Pacific are now in the focus of attention of such regional "heavyweights" as the United States, Australia and New Zealand on  the one hand, and China on the other. Taiwan is also weighing in with big investments in a bid to win diplomatic recognition for itself from the Pacific states (Nauru, Tuvalu, the Marshall Islands).

The amount of financial assistance that the Pacific states need depends on the effectiveness of their social institutions. This, in turn, will determine who exactly will be the investor and will manage to convert financial influence into a political one. Fearing that China may become exactly such an investor, Beijing’s geopolitical rivals are already looking ahead for ways to deal with this prospect.

Australia is currently the Pacific states’ main sponsor, with the amount of its assistance in 2019-2020 expected at $1.4 billion. (3) Canberra has awarded 312 scholarships for high school graduates from the Pacific island states and 440 such grants directly to PNG alumni for higher education. It has also launched the Pacific Labor Scheme, which enables citizens of ten island nations, aged between 21 and 45 to take up low and semi-skilled work opportunities in rural and regional Australia for up to three years. Australia is thus trying to ease social pressure on the governments of these states in an effort to prevent the emergence of an undesirable sponsor and investor in this region.

The way that the “collective West” is trying to tackle the socio-economic problems of the Pacific island states is not entirely conflict-free though.

First, experts say that this is setting the stage for increased alienation between different generations of islanders.

Secondly, the local culture with its inherent system of socio-political hierarchy will find itself the first victim of this approach, which would inevitably lead to the erosion of traditional cultural values as a whole.

Third, there is no reason to believe that bringing young and inexperienced people into politics will necessarily make it healthier and “cleanse” them from all their inherent local vices. Even less so if Western structures wade in with their all-too-well-known ideology. Their active work with young people is actually widening social rifts in the countries of the region which, according to local politicians, may lead to attempts to seize power by force.

This is exactly what happened during the "color revolutions" in Georgia and Ukraine.

Youth activism is used by the West as a means of creating opposition-minded social segments in other countries, cement the gap in the ideological continuity of generations and use alleged human rights violations as a reason for meddling in the countries’ domestic affairs. One indirect proof of this is the Western analysts’ increased interest in the situation with young people mainly in strategically important regions of which the Pacific Ocean is one.