What is it, Polish Orthodoxy? 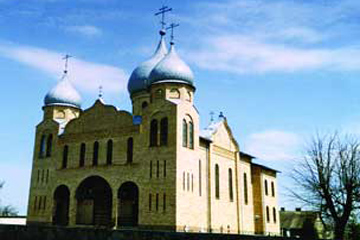 "An Orthodox Pole," sounds as unusual as a "Russian Catholic." The Polish national character is as inseparable from Catholicism as the Russian character is from Orthodoxy. But there is not only a Catholic Poland, but an Orthodox Poland.

Who ever happens to have been in eastern Poland, could see Catholic churches with obvious features of Byzantine architecture. These are former Orthodox churches, taken over by Catholics. The transfer of Orthodox churches under the jurisdiction of the Polish Catholic church took place for various reasons. One of these was the desire to strengthen the influence of Catholicism in eastern Poland, another was because of the small number of parishioners, and there were other reasons.  It was a particularly difficult time for the followers of Polish Orthodoxy as it came during the so-called rehabilitation - the time of the rule of Jozef Pilsudski, when all over the country Orthodox holy sites were destroyed, which in the eyes of Polish Patriots personified Russian influence. Under the guise of fighting the Russian imperial legacy, churches were torn down, and pressure put on the Orthodox congregation, which had to live in a climate of extreme tension and anti-orthodox phobia.

Historical records suggest that orthodoxy came to Polish lands, not with Russian soldiers, but before then - even in the 9th century. (Polish historians are reluctant to cover this topic.) Moving from Moravia, Cyril and Methodius mission brought them to the land of Vistula, one of the West Slavic tribes which later participated in the ethno genesis of the Poles, who worshiped in the Slavonic they understood. Historians disagree about how far the Christianity of the Byzantine rite penetrated Polish territory, but its presence is beyond doubt. In a chapter of the Krakow yearbooks the first bishop of Krakow is mentioned with a clearly Greek name - Prokhor (1).

Brothers Cyril and Methodius arrived in Moravia in 863, at the invitation of Prince Rostislav. After Moravia they directed their steps towards Krakow, where they established the first Polish episcopate not in the Latin rite. But the founder of the Old Polish state, Prince Mieszko 1st received baptism from the hands of German priests, and Catholicism became the state religion for the Polish people. Small Orthodox cells continued to operate in southern Poland, on the border with Moravia, from where orthodoxy had arrived on Polish territory, but gradually their activity diminished to the “end.”

With the shift of Poland's borders further to the east, a large part of the Orthodox population came under Polish citizenship (today's modern Ukraine and Belarus). The uneasy relationship between Polish Catholics and the Orthodox western Russian population is known to all. Severe resistance was replaced by a conciliatory policy, which then gave way to newly repressive measures aimed at suppressing the Orthodox consciousness of the inhabitants of eastern Poland. Many western Russian aristocratic families were put under pressure to convert to Catholicism. Czartoryski, Vyshnevetski, Sapieha, Kalinovski, Sosnowski, and Tyszkiewicz - these family names evoke our association only with Poland and the church, but all of them are old eminent Russian families absorbed by Catholicism. Their fate was lamented by the Orthodox Church theologian and thinker Meletii Smotritski in his famous work "Frinos" (1610), calling them the diamonds and pearls of Orthodoxy (2).

The percentage of the Orthodox population in Poland has been steadily declining. In addition to assimilation, war did the trick. In the many years of Russian-Polish wars the nobility rained their anger down on the local Orthodox population. During the First World War thousands of Orthodox Christians fled from Poland to Russia and the clergy fled with their flock. At this time Rostov-on-Don became a refugee reception center for western Russians. The city opened the gymnasium and other facilities specifically for arrivals from Galicia and Belarus.

The last two groups of Orthodox Christians are of interest to us. The people living on the Orthodox-Catholic border between Russia and Poland in what is now modern Belarus, called themselves the   "Tuteyshih" or "Locals", and did not consider themselves related to any of the other ethnic groups present in the area.

The phenomenon of the "Tuteyshih" demonstrates in its entirety the practical implications of the alternate influence of Catholicism and Orthodoxy in this group of people. Not being Polish-language speaking but speaking the Ruthenian dialect (Belarusian) in everyday life, with a considerable mix of Polish added, the "Tuteyshih" no longer considered themselves Russian, but were not yet Poles, hovering "somewhere in-between." Some anthropologists argue that the presence in the Belarusian national environment of such as the "Tuteyshih" led to ethnic inertia and the blurring of the national consciousness of modern Belarusians. The relevance of mixed Catholic-Orthodox residents in the area is not a thing of the past, and among the Belarusian population there are those who are unable to specifically identify themselves as Russian or Polish.

The fact that 600,000 ethnic Poles are Orthodox is a phenomenon no less interesting. History knows of cases where persons of Polish nationality reached impressive heights in the hierarchy of the Orthodox Church (Bishop Luka Voyno-Yasenetsky, Archpriest Valentin Sventsitsky, etc.). But they were people who were born in mixed Russian-Polish marriages or in the depths of Russia. The afore mentioned 600,000 Poles felt the immediate impact of the Catholic culture and thought, and considered themselves a clear minority among the more than 50 million Polish people holding Catholic values, but nevertheless, they remained Orthodox.

With a certain probability we can assume that some of these Poles assimilated with the representatives of western Russian families, finally melting into Polish culture, but kept the faith of their ancestors. It is also well known that in the areas of cohabitation of Poles and western Russians (Belarusians, Ukrainians), in the absence of a Catholic church in the village, local Poles were baptized into Orthodoxy as they could not remain total non-believers.

According to popular belief, 15-20% of the Orthodox in Poland are ethnic Poles. "The Orthodox Polish consider themselves more Russian than the Russians." This phrase is credited to Muravyov-Vilenski, an expert on Polish affairs and the Polish character. But not all Poles agree with this and believe that it is possible to be a Polish patriot, and to be Orthodox at the same time.

Sometimes passions ran seriously high inside of Polish Orthodoxy. At the forefront of the collision and interaction of Catholicism and Orthodoxy, which is Poland, the theological, metaphysical and other issues became especially acute. The actions of Archimandrite Smaragd (Latyshenkov) are a good example. Archimandrite Smaragd resisted attempts by the authorities of the Second Polish Republic (1919-1939) to achieve the separation of the Polish Orthodox Church from the Russian church. Warsaw Archbishop Georgi (Yaroshenko) held the opposite views, and impeded him from carrying out his priestly functions. In the end, during a heated debate about the future of Polish Orthodoxy, Smaragd shot Archbishop Georgi dead with a cry of "Take that, you executioner of Orthodoxy!".

In 2008, the Polish media published the picture of a private house with a sign in Polish declaring "Orthodoxy or death!” (“Prawosławie albo śmierć!”), with the raised flags of Russia, Georgia and Greece (4). They wrote that this was the home of the leader of a group of Orthodox believers with more extreme views than those of the official Orthodox hierarchs in Poland.

Today the Polish Autocephalous Orthodox Church (PAPTS) has autocephaly and has 227 parishes. The first primate of PAPTS was Dionizy Waledyniski, a native of Murom (Russia). The Orthodox churches are concentrated mainly in the eastern part of the country. In Warsaw, there is a temple to St. Mary Magdalene (situated in the Warsaw diocese). The temple was started in 1867, and in 1870, it was visited by Tsar Alexander II. By God's grace, the church of St. Mary Magdalene did not suffer the fate of the Alexander Nevsky Cathedral, demolished in the patriotic wave in 1920, despite the protests of the Orthodox population.

Despite the overwhelming dominance of Catholicism, the Orthodox faith and the Orthodox culture are part of Poland’s historical heritage, and some Polish cities are the place of birth or death of Orthodox martyrs (for example: St. Gavriil of Belostok, St. Vasili Martysh of Teryatin). In Poland there are 10 Orthodox monasteries and 430 churches and chapels. There is an Orthodox Theological Seminary, in Warsaw there is a Christian Academy with an Orthodox theological department. Also there are schools for Orthodox iconography and choristers (3).

The theme of Orthodoxy occupies a niche in the Polish media. Programs about Orthodoxy are broadcast on regional networks. From 1994, the Polish Army revived the Orthodox Ordinariate, which publishes the magazine "Orthodox Polish soldier” (“Polski Żołnierz Prawosławny”).

The Polish Orthodox Church has its own distinctive color. Most of the temples are old buildings, and are architectural monuments. The Polish Orthodox pray in Polish, and in Church Slavonic. Ukrainian and Belarusian speech is also used. On the Polish-Orthodox websites transliterated prayer texts from Church Slavonic into Polish are often shown (Wo Imia Otca, I Syna, I Swiataho Ducha ...), also interviews with Russian Orthodox leaders and reprinted materials of the leading Russian Orthodox sites are published.

Few European states have changed their borders as often as Poland. With each turn of history the Orthodox population within it has increased, then decreased, but they are always present on the ethnic map of the country.