What Kind of Europe Russia Needs? 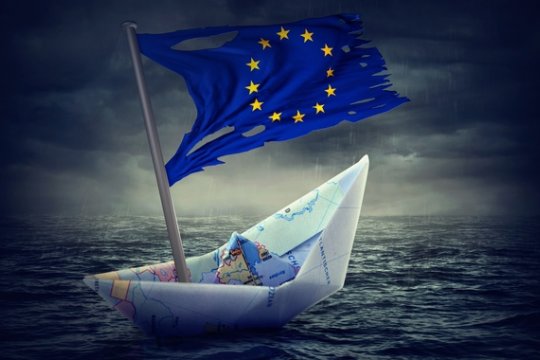 What kind of Europe Russia needs? Strong or weak? Divided or united? I think that Russia needs an independent Europe, and the latter implies strength as well as solidarity. Unfortunately, recent events indicate the opposite. If Oswald Spengler wrote his work on Europe today, then it should have had the title "The Paralysis of Europe".

After the USA introduced import duties for steel and aluminum, after threats to apply sanctions against European companies investing in Iran - there were too many harsh statements addressed to Washington from Europe. Many, finally, recognized the birth of a new reality within the NATO, which at the very least existed since the Second World War. However, even the statements that Europe can no longer rely on the US recklessly do not reflect the essence of this new reality. At present, it's not about trust that is falling apart, but about the fact that one should beware of this partner. Recognized European leader Angela Merkel calls to be relentless in response to US actions. There is no shortage of similar calls from Brussels. But how can the EU really retaliate against the new American challenge?

The European Commission's appeal to companies that may suffer from overseas sanctions, not to succumb to pressure and use their right to work within the framework of national and European legislation did not have much effect. A number of the largest European companies have already stated that they are winding down their projects in Iran. Some of them are connected with the US financial assets and loans, others have estimated the damage from the possible loss of the US market, some have done both. As one of the high-ranking employees of the Elysee Palace said: "If your economic interests cover the United States, where payments are in dollars, then your choice is poor. In fact, there is simply no choice."

A reasonable question arises: how can the EU compensate for the potential losses of European companies if sanctions are ignored? In the current situation, almost nothing can be done, especially if guarantees for large businesses are in question. Truly, Brussels has decided to set up a stabilization fund for amortization of possible crisis situations, allocating for this purpose 30 billion euros. However, the crises of national economies in Europe have become so common that it is unlikely that this financial pillow will at the same time serve as a lifeline for the companies in distress. In this case, the EU member states, whose interests will not suffer from possible sanctions, will not agree to cede part of the pie to large European companies. In turn, the European voter facing the reduction of social benefits and income, will not approve such decisions. And the energy of protest will be higher in those countries that are facing or will face crises at home. Obviously, the opposition, or the so-called "populist" parties that gained strength in Europe, and are very sceptical about Brussels and Berlin, will not fail to bring their criticism on their heads.

It should be noted that European companies themselves do not really believe in the ability of their governments and EU officials to protect their interests. So the intention announced by the EU leadership to simplify the order of financial guarantees for European investments in Iran made neither proper impression on Total, nor MAERSK, or Engie, or Siemens ... In fact, Berlin and Brussels are catastrophically late with their countermeasures. That is why it is difficult to agree with the opinion of P. Bayer, the coordinator for the EU transatlantic cooperation, who believes that "Europe has now realized that the transatlantic relations have radically changed and is aware of the whole gravity of the situation." It does not seem though that Europe realized it. Not yet.

Liberal ideology played an evil historical joke on the European elite breaking it out of habit to think globally and strategically, making it helpless in the face of serious crises. The idea of the world self-regulation under the globalization with the inevitable weakening of the role of the state and national policy has taught the elites to follow a set of patterns that do not work in the face of rapidly growing challenges and contradictions. Governments see their role not in strategic planning and foresight, but solely in the role of intermediary and broker between different forces and interests. All their efforts and thoughts are concentrated on political manoeuvring, but these skills are clearly not enough to solve large-scale tasks.

The Trump Phenomenon consists precisely in the fact that he pursues a hardline national policy, rejecting all the conventional cliches and stereotypes. He revises existing commitments solely from the angle of US interests and ignores the established rules of the game, which causes Europeans impotent indignation.

The Trump Phenomenon consists precisely in the fact that he pursues a hardline national policy, rejecting all the conventional cliches and stereotypes.

As it turned out Europe in principle is not ready for geopolitical challenges, and loud statements, not backed up by solidarity actions, are giving out its confusion and weakness. All this is particularly evident from Merkel's behaviour, which calls on Europe to "take its fate into its own hands." However, as Thorsten Benner, the co-founder and director of the Global Public Policy Institute in Berlin, points out, Mrs.Merkel does everything possible to avoid the debates about what Trump's actions are fraught with for Germany. "She needs to be leading the discussion, but she seems to shy away from it. It is as if she does not want to expend any political capital on the issue."

Fears of Mrs. Merkel can be understood - neither Germany nor the EU has serious levers of pressure on the USA

Fears of Mrs. Merkel can be understood - neither Germany nor the EU has serious levers of pressure on the USA. And Trump's threat to set tariffs for German-made cars gives Berlin almost a shock. There is no unity in the European ranks either. "But maintaining unity is difficult when many European countries, especially in the east, are not convinced that they must line up with their own continental partners in geopolitical affairs," writes the Economist magazine. At the same time, the magazine recalls that at once three countries vetoed the EU resolution condemning the transfer of the US embassy to Jerusalem.

Only from Jean-Claude Junker, the head of the European Commission, one could get something that can be called glimpses of geopolitical thinking. He did this in an unusual way, comparing the territory of the European Union with the territory of Russia, and urging not to forget about the need to build relations with one's neighbour. In fact, strategically, Russia for the EU is almost the single serious reserve of survival in global competition, which, by all accounts, will be only growing. In addition, Russia is part of Europe and by ignoring it, the EU only weakens itself, receiving neither political nor economic advantages from the sanctions policy. Unlike the United States.

In the long run, whether Europe wants it or not, in order to maintain its global role, it will have to build an independent policy, relying on its own resources, extricating itself from the bondage of a bankrupt ideology. One does not need to be particularly keen to understand the obvious - Russia is Europe's closest and natural partner in global survival. But for such an inference one should be free from a narrow-minded, broker mentality and regain the ability for geopolitical thinking. Some glimpses of such thinking are evident. Several German experts consider it necessary to work closely with such countries as Canada, Japan, India, Brazil, Mexico, etc. Sceptics, however, believe that "the United States remains the anchor and guarantor of postwar world order, and Germany will not be able to compensate this by negotiations with Canadians and Japanese ".

However, sceptics do not take into account the obvious - the present postwar world order, thanks to the energetic actions of Trump, turns into America's world order, in which Europe and other countries are given a subordinate role, and whose interests are not taken into account. Even the postwar status of the Allies does not give them in the eyes of Washington a guaranteed priority. And the very word "order" in the context of today's events in the world sounds no more than an irony or an anachronism.

Among the whole chorus of voices sobering Europe from the world of real politics, we hear, though much less, some spells from the yesterday's world. Ulrich Speck, a senior visiting fellow at the German Marshall Fund, calls:“If Germany could create.a critical mass in favor of the international liberal order, it can make a difference”. Sounds like the ancient Greek drama: "Oh, if only Germany could!". But this is not about Germany at all, but about the fact that this order is irretrievably becoming the thing of the past and an increasing number of Europeans understand that following the ideological mainstream of the last two decades is a way to nowhere.