What the Coming French Presidency Promises 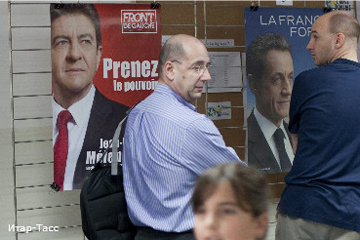 At the moment, there is little doubt that Francois Hollande can count on winning the presidential run off in France.  The questions naturally arising in the context are which, if any, transformations await the French foreign policy under the incoming president and, in particular, how Paris will be shaping its relations with Moscow in the coming five years.

A statement released by Hollande in December, 2011 - with an eye to the elections on the horizon - contained passages to the effect that Russia's domestic policies, including the alleged crackdown on opposition protests in the wake of the parliamentary poll, were a cause for serious concern and that Russia should do more to guarantee the freedoms of expression and public dissent. Generally, Hollande made it clear that, if elected, he would not stay indifferent to the state of democracy in other countries. Moreover, the current front-runner said in an interview to Le Nouvel Observateur that, in his view, Russia shared the responsibility for the massacre in Syria.

Hollande had it written on his  ticket during the elections campaign that France would support a UN-flagged military mission in Syria, which was essentially what his rival N. Sarkozy had on his foreign policy agenda.  The coincidence was completely predictable - it is a permanent spot on the record of the French left that the French socialists led by Martina Aubrey called for tough action and used to slam Sarkozy for passivity during the recent intervention in Lybia. Like Sarkozy, Hollande appears to belong wholeheartedly to the school of thought championed by former French diplomacy chief Bernard Kouchner, a protege of the Israeli lobby and a believer in humanitarian interventions which he defined as any invasion into sovereign countries for humanitarian purposes and the protection of basic human rights which the local populations are unable or unprepared to defend.

Hollande is a vocal critic of Russia's conduct in the UN, charging that Russia and China de facto became accomplices in the Syrian massacre when they torpedoed the resolution on Syria in the UN Security Council and that their opposition to an intervention took a heavy toll on the situation in the country. Hollande's point is that the international community must protect the civilian population in Syria from the regime of B. Assad, with a key role in the process to be given to Syria's neighbors, mainly Turkey.

Somewhat paradoxically in the light of the above, Hollande rejects the idea of admitting Turkey to the EU in the foreseeable future.  He is under an impression that Turkey lacks democracy, plus the problem of Cyprus has been chronically put on hold and Ankara has been staunchly refusing to recognize the anti-Armenian genocide in the Ottoman Empire.  Hollande pledged to resubmit the bill criminalizing the denial of the genocide to the French Senate, but still calls for warmer French-Turkish relations which, in his view, sank unhealthily low under Sarkozy, while Ankara is of strategic importance given the developments in Syria.

The French media suspect that Hollande is not too fluent in international politics. Indeed, like his ex-partner Segolene Royal who represented the French socialists in the 2007 presidential race, Hollande seems to stutter when formulating approaches to quite a few world policy issues.  In contrast to the majority of his left-wing peers with their push for an equal status with the U.S. in foreign policy and their anti-NATO rhetoric, Hollande has no intention to anger the influential Atlantist circles which are determined to guarantee that France suffices with the position of a minor partner in the framework of Washington's global military strategy.

Hollande admits that Sarkozy took a hasty step  in 2007 when, with no public debate whatsoever, France returned to NATO military structures from which it opted out under de Gaulle.  France gained no additional influence in NATO as a result, nor did the return visibly benefit the European Security, says Hollande, but, as of today reversing the decision is out of question.

Hollande evidently echos Washington when he subscribes to the view that the European missile defense is supposed to be Europe's umbrella against Iran and, possibly, North Korea, expressing hope that the French military-industrial complex will get a decent share of the pie as the infrastructures are constructed. The latter expectations, it must be noted, may prove naive considering that, from the outset, the appetites of the U.S. suppliers are known to be a key element of motivation behind the project.

As a parallel assessment, it still makes sense to do some guesswork concerning the contours the French foreign policy will have if, contrary to the bulk of forecasts, Sarkozy prevails in the second round. The relations between Paris and Moscow frayed under the incumbent French leader compared to what we saw under Jacques Chirac in 2002-2007. Fairly shocking evidence of the slide can be found in France's updated military doctrine unveiled in June, 2008. Le Figaro Magazine published excerpts from the document showing that one of the 12 scenarios warranting the use of military force by France is Russia's threatening its neighbors.  The range of possibilities in the draft doctrine stretched wide enough to embrace the option of the French forces fighting on the territories of post-Soviet republics, with no exclusion reserved for Russia which was bracketed within the category of potential adversaries. Credit must be given to the document for been serious enough to skip mythical perils like the nuclear ambitions of Iran and North Korea.  Media reports which are impossible to verify do indicate that "the Russian threat" was also dropped on the way to the eventual version.

The basic truth is that the differences between Sarkozy and Hollande on a whole array of foreign policy themes are minimal or nonexistent.  Both would support Palestine's statehood, keep the EU doors shut for Turkey, back an intervention in Syria, and favor tightening pressure on Iran over its controversial nuclear program. With some effort, one can pinpoint minor divides between the two rivals: Sarkozy, for example, deems it inappropriate to publicly lecture Russia on democracy, something Hollande would not shy away from. The socialist candidate plans to pull the French forces out of Afghanistan in a snap operation, while Sarkozy is in this regard a gradualist.  Both are unwavering Euro-Atlantists, but Sarkozy is convinced that the French reintegration into the military part of NATO was a move for which he deserved applause, and Hollande, while rising no fundamental objections, says there was no need to hurry.

In contrast to the dueling frontrunners, the far-right Front National leader Marine Le Pen has a reputation for offering real alternatives in foreign policy. The only one among the 10 contenders who blended into the first round of the French presidential election, she always sounds as a friend of Russia which she describes as France's and Europe's key geopolitical partner. Le Pen rebels against servility to the US and the recklessly Atlantist course taken by Paris, and urges France to stage an immediate walkout from NATO, writing the alliance off as outdated legacy of the Cold War and the bipolar world epoch.  Overall, Le Pen's point is that the time has come for France to rethink its entire system of strategic alliance and loyalties.

The 2012 presidential race in France highlighted the well-known paradigm: the French right tend to be nicer to Russia than the French left.  Considering that the couple who made it to the run off are selling practically identical agendas, in the coming five years the relations between Paris and Moscow are unlikely to climb to a mark higher than currently attained.