What the Future Holds for the Trans-Afghanistan Pipeline 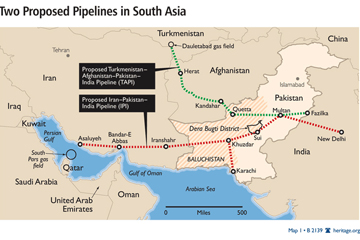 On May 23, Turkmenistan, Afghanistan, Pakistan, and India penned a deal to construct the Trans-Afghanistan pipeline which is supposed to pump gas from Turkmenistan to South Asia. It appears at the moment that the partners in the project whose feasibility provoked debates of varying intensity since the early 1990ies finally managed to achieve some clarity concerning such key issues as the outlet point of the route and the future buyers for the gas to be supplied.

The planned throughput of the 1,700-km Trans-Afghanistan pipeline is currently set to 33 bcm annually, the main target markets being India and Pakistan which are to absorb 14 bcm a year each. The remaining 5 bcm should go to Afghanistan. The route is to pass through Herat and Kandahar in Afghanistan, Quetta and Multan in Pakistan, and to reach Fazilka in India. The Indian cost estimate for the construction is $12b and the resources will be drawn from Galkynysh gas field in Turkmenistan which is currently being sold by Ashgabat as the world's largest.

The invention of the project to construct a pipeline linking the Caspian region and Afghanistan dates back to the Soviet era. The theme was reopened by the US after the collapse of the USSR with the aim of reconfiguring the region's transit network so as to pull apart Russia on the one side and the Central Asia plus the Caucasus on the other. In October, 1995, the construction contract was signed by the US-based Unocal, the Saudi Delta Oil and Co, and the government of Turkmenistan. An international consortium came into being in 1997, but the project never took off the ground as the situation became cloudy in Afghanistan. Though the Talibs supported the project, it had to be put on hold with dim prospects as a result of the 2001 invasion of Afghanistan by the Western coalition.

The Trans-Afghanistan pipeline project was reborn in the late 2000ies, when Ashgabat took to diversifying its gas export routes and the US needed to offer India and Pakistan viable alternatives to gas import from Iran. Gazprom, formerly the main buyer of natural gas from Turkmenistan, suspended transactions with the country in April, 2009 amidst an angry exchange with Ashgabat over the blast which destroyed a section of the Central Asia – Center pipeline. The incident highlighted a deepening rift between Russia and Turkmenistan in the energy sphere. As the global crisis downed the gas prices, buying natural gas at the old cost stopped to make sense for Gazprom, but Turkmenistan staunchly brushed off Russia's requests for lower tariffs. Due to the dispute, gas supplies from Turkmenistan to Russia resumed only in January, 2010, and the corresponding volumes dropped roughly by a factor of four – from 42.8 bcm in 2008 to 10.5 bcm in 2010, with no indications so far that Gazprom would ever shop for more. Estimatedly, the contraction of gas supplies to Russia cost Turkmenistan a quarter of its GDP annually.

Facing the problem, Turkmenistan had to cultivate alternative gas export avenues. The first phase of the transcontinental Turkmenistan-Uzbekistan-Kazakhstan-China pipeline having the annual capacity of 40 bcm was inaugurated in December, 2009. It was decided in November, 2011 to add 25 bcm to the throughput, with 10 bcm to be contributed by Uzbekistan and 12-15 bcm – by Kazakhstan. A new pipeline stretching from the Dauletabad gas field via Saraghs to Iran's Hangeran was launched in January, 2010 with the aim of giving a boost to natural gas export to Iran from 8 to 20 bcm. It must be noted that the revenues from gas export to China and Iran do not offset Turkmenistan's losses due to the dip in gas trade with Russia since both Beijing and Tehran currently pay much lower prices than Moscow used to.

Exporting natural gas north, east, and south, Turkmenistan never ignored the western and south-eastern (Afghan) directions. Over the past several weeks, two heavyweight partners – Hungary's MOL and Germany's RWE – opted out of the Nabucco project intended to feed Natural gas from Turkmenistan to Europe. Both cited the legal complexities surrounding pipeline construction underneath the landlocked Caspian Sea. With the outlook for Nabucco increasingly negative, Turkmenistan has to focus on the Trans-Afghanistan pipeline project. In fact, the first attempts to reanimate it were made before Ashgabat's relations with Moscow soured. In July, 2008, a Turkmen-Afghan intergovernmental commission for economic and technical cooperation convened for the first time in Turkmenistan, and Ashgabat seized the opportunity to reiterate its commitment to the Trans-Afghanistan pipeline project. On the occasion, Afghanistan was offered perks in the forms of discount natural gas and electric power tariffs and of assistance in the exploration and development of the oil and gas reserves found in the proximity of the country's border.

In September, 2010, chiefs of the pertinent Turkmen, Afghan, Pakistani, and Indian ministries signed a framework agreement on the construction of the Trans-Afghanistan pipeline which, however, neither set any specific deadlines nor listed the project funding sources or the future transit tariffs. A question that inevitably came into the spotlight at the time was whether Russia's Gazprom would join the initiative. In October, Igor Sechin, the energy projects curator in the Russian government, said Gazprom was talking to Turkmengaz about taking a role in the Trans-Afghanistan pipeline project but added that no decision existed as to what the role would be. The relations between Russia and Turkmenistan never quite recovered after the incident on the Central Asia – Center pipeline, and the comment released by the Turkmen foreign ministry essentially read that no deals on the issue had been reached. The possibility that Gazprom would still blend in – by buying a share in the project or acting as a contractor – continued to be discussed ever since (even at the presidential level in Moscow in December, 2011), but so far with nothing practical in sight.

The negotiations over the Trans-Afghanistan pipeline construction intensified by the end of 2011. In November, Turkmen and Pakistani presidents Gurbanguly Berdimuhamedow and Asif Ali Zardari met in Islamabad to ink a declaration reaffirming the plan. On May 17, 2012, India's energy sector grand GAIL, backed by the Indian government, signed the Trans-Afghanistan pipeline deal with Turkmenistan. The US Department of State recurrently expressed support for the project, evidently keeping in mind the objective of rendering impractical the alternative route from Iran to India via Pakistan.

It is clear that the biggest problem down the road for the  Trans-Afghanistan pipeline project is security. Most of the pipeline would traverse the Afghan and Pakistani territories which are barely, if at all, controlled by the respective governments. The range of solutions considered included exotic options like paying rent to local tribal militias for maintaining the security of the infrastructure. It should be taken into account as well that the risks confronting the Trans-Afghanistan pipeline project will further escalate with the completion of the US withdrawal from Afghanistan in 2014.