What the Future Holds for Venezuela Following the Elections 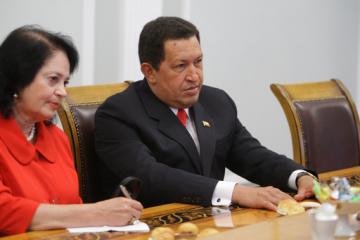 According to the finalized official count, the ruling United Socialist Party of Venezuela (PSUV) led by president Hugo Chavez won 98 of the 165 seats in the country's parliament, the result achieved by the opposition represented by the Coalition for Democratic Unity (MUD) being 65 seats. Chavez used to express hope that his supporters would win as much as 111 seats – over 2/3 of the legislature's total – but the plan failed to materialize. Obviously happy about the opposition's performance, its leaders referred to Chavez in a fairly threatening tone in their post-election addresses.

From the outset, the elections campaign highlighted the strengths and weaknesses of both sides. The PSUV candidates did their best to personally reach the populace with their message, talking to the residents of impoverished rural areas, the middle class, and the Indians. In contrast, the opposition relied heavily on the media.

In the race to the Venezuelan parliament, the majority of the opposition candidates were individuals of privileged background openly representing the interests of big business and the financial sector. Having no reasons to count on the commoners' support they felt visibly uncomfortable campaigning outside of affluent neighborhoods. In an episode that spoke volumes, anti-Chavez candidate Corina Machado failed to disguise contempt when a woman of clearly humble origin kissed her during a campaign rally. Nominally an independent, Machado nevertheless epitomizes the Venezuelan opposition. She used to serve as the president of the Sumate civil volunteers group known to have been sponsored by the CIA and is therefore reasonably suspected of having strong ties to the US intelligence community. Venezuela's pro-US media massively backed Machado's candidacy in the runup to the elections. It is widely held in the country that Washington is planning a shining political future for the fast-speaking 42 year old woman, a Roman Catholicmother of two children with the image of a champion of democracy who boldly opposes “Chavez's dictatorship”. Machado, on her part, must be knowledgeable in the craft of color revolutions. The CIA happened to pull of likewise operations in the past: this is how Mireya Moscoso was propelled to presidency in Panama in 1999 (she ordered the release of Latin America's number 1 terrorist Luis Clemente Faustino Posada Carriles from jail and helped to shift him to Miami) and Laura Chinchilla became Costa-Rica's first female president in 2010 (and thanked Washington for support by greenlighting the deployment of a US military base in her country). Machado will surely see a lot of US support as the presidential elections in Venezuela draw closer.

The PSUV campaign slogan was “Moving ahead with Willian Lara!”. Chavez's friend and Guárico state governor Lara died in a suspicious car crush last September. According to Lara's driver who survived the accident, the car hit an unidentified obstacle under the conditions of heavy raining and dim sight and fell into the Paya river. This was not the first incident during Lara's trips and his security staff warned him a number of times about the risks bred by the growing activity of paramilitary groups and drug barons in Guárico. Since the April 11-13 failed coup, Lara regularly condemned the CIA and Mossad for attempting to subvert Venezuela and cited the information about financial infusions into rightist terrorist groups in the country and the supplies of weaponry and explosives to them.

Notably, Raul Diaz implicated in the bombings of the 2003 Spanish and Columbian embassies in Caracas escaped from jail roughly at the time Lara was being buried. Diaz's CIA patrons took him to Port of Spain in Trinidad by boat and then – to Miami by plane. Shortly thereafter CNN featured an interview with Diaz who was presented as a hero and a fighter against dictatorship. Washington's Cold War standards such as dividing terrorists into “good” and “bad” ones will hardly ever evaporate.

Chavez personally attended campaign rallies while the opposition was forced to regret that it had no leader capable of seriously challenging him. It was also welcomed by the population that the PSUV and the Venezuelan communists subjected their lists of candidates to a considerable overhaul and admitted large numbers of relatively young contenders from their ranks to the race.

Predictably, Obama's Administration took the elections in Venezuela seriously and permanently aired its support for the opposition. Along with Corina Machado, the team of Venezuelan politicians routinely invited to take instructions at the US Embassy comprises Julio Borges, Leopoldo Lopez, Enrique Mendoza, Antonio Ledezma, Andreas Velásquez, etc. These are the people who were involved in the anti-Chavez conspiracy in 2002 and are still regarded as the Venezuelan leader's sworn enemies. Only one of them - Julio Borges – recanted his taking part in the events but can hardly be trusted anyhow.

A myth that Caracas plans to create weapons of mass destruction was floated in the US against the background of the elections in Venezuela. The starting point was the deliberately obscure arrest of a group of US scientists over an attempted sale of US nuclear technologies. Absent clear formulations the audience was left with an impression that the secret documents were supposed to be bought by Venezuelan agents. It transpired later that – in line with their usual practice – FBI agents posing as Venezuelans had provoked the scientists. Former US envoy to the UN, ultraconservative J. Bolton contributed to the provocation by publishing in LA Times an article titled the Chavez Threat where he charged Chavez with launching a nuclear program. Bolton may be trying to reanimate the CIA lie that Chavez invited Tehran to develop Venezuela's uranium reserves in exchange for Tehran's nuclear technologies. Bolton claimed that Venezuela is the key threat to the region's nuclear-free status set by the 1967 Tlatelolco treaty and invoked other products of US spy ops such as allegations of Chavez's involvement with the Columbian insurgents and supplies of the Kalashnikov assault rifles to them, of providing cover to Hezbollah emissaries, and of pouring money into the movements of his supporters across Latin America or even into Mexican and Columbian drug cartels. Bolton urged the US intelligence community to put investigating Venezuela's involvement in the drug business in the Western Hemisphere on its list of priorities. The above is totally laughable – it is an open secret that the region's drug business is run by the DEA and the CIA.

Venezuela's new parliament will open in January, 2011. No doubt, heated debates loom on the horizon. There may be serious results as well, but of course this is not what the opposition got into the parliament for.