What UK defense minister was doing in Odessa, or a taste for farce 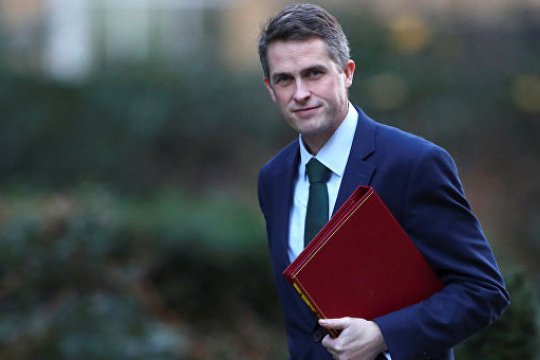 History repeats itself. This popular maxim also rings very true today. Many episodes of the Crimean War are still fresh on the memory of Russians, French and the British. Disregarding the sanctions and "annexation," Britons and French nationals keep coming to Sevastopol to take part in a historical festival, donning period costumes and engaging in mock battles.

And yet, the distant successors of those who fought Russia during that war still remember, on a genetic level, how Russian soldiers kept fighting on against the tallest of odds (during one of the battles fought  in Sevastopol, mortally wounded and bleeding members of a Russian regiment still refused to plead for mercy and, instead, continued fighting the enemy with their bayonets) even at lunch, after five in the evening, and, most unpleasantly, at night. The war fought not by the book, the freezing cold of the Crimean winter and the well-known "balaclava" headdress is something Russia’s foreign guests will never forget.

It still looks like the lessons of history have been lost on some representatives of the British elite. In December 2018, Britain’s Defense Minister Gavin Williamson arrived in Odessa in southern Ukraine to vent his outrage about the detention by Russia’s Coast Guards of three Ukrainian boats at the approaches to the Kerch Strait, and express London’s support for a second Ukrainian naval foray into the Sea of Azov. It was not Williamson’s first visit to Ukraine though – in September 2018, he bravely spent a whole 20 minutes on the line of disengagement in Donbass. [i]

London is backing up its military-diplomatic efforts with real action.

“At 20:30 local time, on December 17, 2018, the Royal hydrographic survey ship HMS Echo sailed into the Black Sea via the Bosporus Strait. This modern reconnaissance ship is designed to conduct operations in support of submarines and amphibious operations. It can share adapted information almost in real time. (...) This is the first NATO warship to enter the Black Sea in the wake of the Azov crisis to demonstrate the UK's support for ensuring freedom of navigation in the region,” Ukrainian expert Andrei Klimenko happily wrote. [ii]

In the mid-19th century, Britain regarded Russia as an enemy in the Big Game, and opposed it using political and economic means available to it. Simultaneously, it was the case of an empire facing off against another empire - in the Balkans, in the Caucasus and over the straits (Bosporus and Dardanelles). Britain no longer rules the seas, but its keen interest in strategic straits, such the Kerch Strait, is still very much alive.

London’s strategy, being implemented as part of the anti-Russian bloc, can best be described as “I’m doing all I can.” However, the former empire is playing an ever increasing role now that Ukraine is not being viewed by US President Donald Trump as an object worth of any effort. Still, there are powerful anti-Russian forces out there, which will not just sit and watch the presidential elections in Ukraine and, even though they have lost their patron in the person of the US president, they remain hell-bent on making Ukraine instrumental in their efforts to ramp up the conflict with Moscow.

Washington is reviewing international agreements and withdrawing its forces from Syria focusing instead on playing spy games, but now on its own territory, to fight the "Russian threat," "Russian aggression," and most importantly - "Russian intervention." The central events and characters here are the Mueller investigation, the case of Maria Butina, and the recent detention in Moscow of a former US Marine, Paul Whelan, on charges of espionage. [iii]

But this is not enough, so you need something else, more dramatic and attention-grabbing, preferably done by someone else.

No matter how opposed to Trump’s policies some top officials in the US government may be, they still can’t afford to openly defy the president and thus destroy the country’s power institutions. And here political analysts  come up with a very interesting version: “Therefore, England takes the burden of orchestrating the Ukrainian-Russian war in its own hands. Well, not England as such, but, rather, the real masters of both England and the United States (...) Poroshenko may not venture a provocation, and to make sure that he gets no ideas about giving up on the war, the British defense minister arrived in Ukraine. (...) Britain is bringing pressure to bear on Kiev to go to war with Russia in the coming week, period.” [iv]

Although a second foray into the Kerch Strait planned for the coming week never happened, the plan itself hasn’t gone anywhere. A follow-up to the provocation in the Kerch Strait has gone beyond the time frame outlined by the martial law President Poroshenko imposed ahead of the presidential election, but the threat of new provocations fraught with a confrontation  lingers on nonetheless.

The law "On the adjacent zone of Ukraine," signed by Petro Poroshenko in December 2018, provides a legal basis for actions by the Ukrainian military and diplomats by expanding Kiev’s border and customs control in the Black Sea.

"In the adjacent zone, the State Border Service of Ukraine will prevent violations of national immigration and sanitary legislation. Border guards will be able to stop vessels, inspect them, detain or seize vessels or their crew members, with the exception of warships and other state ships used for non-commercial purposes." [v]

The new law sets the stage for further provocations against Russia by portraying it as "an aggressor and invader," backing this up with “irrefutable evidence” and showing it on TV.

The coordinated nature of the actions and intentions by the “friends” of Russia in ensuring “free navigation in international waters” is too obvious to ignore. Following the provocation in the Kerch Strait, the US guided-missile destroyer McCampbell was allegedly spotted in the vicinity of a Russian naval base in Vladivostok.

US Pacific Fleet spokeswoman Rachel McMarr said that the ship had carried out a "freedom of navigation" operation.

“The USS McCampbell sailed in the vicinity of Peter the Great Bay to challenge Russia's excessive maritime claims and uphold the rights, freedoms, and lawful uses of the sea enjoyed by the United States and other Nations," McMarr told CNN.

She emphasized that “the United States will fly, sail and operate wherever international law allows.”

Britain’s policy of the past few years has been pretty strange. Execution-wise, its actions are perceived as a farce and essentially as a tragedy for the country’s political elite. London is taking cue from Kiev, with its actions and "projects" (the Skripal case and the Salisbury subproject) very much resembling Ukrainian projects. London came up with the “Skripal poisoning,” and Kiev – with the day-long “Babchenko's murder” circus.

Sadly, this anti-Russian trend translates into a real policy based on farce and fakes, which does not change the essence of London’s foreign policy projects based on fakes.

Ukraine, for its part, continues its attempts at “coercion to conflict,” which may bring about a clash of civilizations, since this is an attempt to influence the decisions of the “core states of civilization (Samuel Huntington). However, the conflicts that Ukraine has been involved in and has initiated are the result of outside bidding and made possible thanks to the support from and sanctions by external forces.

Ukraine’s foreign policy is by and large determined by the logic of its policy at home. Ending up as a zone of inter-civilization conflict, Kiev is willy-nilly trying to rebuild the cultural foundations of the Ukrainian state and society.

The West appears all set to extract Ukraine from the sphere of the political, economic and socio-cultural influence of Russia. It is within this framework that Kiev and all sorts of other actors are working as they try to achieve their domestic goals thus stoking up tensions and radicalizing both the country’s political forces and some elements of the Ukrainian society.

All this farce and grandstanding by European and overseas leaders and politicians still fails to smokescreen the potential threats to the security of the Russian Federation. In this sense, the Sea of Azov and the Kerch Strait should be viewed as a place where the West may attempt a series of “tests” similar to the November 2018 attempt by Ukrainian naval boats to break into the Sea of Azov. The recent “heroic” cruise by US naval ships 100 kilometers off Vladivostok, presumably to “challenge Russia's excessive maritime claims and uphold the rights, freedoms, and lawful uses of the sea enjoyed by the United States and other nations," could be repeated also in the Sea of Azov and the Kerch Strait, along the Northern Sea Route, in the Arctic and the Baltic Sea.

The Black Sea region thus becomes a model of counteracting the “sea claims of Russia.” Indeed, it is a really volatile region with an unstable Ukraine ready for any provocations, Crimea, reunited with Russia (plus the Crimean Bridge), a high-handed NATO member, Turkey, which maintains close contacts with both Russia and the West, and the Caucasus region. It poses a problem for Russia due to the flurry of potential and real threats existing there, but it is also a problem for Russia’s “friends,” because of the high degree of security of the Crimean border and other borders of the Russian Federation. This combination of security and threats makes the Black Sea region an ideal place for all sorts of provocations and endurance tests.

Well aware of Russia’s strength, the West is trying to test Moscow’s determination with small, albeit significant, provocations, such as the Ukrainian naval ships’ attempt to enter the Sea of Azov on November 25, 2018. The West is equally aware of Russia’s response to such provocations by Kiev. What is not so clear to the West, however, and London’s activity attests to this, is how Russia will respond to similar passages by multinational flotillas. This uncertainty could only stem from a desire to trigger a conflict or from misguided thoughts about Russia’s indecisiveness to enter into a serious confrontation with the West.

Whatever grounds London or Washington may have for organizing a second cruise to the Crimean Bridge, no matter how many ships will take part and the flags they will sail under, Russia will do all it takes to protect its territory, border, water area, and important infrastructure.

The question London has to answer now is how will the former empire get out of this situation? There are only two options available: either to stage ever new provocations or continue grandstanding and firing verbal broadsides.