What will Middle East gain from US’ "retreat"? 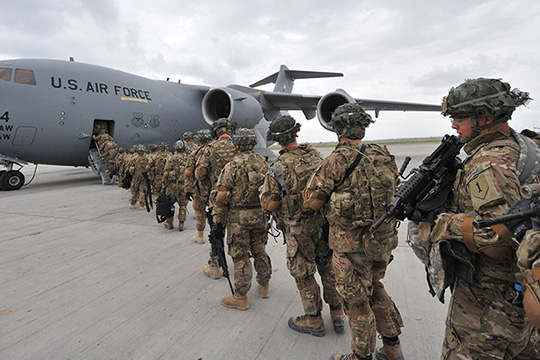 Throughout the year, American commentators have been sounding alarm over the weakening of the US positions in the Middle East. Optimists say Washington has intentionally been “cutting down on its commitments”. According to pessimists, America is quickly losing credibility amid an acute crisis of trust in its relations with its closest allies. Some of these allies are even working to harmonize relationships with Washington’s geopolitical rivals, or are looking for common ground to strike with those who are officially deemed "US enemies".

Experts say the policy of the Trump administration in the Middle East should be more consistent, both in conceptual and personnel terms. This policy should be devoid of any sudden or drastic moves which could only undermine trust between the United States and the Gulf countries, Yasmine Farouk of the Carnegie Foundation said in February. Over the past six months, there have appeared sufficient grounds to believe that Iran "is gripped by fear and experiences a sense of despair in the confrontation with the United States." However, the White House’s current policy on Tehran, which is lacking clear vision and trustworthy strategy, is sowing more and more seeds of distrust between America and its Sunni allies. This schism is the very "fundamental geostrategic success" that Iran has "sought to achieve over the past 40 years." Now, Tehran sees more and more “opportunities and advantages” for itself, wrote Kenneth Pollack, an expert with Foreign Policy [i], at the end of September.

From 1991 to 2010 the United States enjoyed “incontestable supremacy in the Middle East. Even on the eve of the “Arab Spring”, most states in the region depended on America for help and “understanding” in many vital issues. However, the results of the Middle East policy of recent years are disappointing, Dennis Ross and Dana Stroul from the Washington Institute for Middle Eastern Policy say. The recent moves taken by the Trump administration, starting from the US withdrawal from the “nuclear deal” in May last year, which aimed at forcing Iran to make concessions, have “fallen through.” The attempt to reduce Iran’s activities in the region to zero by tightening sanctions, which, according to the White House, were to deprive Tehran of resources to pursue a full-fledged foreign policy, “did not work to effect.” If President Trump had actually managed to “isolate” anyone in the region, then it is not Iran, but the United States. Experts believe that the ambitious statements that have been made by Washington on a daily basis were not supported by convincing action, political or military. The White House's flagrant reluctance to defend its allies deepens the gap between America and its partners in the Gulf Region. In addition, the policy of ill-thought sanctions led to the alienation of the European allies as well, without whom pressure on Tehran makes no sense [ii].

Donald Trump strongly disagrees with such criticism, emphasizing that his foreign policy is based on “pragmatism” and “objective interests”. Concerning the Middle East, these words can be understood in at least two different ways. On the one hand, the current US administration believes that “cooperation” implies, first of all, the promotion of the “monetization” of the alliance, which was unequivocally announced in the Trump National Security Strategy in December 2017. Allies and partners are required to "contribute" by allocating more funds for the purchase of American weapons.

On the other hand, domestic oil production in the US has increased significantly in recent years, primarily due to the introduction of shale oil extraction technologies. As a result, America is rapidly turning “into a major competitor” of oil and gas suppliers from the Middle East. The presence in Washington’s regional policy of many Cold War – era features, including the dominance of ideology and the division of countries into “friends” and “foes,” may also have a new, extremely unpleasant interpretation for the Persian Gulf states. What is meant is Washington’s attempts to breathe new life into maintaining (or formal strengthening - despite the apparent setbacks, for example, of the concept of “Arab NATO”), a political architecture in which the region is divided into warring blocs. Given the situation, the deeper the region plunges into the chaos of destabilization, the easier it will be for the United States to deprive Saudi Arabia of its current status as the “regulator” of the global oil market.

Meanwhile, the Middle East’s geopolitical landscape is becoming ever more polycentric as more and more countries of the region demonstrate their intention to “stand for their interests”. In this context, the Trump administration’s obsession with the “Iranian threat” is causing ever more bewilderment among some Arab allies, as Tehran, for its part, has put forward and supported initiatives to alleviate regional tensions. According to IRNA, on September 23, Iranian President Hassan Rouhani announced proposals "to ensure the safety of navigation in the region" and promote interstate cooperation in the Persian Gulf. The project, known as the "Hormuz Peace Initiative",  encompasses "both security and economic issues." "All countries of the Persian Gulf are invited to participate in a new format of regional dialogue," -  the Iranian president said. [iii] On October 1, Iranian Parliamentary Speaker Ali Larijani welcomed a statement made the day before by Saudi Crown Prince, Mohammed bin Salman, that he was ready to start a dialogue between the two countries [iv].

Six months ago, Riyadh, as well as Bahrain, unconditionally supported the US line for a tough confrontation with Iran. However, serious doubts were voiced by  leaders of Egypt, Jordan and Qatar. Kuwait, Qatar and Oman even came up in favor of diplomatic methods of resolving disagreements with Iran [v]. In recent months, this policy has also been backed by the UAE. However, on September 14, a number of Saudi Arabia's major oil infrastructure facilities came under a massive attack by drones and cruise missiles. Saudi Arabia and the US “have no doubts” that Iran is behind the attack. A lot will be clarified after the results of an inquiry by the international commission are made public: the publication of evidence that proves Tehran’s direct involvement in the attack could become a casus belli for the Saudis [vi].

In this case, America’s Arab allies will be waiting for the White House’s reaction, which puts the Trump administration “in a pretty difficult position”. Whether part of the leadership in Riyadh is ready to go all-in and strike at Iran on their own, in the hope that the United States will not be able to stay away in case of a new war in the Gulf, will become a relevant issue again. However, Saudi Arabia has demonstrated a "weakness of its army” in Yemen. And the blow against the Saudi oil refining facilities, whoever was behind it, has raised the question of the effectiveness of American means of control of regional airspace, as well as the combat readiness of the air defense system based on American technology. The absence of a clear and decisive reaction from Trump can ruin the authority of the United States, both in the Gulf countries and in the entire Middle East Region. In addition, this may have a negative effect on American voters. Meanwhile, “... America cannot and does not want to wage a war against Iran” [vii].

Russia’s position is aimed at resolving disagreements and potential conflicts in the Middle East through negotiation with the participation of all parties involved. In a recent interview with International Affairs Chief Editor Armen Oganesyan, Russian Deputy Foreign Minister Sergei Ryabkov expressed hope that “the crisis involving Iran will be settled without a new outbreak of conflict” [viii]. According to Ryabkov, Moscow believes in the triumph of common sense in the region,  which is being torn by several conflicts. In early October, in response to questions from the Valdai Discussion Club, the head of Russian diplomacy Sergey Lavrov  dwelled on Russia's vision of the challenges facing the region [ix]. "Undoubtedly, security must be ensured in the Persian Gulf, but Iran has proposals that are not directed against anyone, they are not exclusive, they invite all countries to join forces."

Russia, in turn, has come up with a proposal to begin a comprehensive and constructive dialogue on the concept of a Collective Security Treaty for the Persian Gulf with the prospect of its expansion to the entire Middle East. Addressing the participants in the Valdai Forum on October 3, President Vladimir Putin recalled how Moscow “together with partners of the Astana format” had brought together the interested countries in the region and the international community to launch a political settlement in Syria. The negotiations were joined by the United States. President Putin paid tribute to “President Trump’s courage and ability to take extraordinary steps”. The crisis involving the Korean Peninsula dissolved very quickly, he said, once the US administration moved from head-on confrontation to dialogue. The Syrian settlement  “may become a kind of model for resolving regional crises. And in the vast majority of cases, it will be the diplomatic mechanisms that will come handy. The use of force is an extreme measure, a forced exception,” -  President Putin emphasized. Moscow advocates convergence of efforts to address common threats. The latest initiative, which is based on this principle, is the idea of creating an organization “for security and cooperation, which, in addition to the Gulf countries, could comprise Russia, China, the USA, the EU, India and other countries concerned as observers” [x].

According to optimistic-minded American observers, the US leadership’s demonstration of restraint and caution on the use of force can have positive consequences – it could prompt countries of the Middle East to seek diplomatic solutions [xi]. But is Washington ready and able to “seize on the chance” and join international efforts to launch an extensive dialogue of all regional countries concerned? Up to now,  the Trump administration has demonstrated the potential to weaken, or even completely destroy,  multilateral institutions and formats, rather than create or support them. In the end, it is the “credo" of unilateralism that is behind the US doctrinal documents and foreign policy practice.

The Middle East faces a long and difficult search for solutions if it wants to successfully address many internal problems, which, in most cases, are knotty, to say the least. The process of overcoming the consequences of the “crises of the decade” will take years. Considering this, the Middle Eastern states will have to play an ever greater role in resolving regional problems. Contributing to this  will be the weakening of the former hegemon, which has been increasingly hinging on the use of force in recent years.  Russia’s return to the Middle East for securing a balance of strength will make it possible to avoid the detrimental consequences of underestimating the international dimension of threats coming from a number of regional conflicts. In addition, it will encourage a departure from the counterproductive policy of forming artificial “division lines”.