What’s going on with the Greenland ice sheet? 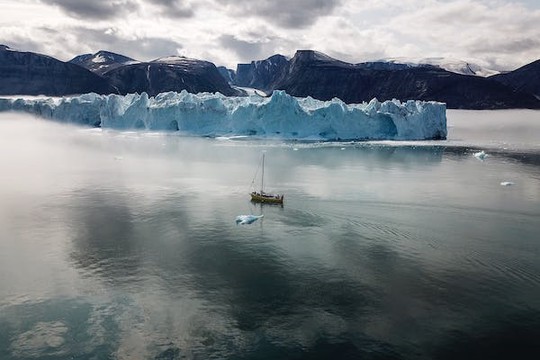 The Greenland ice sheet is losing ice faster than forecast and now irreversibly committed to at least 10 inches of sea level rise, writes with great concern Jo Adetunji, a field glaciologist, who was working on ice sheets for more than 30 years. Here are the highlights of his new article:

“I’m standing at the edge of the Greenland ice sheet, mesmerized by a mind-blowing scene of natural destruction. A milewide section of glacier front has fractured and is collapsing into the ocean, calving an immense iceberg.

Seracs, giant columns of ice the height of three-story houses, are being tossed around like dice. And the previously submerged portion of this immense block of glacier ice just breached the ocean – a frothing maelstrom flinging ice cubes of several tons high into the air. The resulting tsunami inundates all in its path as it radiates from the glacier’s calving front…

I’ve worked on ice sheets for more than 30 years. In that time, I have witnessed some gobsmacking changes. The past few years in particular have been unnerving for the sheer rate and magnitude of change underway.

A study published Aug. 29, 2022, demonstrates – for the first time – that Greenland’s ice sheet is now so out of balance with prevailing Arctic climate that it no longer can sustain its current size. It is irreversibly committed to retreat by at least 59,000 square kilometers (22,780 square miles), an area considerably larger than Denmark.

The critical questions are, how fast is Greenland losing its ice, and what does it mean for future sea level rise?

If every year were like 2012, when Greenland experienced a heat wave, that irreversible commitment to sea level rise would triple. That’s an ominous portent given that these are climate conditions we have already seen, not a hypothetical future scenario.

The Greenland ice sheet is a massive, frozen reservoir that resembles an inverted pudding bowl. The ice is in constant flux, flowing from the interior – where it is over 1.9 miles (3 kilometers) thick, cold and snowy – to its edges, where the ice melts or calves bergs.

It’s an understatement that the societal stakes are high, and the risk is tragically real going forward. The consequences of catastrophic coastal flooding as sea level rises are still unimaginable to the majority of the billion or so people who live in low-lying coastal zones of the planet,” - emphasizes Jo Adetunji.