When and how will the Korean War end? 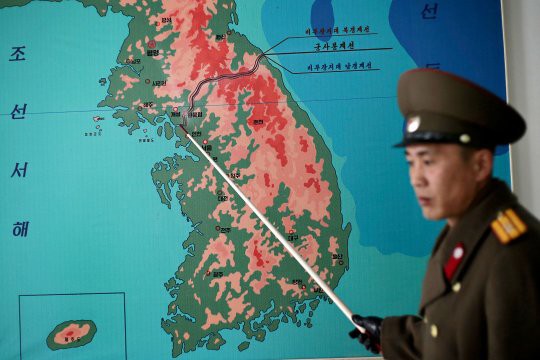 This issue is gaining momentum again, after reports that Beijing supports Seoul’s plans to officially confirm the end of the 1950-1953 Korean War. A statement to this effect was made by Director of the Central Foreign Affairs Commission Yang Jiechi as he met with Chief of South Korean National Security Agency Suh Hoon.[1]

Diplomats from China, South and North Koreas, and the United States have been in talks since summer this year conducting low-profile consultations on how to officially end the Korean War, which until recently was considered ‘suspended’ for an armistice. However, according to some sources, the parties involved differ on a number of issues concerning the agreement.

These issues are quite a few. South Korea is eager to declare the end of the Korean War, thereby guaranteeing security to Pyongyang and providing it with an incentive to waive nuclear weapons. Washington, however, demands that North Korea should take steps towards disarmament before there can be any talk of ending the conflict. Also, what is essential is that from the very start North Korea insisted on a full-fledged peace treaty that envisaged establishment of diplomatic relations between the warring parties, whereas South Korea called for a Declaration of the Cessation of War, rather than a Treaty, which should be signed after the denuclearization.

Furthermore, the United States is unwilling to include China in the list of signatories to the agreement. As for China, it wants to be among those who will bring the war to a close, the more so since Chinese forces took part in the war on the side of the North Korea in the past.

Incidentally, the  Soviet Union played a significant role in this war as well, providing North Korea with military advisors and advanced military hardware, including anti-aircraft defense systems and jet aviation. In the acknowledgment of military experts, Soviet air aces defeated the Americans in the air battle over the Korean Peninsula.

President Moon Jae-in wants to become a signatory to the agreement or join this historic event in any other way, in a belief that this will come as a good finishing touch to his term, which ends in March 2022. We need to recall that in 1953 South Korea refused to sign the Armistice Treaty, while North Korea signed it also on behalf of the Chinese general (more than one million Chinese “people volunteers” fought in Korea). For this reason, Beijing is set on becoming one of the signatories to the agreement now too.

Speaking at the 76th UN General Assembly in September, South Korean President Moon Jae-in called for “declaring an end to the Korean War”. In his opinion, this should be assisted by China and the United States. Reports from Washington say American experts are looking into the issue. However, North Korea’s Deputy Foreign Minister Lee The-song said adoption of a statement on ending the war was “premature”.[2]

Pyongyang viewed a peace treaty as a guarantee to its security and a precondition for further denuclearization. However, all the attempts on the part of North Korea to sign a peace treaty were rejected by the United States. Now, it looks like the roles have changed.

Given the situation, there is a fairly significant point related to the UN involvement  in the developments on the Korean Peninsula. During the Korean War, there appeared the so-called Joint Command, the responsibility for this Command was laid on the United States, which fought in Korea under the UN flag.

What is interesting is that 65 years after the signing of the Armistice Treaty, representatives of this Command – in fact, American servicemen – are still deployed along the 38-parallel division line. In the years of the Korean War, in an attempt to make its military operations look legitimate, Washington unilaterally renamed the Joint Command into “the UN Command” (though, in those years the share of American servicemen in this Command exceeded 93%).

Given this, South Korean president has every reason to suggest declaring an end to the Korean War within the framework of the UN. After all, it’s a UN Security Council resolution that paved the way to a military operation on the peninsula by American forces under the UN flag.

As permanent members of the UN Security Council and external guarantors of inter-Korean settlement, Russia and China are interested in a legal and political framework of this process, and thus, being aware that a Declaration on an end to the war, as the foundation of a peaceful regime, may change for the  better the legal bases of this long-running confrontation, are doing everything they can to secure this.