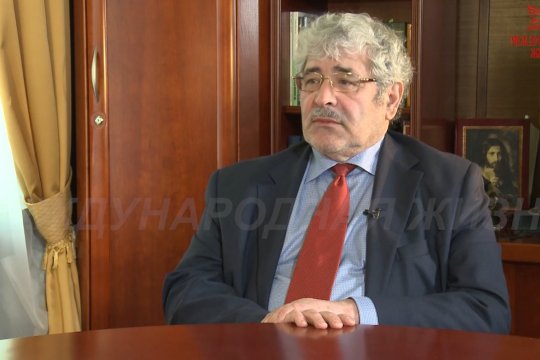 The coronavirus pandemic now spreading across the globe has once again raised the eternal question of what to do and who is to blame? Unable to answer the first question, many world leaders are now trying to answer the second, blaming each other for the spread of the virus. The Americans are blaming the Chinese, the Chinese are faulting the Americans, the Americans are pointing a finger at the Europeans, and so on and so forth. Everyone is blaming everyone. We’ve come full circle. We are discussing this whole situation with the Editor-in Chief of International Affairs magazine, Armen Oganesyan.

Why all this flurry of mutual recriminations over the spread of coronavirus? What do you think, Armen Garnikovich?

Well, I think that’s due to the lack of scientific knowledge about the nature of this virus. Maybe, as efforts to develop the vaccine continue, they will shed light on where this infection came from. The vacuum of objective scientific knowledge certainly gives rise to all sorts of mutual accusations, whether they are justified or not. For example, we have spoken to experts who said that they did not believe the conspiracy theory that the virus was planted by someone or it is man-made. Personally, I think this theory holds no water, because if it did, this would be suicidal. But can we really rule out a possible leak? This is what the United States is being accused of by China. And, by the way, for one simple reason: there is very little information from the US that the Chinese are requesting, information that not only the Chinese are interested in. Why a number of flu cases were mistaken for ordinary flu, only to eventually be diagnosed as COVID-19? The head of the US Centers for Disease Control and Prevention raised this issue in his recent report to Congress. An objective view… The lack of testing in the US is raising similar questions among the Chinese. And besides, there were military exercises held there too.

An official, a Chinese diplomat, by the way, tweeted, writing as a private citizen, that the virus could have been brought in by the US military. We have an interesting point here. From the standpoint of journalism and, in general, expert assessments, it looks like the coronavirus has put into high relief the issue of freedom of expression. How come some experts in America, in China, in Iran, who also have blamed the United States, are not allowed to speak out about this? What really surprised me is not so much  the fact that The Financial Times recently published the conclusion made by  one of the European agencies that Russia is using social networks to sow panic, that this virus was created artificially and is being used as a weapon, as that its remains to be seen whether it is man-made or not. When we have a European organization jumping to such a conclusion, then what kind of investigative journalism, what freedom of speech are we going to have? I am surprised that The Financial Times gave no comment about this whatsoever, no assessment at all, although if it belonged to the realm of journalism, it should have immediately responded by saying “why don’t you calm down a bit, guys?” It means that I, for example, don’t share this point of view, but someone else says yes, it could have been a leak, it could be man-made... Because to say that this is mutation, that we don’t know the nature of this virus, and even if we understand something about its nature, we still don’t understand how exactly it mutates, the pattern it follows. To say that one infects the other is to say nothing about the nature of this virus. In a situation like this, shutting up someone is an attempt to introduce censorship. I think that we have precisely such ill-intentioned things happening now. The thing is that the healthcare system in Europe and the US has shown very serious flaws. And is being criticized from within...

Sorry for interrupting you… The head of the European Commission said that an EU agency had noticed a flurry of misinformation, primarily being spread by Russia, related to the coronavirus pandemic. He argued that the evil Russians, as usual, want to undermine the Europeans’ trust in their healthcare system.

But is there anything left there to undermine? A very strange statement, absolutely unprofessional… In situations like this, social networks are usually abuzz, very often with all kinds of defamatory information and fake news. Moreover, this is an international phenomenon, not just Russian. They should better write about fake news about helicopters flying around in Italy spraying disinfectants. Interestingly enough, the very same news was spread via messengers here in Russia advising people to shut their windows after 11 p.m. because helicopters would be out spraying some substances and medicines. This means that people have no idea about the nature of modern-day social networks when they say that Russians are responsible for this, or that officials are behind it. This is baloney. Instead of bringing people together, new dividing lines, unthinkable, phantasmagoric parallels are being drawn, without any understanding that yes, social networks always cash in on situations like this, and not only in Russia. I’m sure that in Russia we also have such bloggers and messengers, who are sowing panic, which undermines confidence in the world. It is a hard fact. That’s why we so often talk about information security and say: “let us join forces.” Instead, we have insinuations, which are not supported by any serious facts and baseless allegations that we have heard before. There is some underlying explanation for why this is happening, of course. Indeed, people in Europe and America are very critical of their healthcare system. I think [Turkish President Recep Tayyip] Erdogan was right when he said: “Gentlemen, you put health care medicine into private hands. Now you complain that you have an uncontrolled situation. These problems have been piling up for years.” Secondly, some countries slept through the coronavirus outbreak. As I said, a lack of testing kits, etc. People don’t like this, but they still have to endure all this suffering, quarantines, self-isolation – small wonder they are outraged. Well, they may say that it’s the Russians who are sowing panic and undermining what has already been undermined: people’s trust in the healthcare system. It was undermined even before the coronavirus came along; this criticism could be heard in the US, Europe, in many countries. What is there to undermine when there is nothing to undermine?

Speaking of the healthcare system, above all in Italy, I remember my friends once telling me that women who were soon to give birth would show up for an appointment only to be told to come a year later, when they would have already become mothers, all this because there were not enough doctors around to tend to them. So much for the healthcare system they have there.

I’m not saying that our healthcare system is without a flaw, of course. Yes, it’s more important for us to build our own. But we simply can’t ignore these unfounded statements, which, as I want to emphasize again, very much smack of censorship of people's opinions, even if these are social networks. It is those insisting that this [virus] is man-made, who stick to this conspiracy theory, who actually are subversive elements. And they start going after journalists and experts by either denying them accreditation, or access to airtime or print media - a gag order of sorts. [These journalists and experts] simply do not exist.

There has already been such an exchange of mutual demarches between the US and China.

Yes, cancellations of accreditation for such major outlets as The Wall Street Journal in China, and of equally reputable Chinese newspapers in the United States. Instead of all of us, professional journalists, letting people with different views freely speak their mind. In this magazine we prefer to see this as some kind of a natural, spontaneous phenomenon, but I will never shut up anyone who says otherwise or wants to express a different opinion.  As Voltaire famously said, “I disapprove of what you say, but I will defend to the death your right to say it.” This is a principle that our freedom-loving Western media should always bear in mind.