"Where the Russian flag has been hoisted, it shall never be lowered." Who and why sold Russian America (Part III) 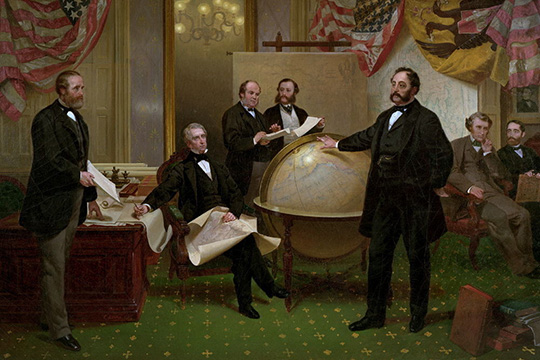 Enlisting the support of Emperor Alexander II, Grand Duke Konstantin Nikolayevich started to vigorously promote the idea of selling Russian possessions in North America in the corridors of power in St. Petersburg. To achieve this goal, he drew up a five-point list of evidence in favor of the sale of Alaska.

In his search for arguments, the Grand Duke, who had served as the permanent chairman of the Russian Geographical Society since 1845, made an “unexpected discovery” of Russian possessions in Alaska away from the Asian parts of the Russian mainland. This was the primary, though dubious, argument in favor of the need to cede Alaska to the Americans. Why not sell to the United States or any other country uninhabited places like Chukotka, Kamchatka, Sakhalin or some Russian islands in the Pacific Ocean? Russia’s rulers stuck to faraway territories of their empire, while putting other territories up for sale. The allegations about the need for Russia to focus on the development of the internal regions of Siberia and the Far East during that time simply hold no water.

While lobbying his project, the Grand Duke also declared the Russian-American Company a money-losing venture – a claim that was flatly refuted by the financial reports filed by the RAC, which held strong positions in the Western Hemisphere and was generating steady profit. Taxes regularly paid by the company to the state coffers replenished the treasury and were quite significant. However, as RAC shareholders, the Romanov family might have wanted more, but, again, in order to get richer they did not need to sell Alaska. Even if they considered the RAC financially inefficient, then why not set up a fundamentally different company or even several new companies on the Russian-owned territories in North America? They could also allow private Russian businessmen to work in Alaska, who would pay fixed interest on their profits either to the state or relevant structures controlling this process, etc. This second argument of Grand Duke Konstantin Nikolayevich was totally illogical: he argued that the RAC was unprofitable and, therefore, the territory it was working on was to be sold.

Konstantin Nikolayevich also tried to justify the proposed deal by the difficult financial situation Russia found itself in the wake of its defeat in the Crimean War. True, the state treasury was empty, but the sale of Alaska could not remedy the situation, since the money Russia could earn from the possible transaction - $7.2 million, or 10 million rubles - would still be just a fraction of Russia’s annual budget and its external official obligations (respectively 500 million and 1.5 billion rubles). The Grand Duke also argued that in the event of a military attack on its possessions in North America, Russia would neither be able to protect those territories, nor hold them. This reasoning contrasted with the events that had happened in the Far East during the Crimean War: in 1854, Russian sailors, commanded by the military governor of Kamchatka, Vasily Zavoiko, won a brilliant victory over the superior forces of the Anglo-French squadron, which attacked the Peter and Paul port - the main stronghold of Russia in the Far East.

The events that followed proved the fallacy of predictions about the possible loss of Alaska in the event of a military conflict in the region. It is worth mentioning the fact that, acting on the Grand Duke’s orders, in 1863 two Russian naval squadrons - the Atlantic one under the command of Rear Admiral Stepan Lesovsky, and the Pacific one, commanded by Rear Admiral Andrei Popov - were dispatched to the US shores and entered the ports of New York and San Francisco. The almost yearlong presence of the Russian fleet off the American coast prevented a British intervention in the US Civil War of 1861-1865. The Imperial Russian Navy thus helped avoid an international conflict in the region, ensuring the security of US possessions both on the Atlantic and Pacific coasts.

The Grand Duke’s final argument in favor of a voluntary cession of Alaska to the Americans is staggering with its ingenuousness. A member of the Russian royal family openly argued that a voluntary transfer of Russian America to the United States would certainly help strengthen friendly ties between the two countries. Here the Grand Duke was right, since the Americans were sure to embrace this proposal. But why not hand these Russian possessions in North America to Britain, which owned territories in the immediate vicinity of Russian America? I am sure that the British would be equally happy to get such a surprise gift, and relations between Russia and Britain would undoubtedly improve. Moreover, the British might be ready to pay more for Russia's generosity.

Grand Duke Konstantin Nikolayevich’s argumentation in favor of the sale of Alaska to the US is firmly recognized by present-day experts on Russian America as the official version of the root cause of that deal. However, besides being lightweight and dubious, this argumentation is also criminal in nature, because due to its alleged “universality,” it essentially allows and even justifies the handover of not only Alaska, but of any other Russian border territory to a foreign state. This kind of reasoning is absolutely unacceptable, regardless of whether we are talking about the Kuril Islands in the Far East, or the Kaliningrad Region in the west.