"Where the Russian flag has been hoisted, it shall never be lowered." Who and why sold Russian America (Part II) 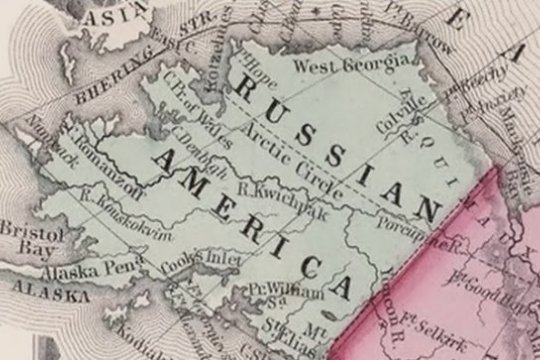 Scientific studies and media publications dealing with the history of Russian America, offer a large variety of polar assessments of the activities of the Russian-American company (RAC), with some authors describing is exclusively as a state-owned enterprise, while others viewing the RAC as a family business of the Romanov dynasty.

First of all, I believe that we can’t say for sure that the RAC was a joint-stock trading enterprise or a state institution. The company’s authorized capital, just like that of any other joint-stock firm, came from contributions by investors. What made the Russian-American company so special was the top-level sponsorship it enjoyed, and the high status of its shareholders, including members of the royal family, the Emperor, the Empress, the Heir Apparent, as well as Cabinet ministers, admirals, etc. The company’s managers had the privilege of informing the Emperor in person and were relieved of supervision by the local administration. The company’s board of directors was moved from Irkutsk to St. Petersburg, and its chairman was appointed by the Emperor for a term of five years.

The Russian-American company was also a part of the state apparatus, camouflaged as a trading enterprise, alternately subordinate to either the Ministry of Commerce and the Ministry of the Interior, and later placed under the jurisdiction of the Sea Ministry. The company also differed from other joint-stock firms in that its employees were granted official posts and given state awards for their work in a private organization. The RAC also received state loans, and was considered as a regimented enterprise, as foreigners were barred from working in the company.

In Russian America, all activities were monopolized by the RAC and all Russian possessions in North America were strictly off limits to private capital, Russian included. The company had its own financial system and a local currency ( the mark), which ensured it a certain degree of autonomy and independence. All this made it easier for the company’s main shareholders, namely the Romanov family, to control its activities. Having full control over the administrative and economic management of the Russian enclave in North America, the RAC had effectively become the family enterprise, simultaneously serving as a government agency and a private joint-stock company.

In Russian history, Emperor Nicholas I has always been overly-ideologized, with his reign traditionally presented as a time of doom and gloom, especially during the Soviet period. Communist party historians associated Nicholas I exclusively with the Decembrist uprising on Senate Square in St. Petersburg. In fact, Nicholas as an autocrat was an able statesman and business executive, who is known to have never supported his grandmother Catherine II’s plans of creating a separate Siberian kingdom as part of the Russian Empire.

Catherine II’s plan was designed to emulate the type of relations that existed between the British Empire and its companies in Asia, above all with the powerful East India Company. She ordered to use the Tobolsk and Irkutsk provinces as “proving grounds” for that experiment, granting the regional administrations special rights to develop contacts with neighboring countries, issue their own Siberian coins, etc.

Ascending the throne, however, Nicholas I cancelled all those privileges and banned the circulation of the “Siberian currency” in the region. In an official statement, he emphasized that Siberia was not a colony, but the most important and integral part of the country, thus proving the prediction once made by the great Russian scientist Mikhail Lomonosov, who famously said that “Russia's power will grow with Siberia and the Northern Ocean, and reaches to the main European settlements in Asia and in America.”

During the 20th century, Lomonosov’s words were substantially corrected by the Bolsheviks, who urged the people to focus exclusively on the development of the riches of Siberia and the Far East.

Nicholas I, not in words but in deeds, supported those who stood up for Russia's interests in this faraway region. This support was best reflected in the case of the naval officer and researcher, Gennady Nevelsky. In 1850, unbeknown to his superiors, he explored the lower reaches of the Amur River and founded there the first Russian settlement - Fort Nikolayevsky, now known as Nikolayevsk-on-Amur. Learning about his insubordination, the government wanted to bring Nevelsky to court for his unauthorized actions and to demote him to the rank of sailor. The incident was reported to Nicholas I, who said: "Where the Russian flag has been hoisted, it shall never be lowered."

Based on the information provided by Captain First Rank Nevelsky, Nicholas I issued a decree on April 11, 1853, to expand the area of the Russian-American Company’s responsibility to the development of Sakhalin Island, thus making the company a full-fledged owner of that newly-acquired territory. The Emperor’s ultimate goal was to create a single administrative and economic region, where the Bering Sea would become an inland sea of Russia. Nicholas’ death on March 2, 1855 nipped that plan in the bud. Just a year later, Sakhalin was taken away from the Russian-American company and transferred to the jurisdiction of the Governor-General of Eastern Siberia.

With the Crimean War over, Emperor Alexander II and his younger brother, Sea Minister Konstantin Nikolayevich, had to fully experience the bitterness of defeat. The Paris Peace Treaty of 1856 summed up the results of that military campaign. Russia was not allowed to have a navy, arsenals and fortresses on the Black Sea. This raised concerns about the possible loss of Russian possessions in North America. All the more so since the US government, acting in line with the Monroe Doctrine (1823), prevented the European powers from acquiring colonial territories in North America. The Americans had also been successfully squeezing Europeans out of the American continent. In the first half of the 19th century, the United States purchased Florida from Spain, Louisiana from France, and had California and Texas annexed from Mexico. The country’s very name - the North American United States - spoke for itself, and the Americans made no secret of their intention to extend their power throughout the entire continent.

Meanwhile, the Romanov family was having second thoughts about the successful work being done by the Russian-American Company. On the one hand, at a meeting of the company’s shareholders, the Romanovs praised the trading operations carried out by the RAC, which kept making profit even despite the fact that Russian America had been cut off from the Asian part of Russia during the Crimean War.

On the other hand, the Romanovs were worried by the company’s growing economic independence, self-sufficiency and its rising sway in the Pacific region. In 1854, the RAC inked an agreement with Britain’s Hudson Bay Company, which ensured the neutrality and inviolability of both companies’ territories in North America, notwithstanding the fact that Russia and Britain had fought each other in the Crimean War. The following year, Russian Admiral Yevfimy Putyatin reached the shores of Japan on ships provided by the Russian-American Company. His mission to Japan resulted in the signing of the Treaty of Shimoda, which established diplomatic and trade relations between the two countries.

As a result, the Russian-American company became a full-fledged trade, diplomatic and political representative of the Russian Empire in the region. This sent a clear message to the world that the RAC was now the mainstay of Russian presence in North America. The Romanovs were equally disturbed by this new balance of power, with Grand Duke Konstantin Nikolayevich particularly worried by the company’s undue independence and the uncertain future of Russia’s relations with the United States. His personal prestige was at stake, because as a Sea Minister he was personally responsible for the security of Russia’s possessions in the region, both during war and in peacetime.

His limited resources preventing him from carrying out this task properly, the Sea Minister decided to cut this Gordian knot once and for all. The Grand Duke apparently thought that a voluntary concession of Russian America to the United States, would not only eliminate the hypothetical threat of a military clash with the United States, but would also stabilize the situation in the region for decades to come. All he had to do now was to convince the Romanov family that this was the only right way to go.