Whispers and Screams of Edvard Munch: a large retrospective opened at the State Tretyakov Gallery 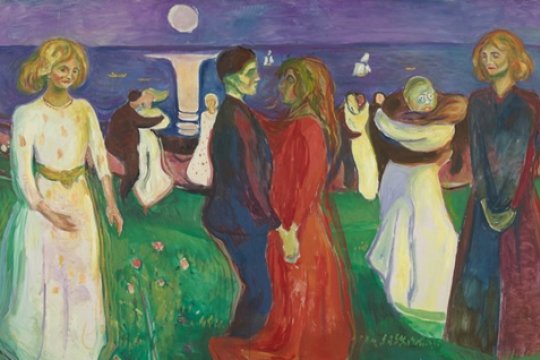 The State Tretyakov Gallery presents a long-anticipated retrospectiveby the world-famous Norwegian artist Edvard Munch, the founder of expressionism in European painting. The scope of the show is unprecedented: the exposition located at two floors of the Engineering Building includes 64 paintings, 37 graphic works as well as photos and memorial objects from the Munch Museum in Oslo that houses the largest collection of the master’s heritage. While the museum in Oslo, founded in 1963, is going through a major reconstruction to resume its operation in 2020, part of the collection travels around the globe to popular venues and participates in different exhibition projects, but the retrospective in Moscow is the largest one. 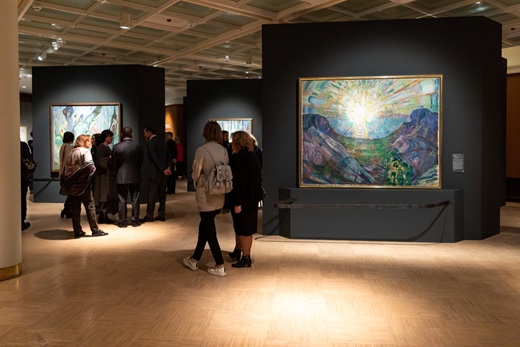 ”Edvard Munch. Dance of Life” at the Engineering Building

“I was looking forward to this opening in Moscow for a long time. It's a great joy and a big honour to present the exhibition of our great artist here, in Russia. And it's the largest exhibition we have ever launched elsewhere”, said Stein Olav Henrichsen, the Director of the Munch Museum, at the opening last week. The exhibition entitled ‘Edvard Munch. Dance of Life’ is the result of international exchange between museums. “The museum cooperation programme includes three exhibitions of Russian art – the first one ‘The Swan Princess’ that includes works of the late XIX-early XX century from the collection of the Tretyakov Gallery is currently on the display in the Munch Museum in Oslo. Two others - Russian avant-garde and works of Russian artists of 1910-1980 will take place in the future”, Stein Olav Henrichsen added.

On her behalf, Zelfira Tregulova, director of the Tretyakov Gallery, expressed her deep gratitude to the Embassy of Norway for the support of the project and the Munch Museum for “incredible generosity in supplying the best artworks for the exhibition”, labelling the current project as “a clear-cut example of museum partnership”. Despite the fact that Munch’s heritage is very extensive, his works are hardly represented in Russian museum collections except for one painting and one graphic work from the Pushkin State Museum of Fine Arts, which are also included into this exhibition. An exhibition of paintings and graphics from the collections of Norwegian museums was last held at the State Hermitage Museum 35 years ago, so the current show is the first display of the oeuvres of the outstanding Norwegian artist for the modern audience. 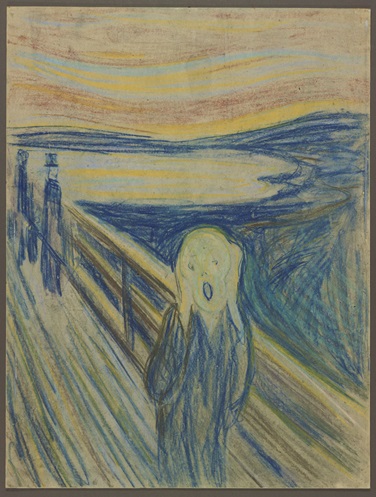 It won’t be an exaggeration to say that it will be a unique opportunity for a broad audience to rediscover the author of “The Scream” (1893). This seminal painting is considered not only one of the most expensive artworks in the world (it was sold at the auction in 2012 for a record amount of 119, 9 mln. dollars), but also one of the most often quoted images of the 20th-century art.  The early graphic version of “The Scream” was brought to Moscow. Speaking at the exhibition opening Stein Olav Henrichsen emphasized that this fragile piece rarely leaves the museum – it has not been exhibited since 2004, but an exception was made for the retrospective in Moscow. 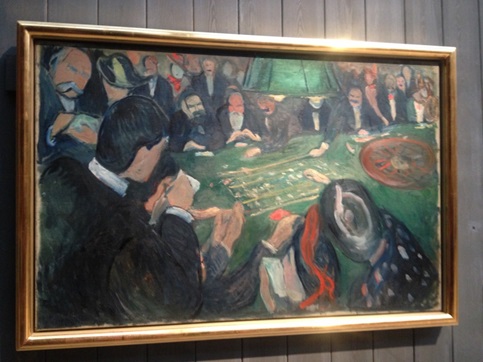 The aim of the Moscow exhibition is to open to the viewer the depth, ambiguity and diversity of the artist’s works.The catalogue published in Russian for the exhibition includes an article by a prominent Norwegian art historian and curator Øystein Ustvedt which he entitled «More, than a Scream», highlighting that Munch, whose long and prolific artistic career spanned over five decades, was not only the founder of expressionism, but also an outstanding graphic artist, a man of letters and a great photographer. 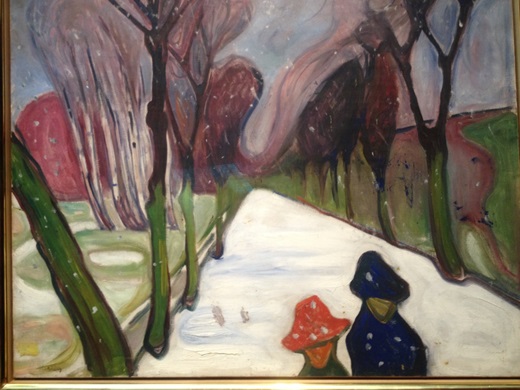 The exhibition includes works from all major cycles and series of the artist which he continued to upgrade over the years. Among them are “The Dance of Life”, “The Kiss”, “Madonna”, “The Girls on the Bridge”, “Vampire”, “Puberty” and others.It's likely that for most viewers the artworks from Munch’s later years will become most unexpected: he deals with such themes as friendship, love, nature and its beauty. 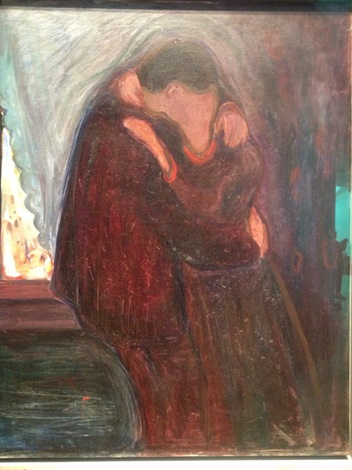 ''Munch used to say that his art led him to light and that the aim of his art to lead the others to Light. One can see that the Sun shining in some of his works including the ones he created for Oslo University. I see Munch as a courageous knight who does not bask in dark senses of human life and nature, but attacks it, takes it out to part with it,” -- says Tatyana Karpova, the exhibition curator. Munch's unsurpassed ability to project his spiritual search and human emotions to portraits and landscapes made this artist especially attractive for a contemporary viewer. The exposition includes several sections, which are grouped thematically, by Munch's genres and types of creativity:“Landscape”, “Artist and Model”, “Portrait”, “Self-Portrait”, “Graphics”, “Photography”. The center of the exposition, which is the largest section of the exhibition, is the series of paintings “The Frieze of Life”. 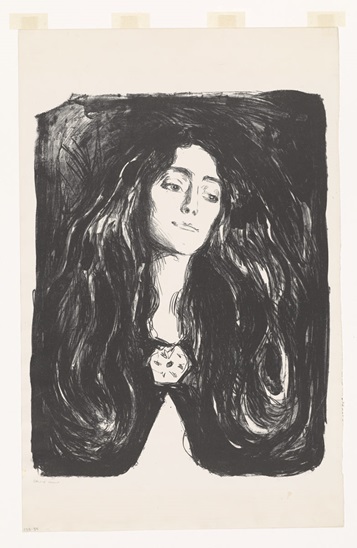 ''His life was equally interesting and the show includes his portraits and self-portraits, fragments from his diaries. Munch was a good writer, who took a lot of efforts to shape his literary skills and to work on his mindset”, Tatyana Karpova explained. The cross-cutting theme of the exhibition is the influence of Fyodor Dostoevsky on the formation of the artist’s worldview and figurative thinking -- a number of research projects were lately dedicated to this aspect of Munch’s Dostoevsky and Ibsen were Munch's favourite writers. The exhibition displays books by the Russian writer as well as monographs about him from Munch’s personal library. 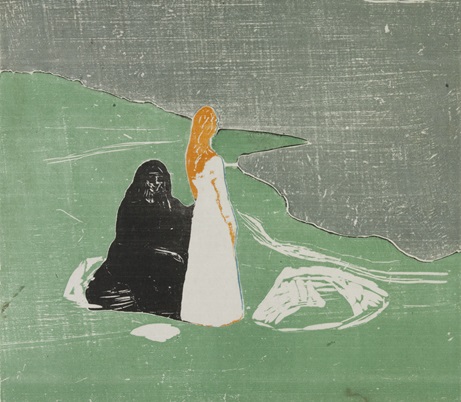 Graphic works are as important as the master's oils: over his long artistic life Munch created more than 700 graphic works becoming one of the most important graphic artists of the 20th century, who started as a painter, but later broadened his pictorial arsenal and technique. At the turn of the 20th century the artist got interested in technical innovations of the time and a separate section of the exhibition is devoted to Munch as a photographer. Munch’s photos demonstrate an interest in the spooky possibilities of photography that he used for a deep self-analysis: the artist experimented with exposition, unusual angles and in a way pre-empted the contemporary fashion for “the selfie”. However, he wrote in the 1890s: “Camera cannot compete with brushes and palette since it cannot be used in Hell or in Heaven”. 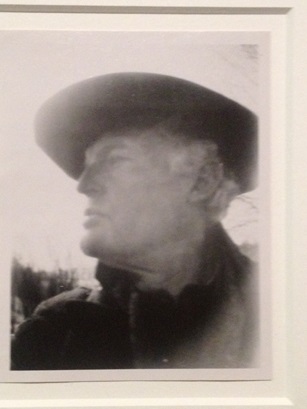 For the Tretyakov Gallery the current show is the first stage of a long-term “Scandinavian project”, which will include exhibitions of artists from Sweden and Finland. The display of famous North European painters’ works expands the perception of the Russian culture context and allows to trace the connections and parallels between Russian and Western European art. An international educational program under the patronage of the Embassy of Norway was prepared specially for the exhibition; lectures on Munch, presentations of books and film screenings will help to understand better the inner world of the artist and his closest environment. The participants are historians of art, writers, publishers, translators and artists from Russia, Norway and Georgia. The exhibition is open from April 17 to July 14, 2019.

Images: courtesy of the Tretyakov Gallery Press- Department and by Elena Rubinova