Who Are the Real Pirates in Somalia? 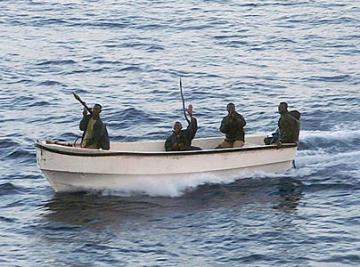 The UN plan, however, is essentially limited to prosecuting pirates and contains no mentioning of the struggle against piracy as a phenomenon, thus failing to address the reasons behind the problem.

According to the UN Secretary General, the number of piracy-related incidents grew over the past two years – from 111 in 2008 to 217 in 2009, plus 30 attacks were reported in the first quarter of 2010. From a broader perspective, the question is: are all of the above incidents indeed attributable to pirates?

Russian marines took in custody several pirates last year during the operation against a gang which hijacked a Russian ship off Somalia’s coast, but the detainees never faced justice. Details of the story remained obscure. It was reported initially that the Russian prosecution opened a case in accord with Article 277 of the Russian criminal code titled Piracy, but the members of the gang were released – and tentatively perished in the sea - shortly thereafter... The explanation is that the Russian criminal code applies exclusively to Russia's territory and Russian courts lack the jurisdiction to conduct trials of pirates over attacks against ships outside of Russia's territorial waters. In the latter case, the applicable definition of piracy is given by Article 101 of the 1982 UN Convention on the Law of the Sea. This should be no reason to let perpetrators of the attacks avoid prosecution – they can, for example, be put on trial for robbery in the sea.

The key legal question in the piracy cases is whether the international community is indeed encountering pirates and if it is – are they Somali pirates? The 1982 Convention states clearly that piracy is an act perpetrated in the open sea, that is, not in any country's territorial seas and adjacent zones. The 1982 Convention limited the maximal width of a territorial sea to 12 nautical miles(roughly 22 km), but Somalia had set its territorial sea width at 200 nautical miles (370 km) by its Law # 37 of 1972. The latter law establishes that only ships under the Somali flag or those with a license from the Somali government are authorized to sail or fish in the country's territorial waters. Similarly, several countries – Congo, Benin, Ecuador, Salvador, Liberia, and Peru – set their territorial sea widths at 12 nautical miles, meeting with no objections from others as there are no legal grounds for disputes over the matter.

Problems arise in the case of Somalia solely due to the fact that the country has no effective central government, and the demise of the Somali statehood opens vast opportunities to loot its natural resources. Somalia was under pressure – especially from France, Norway, and Spain - to scrap the 1972 law during the reign of Mohamed Siad Barre whose ouster in 1991 triggered the country's collapse. Several countries hoped the waters would be opened for fishing and, moreover, oil grands were also keenly interested in the region.

Considering the specific navigational situation in the region, it would be a reasonable view that the ships attacked by pirates off Somalia's coast actually invaded the Somali territorial waters. Moreover, in many cases the hijacked ships sailed there with the purpose of illegal fishing or commerce and in fact could be regarded as perpetrators of piracy. For example, Ukraine's Faina was carrying an arms cargo.

The incidents off Somalia's coast do not constitute piracy. Trials of the “Somali pirates” were conducted in a number of European countries and led to verdicts in which piracy was not mentioned. In June, 2010 five Somalians faced charges of piracy in the Gulf of Aden at the Rotterdam court but were eventually sentenced to five years in jail for robbery (I even find the robbery charges unfair as in the case Somalians used force against those who invaded the Somali territorial waters).

Who are the real “Somali pirates”? Neither legally nor de facto, the citizens of the war-ruined Somalia count as such – acting illegally, they do fare for themselves in the 200-mile territorial waters and on the 350-mile marine shelf which belong to them. It is even more true that those who defend the zones against various predators are not pirates. The real “Somali pirates“ are those who have engineered the collapse of Somalia's statehood or are taking advantage of the situation to squeeze natural resources from the country. The new UN plan is not intended to fight these pirates. Hopefully, the founders of the new tribunal will make the same mistake that was made when the former ones were established. The tribunal will not stop the looting, but – if international defenders are daring enough - inadvertently it will help unmask the root causes of what is happening. Therefore, the idea of a new international anti-piracy tribunal is more than welcome.