Who caused the Holomodor in the non-Soviet parts of Ukraine? 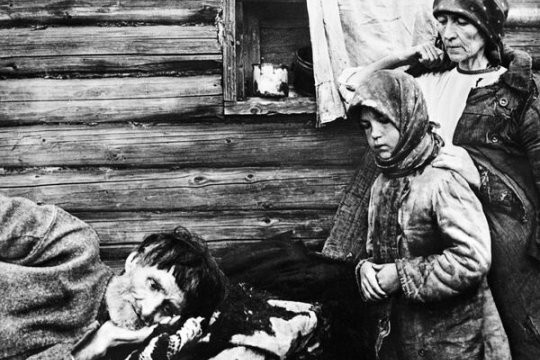 In the early 1930s, the global economic situation was anything but good. The US and Europe were struck by mass unemployment and surging prices. The Soviet Union was experiencing similar problems. In 1932-1933, a mass famine swept the country which was later dubbed ‘Holodomor’ in Western media and public propaganda promoted by some post-Soviet countries. Today, the term is predominantly used to describe the Great Famine in the USSR’s Ukraine.

The truth is, however, that certain areas of modern Ukraine weren’t part of the Soviet Union in the early 1930s. Today’s Lvov, Ternopol, Ivano-Frankovsk, Volyn and Rovno provinces were part of Poland, the Chernovtsy province and parts of today’s Odessa region were part of Romania, and Transcarpathia (the Zakarpattia province) was a province of Czechoslovakia. The territory of modern Ukraine was split between four countries, i.e. the USSR, Poland, Romania and Czechoslovakia.

The social and economic situation in Western Ukraine in the 1930s was much worse than in most of Poland due to the economic backwardness of these territories compared to Polish provinces and the government’s general negligence of Western Ukraine’s problems. And even though Lvov was considered Poland’s third major city after Warsaw and Krakow, many Hutsul (i.e. Ukrainian) villages were still plagued by extreme poverty.

In 1932, Polish newspapers reported that 88.6% of households in the rural Hutsul Land were starving, with a total of 40 hunger-ridden villages in the Kosov (Kosiv) district, twelve in Nadvornaya (Nadvirna), and ten in Kolomyia. Starving people with bloated stomachs literally died in the streets. Dying locals of all ages lying on the roads were not an uncommon view at the time. Those who could still walk tried to find food in nearby villages.

In the Kalush Voivodeship (province), entire households died of hunger. Typhoid fever and tuberculosis spread among the malnourished population increasing the death toll. Some utterly savage incidents were reported. Thus, a peasant in Zdunska Wola tried to sell his 18-year-old son at the local trade fair to save the other family members from hunger.

And these reports were not the product of Soviet propaganda – they were published by many Polish newspapers. Western media were also informed of the Great Famine in western Ukrainian provinces. Thus, the Ukrainski Shchodenni Visti (The Ukrainian Daily News) printed by Ukrainian immigrants in the US reported, “In rural areas, entire families, swollen with hunger, lie dying in their houses. Crowds of freezing and hungry Hutsuls are wandering from village to village asking for bread and potatoes. Typhoid fever is claiming the lives of the young and the old…”

Correspondent with the Polish newspaper, The New Hour, O. Travsky wrote at the time, “Up to 37% of all property in the Stanislavov Voivodeship and 49% in Polesie belonged to Polish landowners. In the lean years, peasants would receive every 16th or 18th sheaf of grain for their work on a Polish estate. In March, up to 40 villages in the Kosov district were starving, and twelve and ten villages in the Nadvornaya and Kolomiya districts, respectively. People are bloated from hunger and drop dead as they walk. The famine is most severe in the villages of Perekhresne, Staryi Hvizdets and Ostrovets. The hunger caused a surge in typhoid fever and tuberculosis cases.”

In another issue of The New Hour, Travsky reported on the situation in the Hutsul Land again saying, “I want to apologize to my Hutsul brothers for not believing their stories about the Hutsul villages stricken by Great Famine, but I saw it with my own eyes in Kolomyia. On top of that, the starved population of Western Ukraine is suffering from national oppression: while a Krakow Voivodeship citizen pays 30 zloty of poll tax, a resident of Western Ukraine is charged 35 zloty. Greedy colonists are cutting down Carpathian forests rapaciously.”

Meanwhile, Lvov-based newspapers reported that West Ukrainians in Transcarpathia were living in extreme poverty. There were villages in the Kalush Voivodeship where entire households perished of hunger. After the Polish government banned timber harvesting, the Hutsul population was left without the source of income especially when the crops were poor. And since the government did not support the starving Ukrainians, entire families died of hunger.

On January 9, 1932, German newspaper Deutsche Allgemeine Zeitung reported, “A three-year-long economic crisis and the enslaved position of peasants has caused the collapse of the Polish agriculture which is backward and inefficient enough as it is. The tax arrears in agriculture have amounted to one billion zloty (one zloty equaling 22 kopecks). The state is on the verge of bankruptcy and shaking more and more money out of the poverty-stricken peasants. The Ukrainians and Belarusians suffer from these extortions the most. When a court bailiff comes, everyone in the village is terrified. The bailiff is usually accompanied by guards and brokers and they sequestrate all the property that is of any value and it’s immediately sold off dirt-cheap.”

But how did it happen that large parts of Western Ukraine ended up in such a dire situation? First of all, when Poland’s government imposed a ban on wood harvesting in the mountainous regions of Western Ukraine, it stripped the Hutsuls of their traditional trade they relied on to make a living, especially in the lean years when the harvest was bad. Another huge contributing factor was the Polish government’s policy of discrimination against the population of Galicia and Volyn that was launched right after the two provinces had joined Poland. This effectively meant that the starving Hutsuls weren’t receiving any state support. The policy’s goal was to promote the Polonization of Eastern Galicia, Volyn, the Kholm (Chelm) Land, Podlachia and other Polish territories predominantly inhabited by ethnic Ukrainians, i.e. Hutsuls and Galicians. The plan was to assimilate and completely merge Ukrainians with the Polish population or drive the unwilling ones out of Poland.

Warsaw used all possible methods of discrimination against Ukrainians including military, police, cultural and economic pressure. Many Ukrainian schools were closed and over 77% of the teaching staff were replaced with Poles. Books were mostly published in Polish. Poland’s secret services carefully prevented any attempts by Ukrainians to establish national political organizations. However, several nationalist groups did appear despite all the efforts and were relentlessly persecuted by the Polish police. But it was the economic discrimination that had contributed the most to the famine.

As early as 1920, a special decree was issued ordering the colonization of the eastern Polish territories inhabited by Ukrainians. The decree stipulated that Poles should be relocated to these lands, in particular former servicemen of the Polish Army, creating de-facto military settlements. Between 1920 and 1928, the government allotted 260,000 hectares of land in the Volyn and Polesie provinces for relocation purposes. A total of 20,000 trained Polish servicemen moved there not only to plough the land but also to protect Polish national interests on the country’s eastern territories.

Apart from these servicemen, 60,000 civilian colonists relocated to Western Belarus, Western Ukraine and Eastern Lithuania, all controlled by Poland at the time. They were given a total of 600,000 hectares of land throughout the 1920s. One Polish household would receive a land plot of about 20 hectares on the average, sometimes a bigger one but no more than 45 hectares.

By sending Polish colonists eastwards, Warsaw was killing two birds with one stone. The settlement program in the east helped ease the social tensions building up inside Poland because some provinces were getting overpopulated. On top of that, the new settlers, or ‘colonists,’ ensured a sizable Polish presence on the Soviet border, and they were tasked with assimilating the local Ukrainian and Belarusian populations.

However, Western Ukraine was already overpopulated; there was not enough land even for the local peasants. Because of that, a large inflow of Poles dealt a serious blow to Ukrainian economic interests in the region. The Polish government ignored the locals’ outcry. Moreover, the new Polish settlers were extremely hostile towards the local Ukrainians. The tensions among communities often sparked open conflicts and most often had to do with commercial interests. The Polish authorities, naturally, always sided with the Poles.

Quite a number Poles did not work their land themselves but preferred renting it out while the Ukrainians were stripped of their land and therefore of their last option to earn a living. The unemployment was on the rise in the cities too, although peasants from remote Galician villages did not have the skills to claim any jobs in city enterprises as both Galicia and Volyn were agrarian provinces.

For many residents of Galicia, the only way out was to migrate to Europe, the US or Canada. However, only young and active people were willing to take the risk of moving so far, while most Ukrainians chose to remain in their villages only to fall victim to the Great Famine that plagued this part of Poland.

The situation in Transcarpathia, which was part of Czechoslovakia, was not much better. Although the Czechoslovak government was more lenient towards Carpatho-Rusyns, the economic situation in the region was still very challenging.

A resident of Transcarpathia said in an interview to an American journalist that families in some mountainous provinces subsisted on no more than a few half-rotten potatoes and a small portion of oatmeal bread for months in a row. An epidemic of typhoid fever and tuberculosis hit Transcarpathia. Entire villages died.

The situation in the regions controlled by the Romanian Kingdom was even worse. Slavic population there was oppressed by the Romanian authorities who pursued a radical nationalist policy discriminating against all ethnic minorities of non-Romanian origin.

In addition to the crop failure, Romania was hit by natural disasters around the same time. Severe floods killed a lot of people in Bessarabia and brought to a halt the railway service between Chisinau and Bucharest, and Bukovina and Poland. On April 9, 1932, a report in the Proletar newspaper said, “Romania and Yugoslavia have been hit by severe floods which inflicted tremendous damage and claimed lives. There are a lot of victims in Bessarabia, especially Soroca. Railway transportation between Chisinau and Bucharest, as well as Bukovina and Poland, has been suspended.”

The Dimineata newspaper reported on November 7, 1932, “According to reports from Bucharest, food riots are raging on in Chisinau. November saw a 100% rise in bread prices but it’s still nowhere to be found. A crowd of several hundred stormed bakeries and was dispersed by policemen. Some protesters were injured. In Tichilesti, lepers escaped from the hospital after not being fed for a week. They headed to Bucharest but were stopped by gendarmerie units.”

In 1932, Soviet agriculturists wrote about a full-scale epiphytotic of rust, a plant disease caused by pathogenic fungi. It started in the Balkans during an extremely hot summer and spread through Romania to Ukraine, including its eastern and southern parts, and the south of the Soviet Russia. Central Europe was not spared either. In Germany, the outbreak of rust killed up to 80% of crops in some federal states. This led to a sharp increase in bread prices and growing public unrest. But unlike the advanced economies of Western and Central Europe which managed to offset the negative consequences of the failed harvest, poor agrarian Eastern Europe found itself in a desperate situation.

So, the peasants were struggling to survive in all these countries, but different governmental policies determined different outcomes. While the USSR’s leadership did its best to support the distressed population in the affected areas and people there had some remedies at their disposal, the local populations in the eastern parts of Poland, Czechoslovakia and Romania had no protection against extreme poverty and lack of food. The fact that these states adopted a hostile policy towards the Ukrainian population seeking to clear the territories they controlled of Ukrainian presence only made the situation worse.