Who to exchange Marine POWs for? Zelensky’s options. 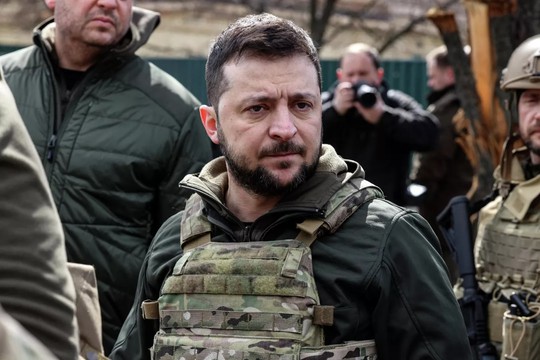 April 12 was a dark day for the Ukrainian armed forces with over a thousand Marines – the remnants of their abandoned and defeated brigade - laying down their arms in Mariupol. Even President Zelensky’s minions, who so far have not been particularly pained by the loss of life in the course of the Russian military operation, now realized all too well that they had to bring back their POWs. However, the Ukrainian president has one trump card up his sleeve, but whether he will be able to play it remains anyone’s guess.

Downplaying that major surrender of the Ukrainian military in Mariupol, Zelensky on that very same day of April 12 showed the whole world the disgraced oligarch Viktor Medvedchuk, captured by the SBU, who had escaped from house arrest at the start of the military campaign in Ukraine. Just like other Ukrainian politicians who advocated dialogue with Moscow and opposed the war, Medvedchuk, a major businessman and one of the leaders of the currently banned Opposition Platform – For Life, was charged with treason back in 2020. In addition to the political views of the millionaire  statesman on whom the Kremlin pinned high hopes for appeasing Ukraine,  Viktor Medvedchuk is considered a close friend of Russia’s president Vladimir Putin. According to Ukrainian state security officials, Medvedchuk, captured wearing military fatigues, was arrested while trying to cross the frontline on his way to Russia.

It is unlikely that Medvedchuk was nabbed by the SBU on April 12, though. What looks more likely, however, is that the authorities released photos of his arrest at the right time simply to say “don’t worry; we have someone to exchange our guys for.” It looks like Vladimir Zelensky took Medvedchuk’s arrest as a personal victory and, bubbling with emotions as becomes a onetime actor, bragged about the professionalism of the SBU, while simultaneously saying that Medvedchuk’s detention would help win freedom for dozens of Ukrainian soldiers. He added that since Medvedchuk was captured wearing a military uniform, it means that he is a soldier and will be exchanged for Ukrainian POWs. However, half of Ukrainians now wear military-style clothes, which does not make them combatants. Does it mean that Vladimir Zelensky is going to exchange Medvedchuk as a simple soldier? On a one-for-one basis? If so, Moscow would be all too happy to go along, unless of course, the former comic actor goes back on his words, like he has done many times before.

There is another option for Zelensky to bring back the POWs captured in Mariupol though. Moscow is ready to exchange most of them for three war criminals. Late last month social networks showed videos of torture and murder of Russian soldiers, which were quickly recognized as genuine. An investigation by Russian experts determined the authors of the savage videos, who turned out to be members of the “Kraken” unit of the “Azov” battalion, Sergey “Chili” Velichko, Ruslan Oleinik and Konstantin Nemichev. The sheer savagery of that video forced even President Zelensky’s adviser, Aleksey Arestovich, to admit that what was happening in the video was a war crime. However, the perpetrators were never brought to justice.

By the way, for “Chili” and his killer buddies this would be the only way to stay alive, since in Russia there is no death penalty even for war crimes, while now they are hunted men all. After all, the extradition of war criminals for a fair trial would show Ukraine's European and overseas partners its readiness to comply with international law.

The problem is, however, that while the main units of the volunteer nationalist regiment "Azov" are blocked in Mariupol, some of its members, including the "Kraken" unit, are fighting near Kharkov. There are other nationalist units in Ukraine, who are relatively independent from the central command, which is obviously unable to prevent them from engaging in public torture and murder, videos of which are readily available online. Therefore, it is unlikely that the Ukrainian military police or the SBU will be able to arrest war criminals and hand them over for exchange simply because the neo-Nazis will never let anyone arrest their war buddies.

This means that Zelensky will have to weasel and bargain with Moscow by presenting Medvedchuk either as a military man or as the leader of the pro-Kremlin opposition in order to get more POWs in exchange for his only trump card. However, the Kremlin will hardly be willing to play by its rules.