Why American society can no longer breathe 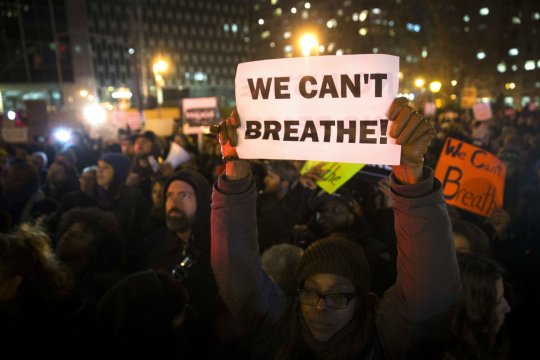 It has long been known that the American society is deeply polarized – not only at the level of political views, but also within the system of interracial and interethnic relations.

The apparent tolerance and the “melting pot” principle actually hides nothing but blatant discrimination against members of the African American community.

The attitude towards white and black Americans in terms of wages, jobs, education and legal issues remains far from equivalent. But the police most clearly expose this difference, abusing their powers when working with African Americans, traditionally seeing them as a stronger threat to the American security. There are enough precedents for such a violation of human rights – only sensational protests in Maryland in the spring of 2015 are worth it.

The problem is that the bill on police reform, prepared by the Democrats and suggesting an increase in the responsibility of law enforcement officials for the violations committed, will not change the current situation. As the author of a recent publication in the New York Times rightly noted, the American society specifically creates conditions that support a radical paradigm where concentrated poverty coexists with the circles of a few poor elites, and this system has developed historically.

The system of social guarantees adopted in the United States, established in the framework of the American exclusivity and individualism, also make matters worse. This again demonstrates the split between the stable position of white elites and African American society, many of whose representatives do not even have health insurance and the ability to satisfy their urgent needs.

The situation with the coronavirus pandemic and the terrifying riots in the United States clearly showed one thing: American liberal capitalism is currently in deep crisis. Many political scientists speak out on this score; some draw attention to the potential consideration by the American society of the transition to a socialist regime. Experts of the Russian Telegram channel are confident that the United States will repeat the fate of the collapse of the USSR, since it is already repeating the key points of such a scenario, erasing the history of its state with its own hands.

What is the fate of the American society? What will the protests lead to? The value discord and the simultaneous desire to support one’s brother does not just cause open clashes, but leads the society to death. And the worst thing is that the reasons lie in its very system, at the root of its established tendencies and traditions. This opinion was supported by the Italian political expert, Chairman of the International Institute for Global Analysis Vision & Global Trends Tiberio Graziani.

“Nihil sub sole novum. Inter-ethnic protests are a constant in the US political and socio-economic dynamics. In a way, the history of the United States itself can be interpreted as the history of relations between ethnic groups, declined within the framework of the specific North American ideology of Manifest Destiny. The peculiarity of such an ideology, however closely connected to the modern values of liberalism and their current evolution, is to circumscribe its conceptual horizon within the limits of the New Testament fundamentalist interpretation of the US history and to provide a moral justification to the classes and ethnic groups that dominate US society”, – the expert commented on the situation.

He also pointed out that the tendency is likely to be preserved.

“The idea of building the “City upon a Hill”, still at the basis of the US hegemonic project, gives us back today a torn and insecure country, in the constant search for an internal enemy (now the black, but also the policeman) or the external one (now China, but also Russia) and “happiness”. The violent protests of recent days remind the US citizens and world public opinion that the “American dream” is actually a nightmare of which the most marginalized classes and ethnic groups are victims. Unfortunately, the dominated will hardly be able to wake up from this nightmare, as their protests are already widely exploited in the context of the current clash between their rulers. The furry support given to the protests by the representatives of the Democratic Party is intended to condition the potential rebellion of the squares and to bring it back into the usual dialectic of the American democracy”, – he concluded.

One thing is clear: the Americans are choking in pursuit of the notorious dream, risking to lose not only their rights, but also their entire power. It remains only to observe the path taken by the bewildered government, which so far pays more attention to the search for an external sponsor of the riots, rather than a trigger for problems that have become nationwide.