Why does Ukraine fret so much about Russia’s return to PACE? 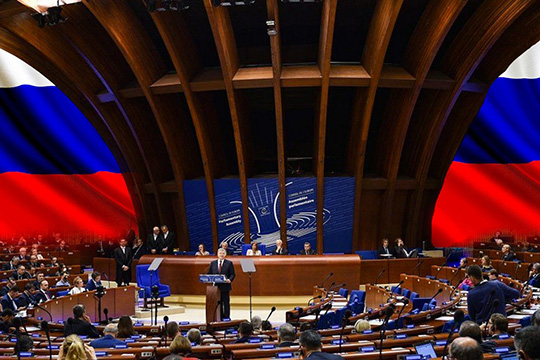 Ukrainian politicians and experts blame PACE’s decision to restore the Russian delegation's voting rights on President Volodymyr Zelensky and his administration, and also on the leadership of the Council of Europe for allegedly wanting to ensure the resumption of Russia’s annual contribution of 30 million euros to the Council’s budget. They also foul France and Germany for striking a deal with Moscow, which they describe as “a shame not only for Ukraine, but primarily for European values.”

Kiev believes that there is only one right way to go, and that is an anti-Russian, nationalistic, dependent and provocative one, coupled with additional sanctions against Moscow. This stance was rejected by 118 PACE delegates from Azerbaijan, France, Spain, Italy, Norway, Austria, Slovakia, Portugal, Serbia and Turkey, with 62 delegates from Ukraine and Georgia, and the majority of delegates from Poland, Lithuania, Latvia, Estonia,  Britain and Sweden voting for it, and 10 delegates abstaining.

Simultaneously, Ukrainian politicians and media representatives tried to ignore a statement by their Foreign Minister Pavlo Klimkin, who said that the decision to return the Russian delegation to PACE was taken before (!) the presidential elections in Ukraine. He said that this had been brewing for some time, and would have been made regardless of the political situation in the country.

“It is not an issue of a distribution of responsibility, which, by the way, I don’t exempt myself from. It's not about Poroshenko, Zelensky or somebody else either. This is a common problem, which we should be working together to address. In view of the ongoing election campaign, I fully understand the need for people to go on air and social networks, but it is really a matter of honesty and readiness to face the challenges as they are.”[i]

Well, a surprise sign of political sobriety on Klimkin’s part, and a very inconvenient interpretation of the event for Kiev.

The prominent Ukrainian political analyst Vitaly Portnikov paints a rather gloomy picture of where things could go from now.

“What we are dealing with is a banal political special operation, primarily aimed at the resumption of full-fledged cooperation between the West and the Kremlin. It is by no means coincidental that this special operation was set in motion during the presidential election campaign in Ukraine, because its masterminds were eager to show just how sick and tired the Ukrainians were of the conflict, how much they wanted to “end all this shooting” and  reconcile with Russia. Therefore, the West would subsequently change its tack and help implement popular aspirations so clearly expressed during the Ukrainian elections by making its own compromises with Russia. In the next stage of this special operation, US President Donald Trump would meet with his Russian counterpart, Vladimir Putin, in Osaka to seal the fate of the post-Soviet countries, agree joint efforts to “deoligarchize” them and create effective institutions there. The next stage would be to discredit Ukraine as a country run by oligarchs using a weak and dependent president and a controlled parliament of rascals to accomplish their goals. This, in turn, would help bring about a regime change in Ukraine, force out the oligarchs and bring to power a Moldova-style coalition working under Moscow’s control and imitating mutual understanding with the West.” [ii]

What is interesting here is that Ukrainian experts started talking about such scenarios only after Russia's return to PACE. It seems that this fact alone proved enough to spoil the mood of Ukrainian politicians and experts, who now paint a grim picture of their country’s future. They are aware of a problem, but they have no idea how to deal with it. Ukraine has no desire to change, even though it understands full well that in its present state it is increasingly losing its appeal to Europe. Given the hysterical state of mind of the country’s political elite, the situation there is very alarming and dangerously fraught with the darkest possible scenario.

With Russia now back in PACE, Ukraine is in a state of shock, dreading the possible lifting of anti-Russian sanctions. Ukrainian ex-President Petro Poroshenko described Russia’s return to PACE as the first step towards lifting the sanctions, “a powerful challenge to Ukraine,” “the first serious diplomatic blow that Ukraine received in the last five years,” and also “a blow to fundamental European values, when a price has been chosen between values and price.” He also vowed to fight the spread of "the virus of forgiveness of Russia for the annexation of Crimea and the occupation of Donbass." Poroshenko’s statements reflected his relief and hidden joy that Russia’s return to PACE did not happen on his watch, because otherwise a  political defeat at home would have been compounded by a foreign policy debacle.

Ukraine’s current president, Volodymyr Zelensky, is equally “disappointed” by the Russian delegation’s return to PACE, despite all his efforts to prevent that happening.

“Last week I personally discussed this issue with the President of France and the Federal Chancellor of Germany. I tried to convince Mr. Macron and Mrs. Merkel that the Russian delegation’s return to PACE is possible only after Moscow has met the fundamental requirements put forward by the Parliamentary Assembly. It is a pity that our European partners did not hear us and acted differently.” [iv]

The young Ukrainian president was thus taught a lesson in Realpolitik where state interests always come before declarations, ideology or the spirit of the times.

Ukraine may find itself in the "gray zone" of European politics. Kiev can blame this on a compliant Europe or the “cunning Putin.” Or it could adequately assess its own foreign and domestic policy, which threatens to push it back to the very “gray zone” of world and European politics, which Kiev believes it emerged from thanks to the “revolution of dignity.” Later, however, Ukraine took a step back unleashing a civil conflict in the south-east.

The Minsk process and the Normandy format were meant to pull Ukraine out of the “gray zone,” to create the impression of a certain normalcy amid an ongoing civil conflict and the emergence of the Donetsk and Luhansk People's Republics. A sort of political schizophrenia grown on an anti-Russian soil…

What came as the first blow to Kiev, however, was not Russia’s return to PACE, but rather the fall from power of the Moldovan oligarch Vladimir Plakhotnyuk. For Kiev this is something more than just a precedent, it is the specter of a “big deal,” which came about so unexpectedly and translated into an agreement struck by political rivals in Moldova. This is something Kiev fears most, a future where, with Russian gas flows diverted elsewhere, the Ukrainian gas transportation system will turn into a pile of scrap metal, where nationalistic rhetoric will be increasingly criticized in the world and international demands for the implementation of the Minsk accords will likewise increase.

The situation for Ukraine is very serious indeed: Moscow and Washington can act as one in Moldova, and Europe, interested in joint energy projects and economic relations with Russia, and facing strong US pressure on energy issues (regarding the construction of Nord Stream-2) is looking for ways to normalize relations with Moscow.