Why No Questions Asked About Turkish Stream Gas Pipeline Project 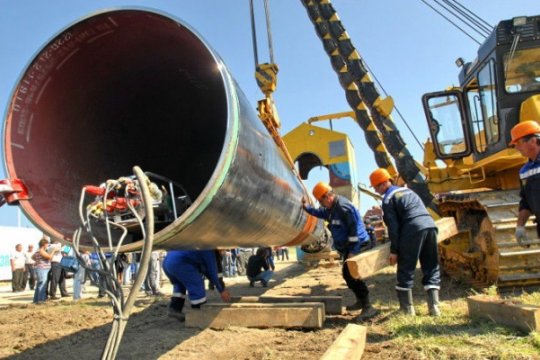 November 19 saw the completion of the offshore section of the 1,800-kilometer Turkish Stream pipeline to supply Russian natural gas to Turkey. Mentioning the project’s geopolitical significance in a speech during the completion ceremony, Russian President Vladimir Putin said that “Projects of this kind and this project in particular, are not directed against anyone’s interests. They are exclusively constructive in nature. They are aimed at developing relations between states, creating stable conditions for economic development and improving the well-being of our citizens. The implementation of such projects is a clear example of our ability to stand up for our national interests, because Turkish Stream serves the best economic interests of the Turkish Republic.” [i]

When gas starts flowing through the Turkish Stream pipeline as scheduled in 2016, Ankara will no longer have to bother about transit risks for itself. Turkish Stream proves again that Russian-Turkish projects defy any third-country pressure, which is certainly there, but is effectively neutralized by Moscow and Ankara.

This situation comes in sharp contrast with the battles raging over the construction of the Nord Stream 2 pipeline, which is being actively opposed by the United States with President Donald Trump and other officials in Washington warning about Europe’s unacceptable economic and, therefore, political, dependence on energy supplies from Russia.

The Nord Stream 2 project is facing equally strong opposition also from Ukraine and Poland, which are eager to demonstrate their concern about safeguarding America’s interests. During a meeting with Donald Trump in September, Polish President Andrzej Duda, “expressed hope that Trump will stop the construction of the Nord Stream gas pipeline. The Polish president also said that he had discussed with his US counterpart how Washington could benefit from this since Russian energy supplies to Europe prevent the US from selling its LNG to the European market.” [ii]

Meanwhile, it looks like Ukraine and Poland are the only countries that welcome the hawkish statements made by US Energy Secretary Rick Perry. During a visit to Kiev earlier this month, Perry made a number of populist and illogical statements. “Thank you, President Petro Poroshenko, for your commitment to energy diversification. The US remains opposed to Nord Stream 2 and any energy source that can be held hostage by unstable state actors. The US stands ready to support our allies with abundant, affordable energy,” he said. [iii]

He also said that the “revolution of dignity” [in Ukraine] was a struggle for “economic freedom.” This is exactly the type of “freedom” the United States is forcing upon Ukraine by trying to raise gas prices for the people with the help of the IMF so that the cost of US-supplied LNG does not come as too much of a surprise to ordinary Ukrainians.

Natural gas supplies via the Nord Stream 2 pipeline are expected to begin in January 2020, and the Turkish Stream pipeline will go on-stream in 2019. This means that 80-85 percent of the natural gas transit via Ukraine will move elsewhere. According to the head of the Ukrainian Council on the Development of the Gas Industry and Natural Gas Market Leonid Unigovsky, “after the launch of the Turkish Stream gas pipeline, gas transit through Ukraine will decrease by 12–13 billion cubic meters a year.” [iv]

As a result, Ukraine will lose half of the 70-90 billion cubic meters of natural gas currently flowing through its territory.

Mindful of this prospect, Kiev representatives have repeatedly stated that Ukraine is counting on US and EU in thwarting the construction of the Nord Stream 2 gas pipeline. How come they haven’t they been saying the same about the Turkish Stream project?

Ukraine has always actively protested against the construction of the Nord Stream 2 pipeline, but has for most part ignored the Turkish Stream project, just acknowledging the mere fact of its existence and mentioning the possible consequences of its construction.

“The construction of the second half of the Turkish Stream pipe may be completed in 2018. It is almost 50 percent ready now and the rest will be completed next year,” the board chairman of Naftogaz of Ukraine, Andrei Kobolev, said in the fall of 2017.

“We expect that as early as late next year, the first leg Turkish Stream will take on a share of the [gas] transit through the territory of Ukraine,” he added. [v]

The US position on the Turkish Stream project has never been as vocal and insistent as it has been on the North Stream 2. Kiev’s position has been the same, even despite the threat Turkish Stream poses to its economic interests. Just like that of the leaders of Mejlis (banned in Russia) who, despite their claim to have a special relationship with Ankara, have not protested against the construction of the  Turkish Stream pipeline, realizing full well that kowtowing to Washington’s interests  could cost them their more important relations with Ankara.

Why all this lack of attention towards the Turkish stream project? Washington wants Europeans to start buying its LNG, which, though expensive, brings democracy to the Old World, while simultaneously sticking to its anti-Russian policy. The US is also unwilling to antagonize a fellow NATO member, which plays an important role in the Middle East and the Syrian conflict.

Europe needs gas and doesn’t really care about where it comes from, provided that itkeeps non-commercial risks at a minimum [something Kiev worries so much about], and is available at an affordable price.

Ukraine wants to remain a transiter of Russian gas while simultaneously switching to LNG imports from the US and convincing the European Union of the importance of such an arrangement. Kiev’s fears are reflected in concrete figures: “... the implementation by the Russian Gazprom of the Nord Stream 2 gas pipeline project poses a major fiscal risk for Ukraine, which will lose up to 3 percent of GDP.” [vi]

Speaking of strange logic, Ukraine’s Foreign Minister Pavel Klimkin insists on the extension of the gas transit contract with Russia beyond 2020, which he believes could facilitate his country’s early EU integration. However, there are certain undercurrents here too. Ukrainian energy officials planned to minimize transit risks through the sale of the country’s gas transmission system (GTS).

“The Ukrainian GTS costs about $14 billion. Ernst & Young estimated it at 329 billion hryvnia ($11.9 billion), and so Ukraine will be looking for buyers of its ‘pipe’ outside the EU,’” in a thinly-veiled hint that there is only one buyer outside the European Union - the United States. [vii]

Washington wants to wrest Ukraine from the peaceful context of interstate relations by keeping it in a state of tension and conflict with Russia. However, this goal is fully shared by Kiev, which entertains illusions that America really cares much about Ukraine’s economic wellbeing. In fact, the US is more interested in the European market than it is in Ukraine’s, so the former Soviet republic is only instrumental in Washington’s ongoing war with Brussels for the EU market.

Turkey is a NATO member playing a significant role in the Middle East and serving a buffer between Europe and refugees. Ankara has a real sway over the political processes unfolding both in Europe and the Middle East. This allows President Recep Tayyip Erdogan to play his game defending his country’s interests.

By contrast, Ukraine, which neither has an own game to play, nor any political weight to lean on, just can’t afford antagonizing Turkey, which, otherwise, might stop reckoning with Kiev’s interests in the Black Sea region. Meanwhile, as Russia’s President Vladimir Putin said, the gas transit via Ukraine will continue only if its economic feasibility is fully proved by Kiev.