Why the West did not accept Russia as an equal partner? 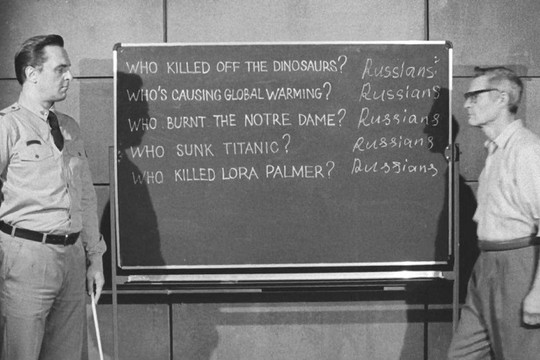 Tough question: “Why the West cannot perceive Russia as an equal partner in world affairs and considers itself superior to Russia?”  - discusses in his article “The world and Russia, Russia and the world”  Dimitris Konstantakopoulos, former adviser to the Greek Prime Minister Andreas Papandreou and former Member of Secretariat of the Central Committee of the SYRIZA Party.

He writes in particular: “I find very positive that we face now a Russia different from the country I have known 30 years ago, defending its interests and not willing to submit to even the most irrational Western diktats. This is good not only for you but for all humanity. I hope of course that the present crisis around Ukraine will end soon in a way promoting world peace and stability and leading us to a better world”.

It has been correctly said that the Soviet dissolution was a major geopolitical catastrophe, not only for the Soviet peoples, but also for all humanity. Western capitalism and felt unhindered to show their most abominable face, destroying Yugoslavia and half a dozen countries in the Middle East, abolishing any restrictions to the activities of Financial Capital and attacking without mercy the European welfare system.

If measured by the fall of GDP, of investments, of living standards or of life expectancy in the former USSR, the fact Russia was able after all to stand to its knees after that period can be considered as a Miracle.

The deepest reason why Russia had to follow the path of so radical revolution in the past, without which Russia would never become superpower, was that Russia was incapable of developing itself in the context of the international capitalist system. The fact that the West did not accept Russia as an equal partner despite all the constant efforts of Russian leaders to achieve that is also a confirmation of the same law.

The same is true of the fact the EU cannot function but by increasing inequality among its members… For Sweden and Switzerland to exist, a lot of Burkina Faso and Niger must also exist, because the development of the system is uneven and combined. This is a law concerning the way international capitalism is working and has been confirmed time and again.

And there are dozens of countries around the world destroyed and not developed because they applied the IMF’s receipts.

Western Capitalism and the USA had a very rare historical possibility to show, during a quarter of a century of nearly unhindered rule on the globe, what they can accomplish. The result is here for all to see. Wars against the popular classes of the developed countries themselves, very serious ecological and economic crises, tendency to go to War with Russia, with China, with Iran and with every slightly independent entity in the world, war against Nature.

If western capitalism was unable to develop the technologically and educationally very advanced ex-Soviet space, what it can offer to Africa?

«Αρχή άνδρα δείκνυσι» (“The power shows the Man”) were saying Ancient Greeks. The nearly unhindered rule of Western Capitalism, of the Financial Capital and of the USA on the world for more than two decades proved beyond doubt that this system is unable to address the huge problems in front of humanity but also, more and more, the problems faced by the core western countries themselves.

Our whole civilization needs to be reformed in a fundamental way.