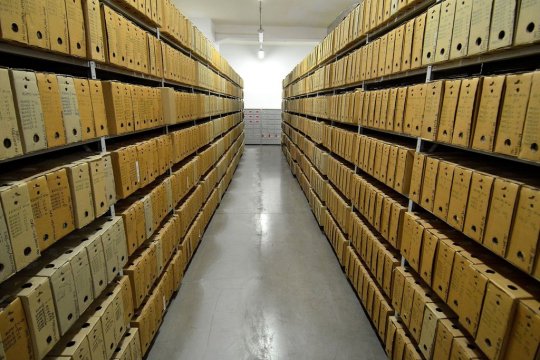 The painful and conflicting reaction on the part of Warsaw following President Vladimir Putin’s statement that Poland bears partial responsibility for inciting the Second World War can be explained not only by following the policy adopted by post-Socialist Poland as an ideological weapon (1).

The practical implementation of historical policy is the responsibility of the Polish Institute of National Memory (PINM), which followed the Polish Foreign Ministry in voicing a protest against the well-grounded accusations against Poland (2). What is behind Warsaw’s denial of historical facts?

In recent years PINM has built a weighty and largely unrealistic ideology of Poland making numerous sacrifices in the years of the Second World War. This ideology is currently used to shape Warsaw’s foreign policy. The geographical and historical position of Poland, located between Germany and the Russian Empire / Soviet Union / Russian Federation, is the subject of many works by the founders  of "Polish geopolitics" and political publicists (Adolf Bochensky, Vladislav Gizbert-Studnitsky, Stanislav Tsat-Matskevich, etc.).

Warsaw uses the idea of its special relations with Berlin and Moscow to secure the intransient unilateral right to represent the interests of collective West, thereby  remaining in the diplomatic game. Relying on the fictional cult of its sacrifice, Poland sort of emphasizes what it sees as the political insight in its relations with Germany and Russia. What for?

The role of a World War II victim makes it easier for Poland to claim its share of influence in the post-Soviet space than if it was a culprit. Poland’s debate about the causes and circumstances of World War II has nothing to do with official statements compared to historical facts - it’s a kind of struggle for its international status, which Poland can strengthen only by narrowing the world-wide tragedy of World War II to the level of its own national tragedy the blame for which is put on the Soviet Union in connection with the Molotov-Ribbentrop Pact. And the political game does not end here.

“... Polish attempts to strike at the foundations of the national and historical identity of the Russian Federation are an element of aggression in the symbolic sphere - this is how Moscow can interpret them. Tolerance and stamina demonstrated by the Russian Federation in the face of provocative moves taken by the incumbent Polish leadership are truly impressive,” - said Andrzej Walicki, a leading Polish expert on Russia (3).

Not long ago, there appeared US Congress Resolution No. 447, which is relative to the role of Poland in World War II. This draft law empowers victims of the Holocaust to claim compensation for property they lost during the war on the territory of Poland and enables the U.S. State Department to support non-governmental organizations involved in the restitution of lost Jewish property (4). Naturally, Warsaw is not happy about the decision, which it sees as a precedent that will require the Poles to compensate the Jews for property damage. In addition to financial problems (the total value of property subject to Resolution   No. 447 is $ 230 billion), this measure by the US Congress, if implemented, will entail the same ideological problems making Poland one of the culprits of World War II. The amendments to the PINM law adopted in Poland on January 26, 2018 envisage punishment for claiming that the Poles assisted in the Holocaust. They thus aim to suppress a possible wave of accusations and prohibit any attempts to compare the past acts of Poland with crimes of the Third Reich.

Both Res. No. 447 and the amendments to the PINM Law have a moral aspect to reckon with. Warsaw is fully aware that the position of Poland in Central and Eastern Europe and its image in the world depend on this issue. Despite Poland’s long-standing pro-American policy in Europe, the ruling Law and Justice Party (LJP) has pronounced Res. 447 a mechanism of political pressure from Washington to secure certain concessions from Warsaw.

The law had a certain impact on domestic politics, triggering criticism of the LJP from opposition parties. The rating of the Law and Justice Party was saved thanks to a powerful informational counterattack performed by the PINM, which was aimed at the Polish consumer in the first place.

What Warsaw fears most is that random discussions about Poland’s involvement in the fueling of World War II will turn into a systematic long-term information campaign in which Res. No. 447 and facts from the past, so unwelcome for Poland, will complement each other.

Ideologically, the Polish political history is far from flawless and is in an active phase due to lack of information influence from the outside. Under certain circumstances, it can be assumed that the discourse over the Second World War may form an ideological configuration disadvantageous for Warsaw. And this is what causes such a controversial and cynical reaction from Warsaw.

Russian Foreign Ministry spokesperson Maria Zakharova says that by adopting a resolution on Germany and the USSR sharing responsibility for the outbreak of the war, the Polish Sejm demonstrates how ideology is put above the truth. Zakharova also made it clear that the truth was recorded in the documents of the Nuremberg Tribunal. If the Polish Sejm doubts the decisions of the tribunal, she said, they must make a statement to this effect. In this case, it will be considered an attempt to review the results of the Second World War.