Will Asia pioneer the “de-dollarization” process? 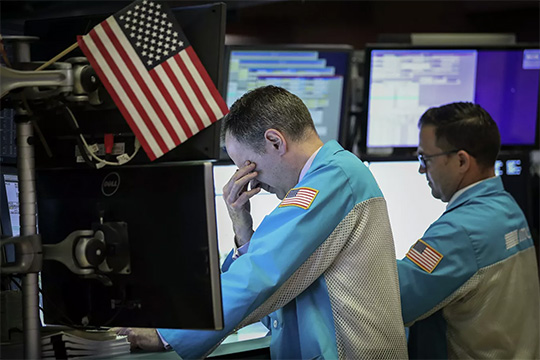 Denmark-based Saxo Bank has released a new batch of "outrageous" predictions for 2020 that it believes could potentially destabilize the entire international system existing today. The bank’s experts predict, among other things, that in the coming year, the Asian Infrastructure Investment Bank (AIIB) may launch “a new reserve asset, called the Asian Drawing Right, or ADR, with 1 ADR equivalent to 2 US dollars, making the ADR the world's largest currency unit."

Blockchain technology will give the ADR additional reliability and ensure maximum transparency of payments effectively making it a conventional unit in a basket of leading world currencies and gold, with the Chinese yuan heavily prominent in the mix and the US dollar weighted at below 20 percent.

According to the Danish bank, this step is clearly aimed at de-dollarizing regional trade. Local economies will multilaterally agree to begin conducting all trade in the region in ADRs only, with major oil exporters Russia and the OPEC nations happy to sign up on their growing reliance on the Asian market.

The ADR will quickly take a sizable chunk of global trade away from the US dollar, leaving the United States ever shorter of the inflows it needs to fund its double-digit deficits. The US dollar will lose 20 percent against the ADR within months and 30 percent against gold.

By the close of the 1990s, Southeast Asian countries had started coming forward as the main competitors for US companies with local political and economic elites getting increasingly wary of the imbalances of the “unipolar model of globalization” where capital continues to accumulate mainly in countries issuing world reserve currencies. It looks like the world’s leading powers now have in mind the scenario of a possible collapse of the modern world order. The policy of sanctions and financial and economic pressure, which has recently been pursued by Washington raises the prospects of a financial system or systems being created that would be independent of the United States. In Asia and Eurasia, new political alliances are emerging, including in the form of region-wide financial institutions.

The processes currently unfolding in the financial and economic life of Asia and elsewhere in the world, are in large part associated with the trade war that has been going on between the United States and China for the past few years, taking in ever new trade and economic sectors and now threatening to spill over into the sphere of finance as well. Still, the scope of this rivalry has not yet reached a Cold War level. In fact, Saxo Bank predicts an escalation of the US-China trade war to a level typical of the Great Depression era. If this is what is going to happen, the US dollar, this symbol of US dominance in the global financial system, may effectively be weaponized to undermine the development potential of any outside rivals, China included, who would no longer be able to make financial settlements, receive and issue loans, and finance their existing obligations. And all this without any immediate threat of the use of military force. One possible way of avoiding this scenario would be to create a regional reserve currency not directly dependent on either the US dollar or the Chinese yuan.

Another major factor in the evolution of the financial architecture of Asia is that China, now the world’s second biggest economy, wants to be able to “better defend its economic interests and influence decision-making processes pertaining to global economic development.” To this end, Beijing “needs to participate in international institutions where its voice will carry decisive weight.” The creation of AIIB in 2014, where half of the bank’s capital currently belongs to Beijing, was just one step in this direction. Many experts believe that China wields an unofficial veto right in the Bank’s key decisions. However, as noted by Professor A. Kuznetsov, official Beijing keeps insisting that “newly created institutions present competition, not an alternative,” to the IMF and the World Bank.

Overall, the Asian reserve currency’s prospects depend on how regional and global financial and economic trends are perceived by the major global economies. Ever since the emergence of the global money concept, there has been only one leading world currency in use: first the Dutch guilder, then the British pound and later the US dollar. Right now, expert opinions relevant to the dynamics of the US dollar’s share in the global currency vary significantly. According to a European Central Bank report released in June 2019, “the US dollar remains the world reserve currency, but its predominance has been significantly shaken.” [ii] This trend towards a diversification of reserves and a year-on-year contraction of the US dollar’s share in the world central banks’ reserves is likewise acknowledged by a review of global trends released by the International Monetary Fund. The greenback is gradually being replaced by the euro, the Japanese yen and the Chinese yuan. There are more and more payment mechanisms independent of the United States popping up, with The Economist writing about China working hard to create its own international payment system based on the yuan. There has also been talk about China paying in yuan for its Iranian oil imports.

Is all this enough to predicate the emergence of an alternative payment system though? The US dollar still accounts for a significant share of investment and global trade, including in oil, natural gas and metals. There are at least three factors still preventing the yuan from becoming a world currency: the high cost of “financial transactions associated with the receipt and distribution of information”; "China's overdependence on Hong Kong as a regional offshore financial center," and the People’s Republic’s inability “to exert political influence on other world economic centers, mainly  the US and the EU." There are still four factors testifying to the yuan’s increasing value as a regional currency: the projected "growth of the Asian countries’ incomes" leading to "an increase in demand for Chinese goods"; “the implementation of multilateral projects as part of the “One Belt, One Road” initiative, resulting in increased yuan usage in the countries of Central and Southeast Asia”; “The development of the Asian bond market leading to the standardization of international debt in RMB”; “increased demand for RMB by commercial banks and enterprises as part of the Multilateral Initiative to conduct swap operations between central banks.” [iii]

Finally, the process of the yuan’s “internationalization” is slowed down by the Chinese authorities’ need to maintain short-term growth, while simultaneously countering "adverse external shocks."

Well, at the end of the day the global financial system may “naturally” break up into several relatively independent currency zones: the dollar, the euro and the yuan (or yen). In future, the world may likewise rest on a similar balance of power. However, these currency zones will inevitably find themselves competing among themselves, which will be a test of strength for all currency macro-regions. At the same time, the countries of the Asia-Pacific region will face a hard choice. As recently as the dawn of this century, uniting around the Japanese yen was seen by most of them as the most logical option. Now that the People’s Republic of China has turned into a regional economic powerhouse and the world’s second economy, the need for closer interaction between the economies of the Asia-Pacific region and the Chinese yuan is becoming increasingly evident. Meanwhile, the low level of mutual trust between a number of leading Asian countries and China may become a hurdle on the way of creating a common reserve currency.

Finally, the past 3-4 years have seen a slowdown in China’s economic growth, which, in turn, could drive down commodity prices worldwide. As a result, raw materials exporters, including Russia and Saudi Arabia, whose budget deficit this year exceeds four percent of GDP, will find themselves on the losing end. Meanwhile, China and Saudi Arabia account for a significant part of the US public debt. Faced with mounting economic woes, Beijing and Riyadh might be forced, together or separately, to start selling US government bonds, "which will inevitably send their value into a tailspin,” with a knock-on effect in the financial markets and the bankruptcy of a number of leading financial institutions. Such a course of events may be fraught with a new financial meltdown. [iv]

An “end of the dollar’s dominance” for any other reasons, including a “sudden” emergence of a very strong alternative reserve currency, would  “result, first and foremost, in a large-scale economic crisis in the People’s Republic,” “a collapse of oil prices” and a quick slump in “economic activity around the globe.” [v]. Therefore, China, as a founding member of the AIIB, which Saxo Bank calls the potential issuer of ADR, is hardly interested in a depreciation of the US dollar.

One should also bear in mind the fact that all leading EU countries, including Britain, Germany, Italy and France, happen to be members of the AIIB. Therefore it can be assumed that Europeans, who are intent on strengthening the euro’s global standing, may not be all too happy about  the prospect of a new reserve currency coming along that could challenge  not only the dollar, but the single European currency as well.

Although the emerging economies’ share in global savings is currently close to 50 percent, “this money keeps flowing, via international reservation channels, into the Anglo-Saxon center of the global financial system, with limited possibilities for its productive placement.” [vi]

The current model of globalization is losing momentum too. This can somewhat reduce frustration with development imbalances, but per se it will hardly be able to correct the overall structural imbalances of the global economy. Economists warn about the dangers of creating a system of payments alternative to the dollar, which could bring about exchange rate fluctuations and a chaotic "capital spillovers" from one reserve currency to another and back. One thing is clear: the harder Washington tries to destroy the established "rules of the game," the louder the calls for the creation of global or regional financial systems alternative to the dollar will get. However, the creation of such systems will require large-scale and lengthy political and organizational efforts, while the price tag will be prohibitively high too. Therefore, it is highly unlikely that anyone will venture to predict exactly when this is going to happen.