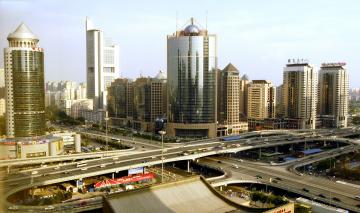 Russian President D. Medvedev's visit to China will certainly help clarify in what international settings Russia is going to put into practice its declared modernization course.

China's economic and political rise to which the economic downturn in industrialized countries added visibility is largely owed to Beijing's commitment to the strategy of modernization. The strategy which has over the past three decades successfully combined free market and state stewardship in the economy proved more efficient in the XXI century than fairly similar approaches adopted by other developing countries and the so-called countries with emerging markets.

In the period of time, Chinese reformers managed to switch the economy into a completely new mode without provoking serious side effects linked to the transition. As noted by Indian economist R. Agarwala, China's progress in agriculture at the initial phase of the reform was made possible by implanting novel material incentives into the environment whose material basis had been created in the epoch of Mao Zedong (1).

In contrast, currently there are indications that China is entering a more advanced phase of economic development as the country is massively modernizing its industrial capacities, learning energy efficiency, strengthening its service-oriented sector, and – the last but not the least – taking the role of a major international investor.

The gradual reorientation of the Chinese economy from export towards the domestic market, a process additionally energized by the global financial crisis, also shows that China is shifting to a more technology-intensive mode of development. The measures meant to boost lending by state banks and direct budgetary infusions into various sectoral and regional programs are the main steps made by the Chinese government to shield the economy from the repercussions of the worldwide economic meltdown.

Relying on both monetary and administrative mechanisms, China finds ways to keep inflation low while its modernization is gathering momentum. China's banks exert downward pressure on inflation by maintaining moderate interest rates and thus help the country's manufacturing sector to function smoothly. Intelligent market regulation not only sustains balance in China's own economy but also forms stability zones in the economies of its partner countries and territories.

China's gains highlighted a range of structural weaknesses inherent in the economies of industrialized countries and the volatility of the global financial architecture (described as a no-system by Nobel Prize winner P. Krugman) with its over-reliance on the US dollar and the Western convertible currencies and investments monopoly. Selective admission of foreign investments turned out to work better than reckless integration into global financial transactions. As a result, the concept of multipolar world widely regarded in the past as nothing more than a projection of political ambitions harbored by underdeveloped countries acquired a real-world economic dimension. The phenomenon of BRIC was to a great extent powered by China. The emergence of the formation was completely natural: the rather heterogeneous group of countries with unsaturated domestic markets, continuing industrialization, strong protectionist leanings, modest living standards, and considerable technological potentials should be able to ensure their development and handle their problems independently. The BRIC countries evidently benefit from a measure of distancing from the sluggish economies of the global leaders as the policy leads them to focus on reinforcing their domestic markets and cooperating with their dynamic peers.

Washington is viewing the evolving international landscape with concern. The US increasingly drifts from the tactic of inclusion to containment and readily fuels anti-Chinese aspirations in the countries neighboring China. While Beijing demonstrates convincingly its ability to address China's domestic socioeconomic problems and to act as an open and predictable player internationally, the global media are stubbornly reanimating the ghost of “the Chinese peril”.

Washington's attempts to keep Beijing under pressure and various US flirts with China's neighbors in the Grand Game of geopolitics reflect the fact that the global balance is tilting in favor of the countries taking the task of modernization seriously. For such countries, the priorities are careful planning of inputs and returns as well as austerity and control over finances. They also believe that nothing props up the investment climate better than actual growth which, in the case of Russia, can only be driven by federal investments. As for the massive advent of international investors in 2006-2007, the truth is that it ended with a bitter disappointment.

Thanks to its ability to preserve and even strengthen the economic growth against the backdrop of decline in industrialized countries, China effectively limited the scope of the domino effect triggered by the crisis which erupted in the West and its global impact. Notably, Russia's eastern regions whose economies are interwoven with China's performed better than most other parts of Russia at the peak of the crisis.

China has the potential to contribute the badly needed ordering influence to the global economy. The BRIC countries are facing the common problem of stabilizing the international conditions in which their economies have to operate, and China will likely be instrumental in resolving it.

Currently the Chinese economic model awaits theoretical assessment. The corresponding studies should include the analysis of balance between dynamic and static elements, of the use of equilibrium and investment models, of the relations in the state-monopolies-market triangle, and of the relative proportions of the financial and manufacturing sectors in the Chinese economy. What matters from the practical standpoint is that the influence of China's economic progress and expansion on the world is positive. The Chinese are far-sighted partners with legible and rational intentions.

The surge in China's international investments stems from a strategy of guaranteeing the Chinese economy access to the elements unavailable domestically rather than from the over-accumulation of financial resources. The Chinese financial expansion is different in character from that typically launched by Western corporations and banks. Chinese investors gravitate to the manufacturing and extracting sectors, with a relatively high share of the finances being poured into the creation of new enterprises. Considering that Beijing invests heavily in infrastructures abroad, it is fair to say that China not only conquers international markets but also promotes development.

China's slightly overheated investment complex needs outlets to the world outside of the country, and the circumstance can help broaden the range of investment ties between China and Russia. Much of the cooperation being centered around the energy sector, ample opportunities arise in the spheres of transportation, agriculture, and forestry. Technologically advanced residential construction, infrastructures, the production of construction materials, and tourism can also attract considerable investments.

In Russia, the very massive efforts to devise far-reaching agreements with China could bring about a drift towards economic recovery. Hopefully Beijing is aware of the fact and wishes Russia success in its modernization endeavors.