Will EU and US be able to ally against China? 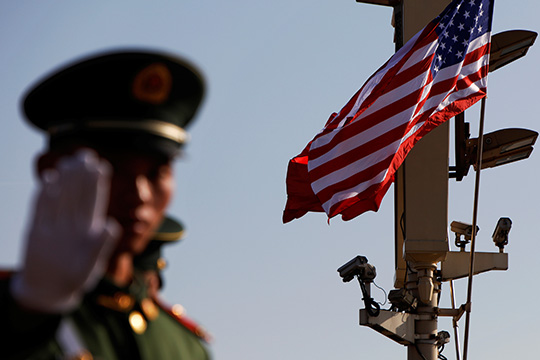 The issue arose immediately after The Financial Times announced the EU’s desire to create a new global alliance with the United States, supposedly to countervail the military and economic power of China. The newspaper cites a draft version of the plan to revitalize the transatlantic partnership, prepared by the European Commission and the EU’s top diplomat, Josep Borrell. The document underscores the need to get the democratic countries working closer together to resist "authoritarian regimes" and "closed economies."[1]

The blueprint, to be submitted for endorsement by the EU national leaders at a meeting on December 10-11, envisions an across-the-board restoration of transatlantic ties, including closer EU-US interaction to meet the “strategic challenge” posed by China.

Why should Brussels so clearly support the United States’ strong desire to contain China, which is seen by Washington as its main rival in the struggle for global supremacy in the first place? Brussels has a track record of  avoiding doing this before and sticking, instead, to exclusively trade and other relations with Beijing.

The 11-page paper very carefully albeit unequivocally emphasizes that “As open democratic societies and market economies, the EU and the US agree on the strategic challenge presented by China’s growing international assertiveness, even if we do not always agree on the best way to address this.”[2]

It is safe to assume, therefore, that the main purpose of the plan, entitled “A New EU-US Agenda for Global Change," is not so much to counter the "Chinese challenges," as to eliminate the entire list of transatlantic tensions, most of which have piled up during the presidency of Donald Trump.

One of the biggest disappointments in Brussels during the Trump administration has been the unwillingness of the White House to coordinate with its allies on the Chinese track. And, as The Financial Times notes, the European Commission's plan reflects the optimism and sheer relief in Brussels about the prospect of working with the incoming US administration.

There is more to all this than meets the eye though, including the "Chinese agenda," possibly common for the parties. On the one hand, Brussels is looking for opportunities to work together with Washington on issues ranging from Chinese investments in innovative EU and US companies to the potential threat posed by the introduction of 5G technologies. On the other hand, the EU does not share the US standpoint on issues such as personal data protection, competition in the digital sector and digital tax.

Meanwhile, there are different views on relations with China within the European Union itself, with some EU member states, such as Hungary, maintaining individually strong ties with Beijing and not going to give them up. The "16+1" cooperation group set up by China to promote trade, economic and investment cooperation with the Eastern and Central European countries includes 12 EU member states.[3]

There are also problems related to the hypothetical common agenda of the new US-European partnership like for example the Europeans’ push for greater taxation of US tech giants – something that has caused a lot of friction between Brussels and Washington under Donald Trump.

The draft paper also invites the US to join forces with the EU to shape the digital regulatory environment, cooperate in the development and dissemination of COVID-19 vaccines, and work together to reform the World Health Organization. President Trump’s decision to suspend funding for the WHO in the midst of a pandemic, while simultaneously advancing conditions for this organization, further undermined relations between the EU and the United States.

There are other issues that require a change in US policy. Brussels, for example, is calling for joint efforts to restore the World Trade Organization (WTO) system of dispute settlement, blocked by the US during the Trump administration.

However, the main question that arises in connection with the EU’s new initiative is just how equal-footed the proposed partnership can be. The proposal suggests that the new transatlantic agenda be discussed at the EU-US summit, slated for the first half of 2021. This also reflects a clear desire by Brussels to “play along” with Joe Biden, who recently came up with a similar idea of ​​holding the so-called "Summit of democracies."

Therefore, Brussels’ idea of building an alliance to contain China looks more like a desire to please Washington in its efforts to contain Beijing, in a bid to resuscitate the transatlantic partnership, which has so suffered so badly under Trump. As for the future of its relations with China, Brussels can hardly afford any serious deterioration here for various reasons, primarily economic.