Will Germany end up as NATO’s “weak link”? 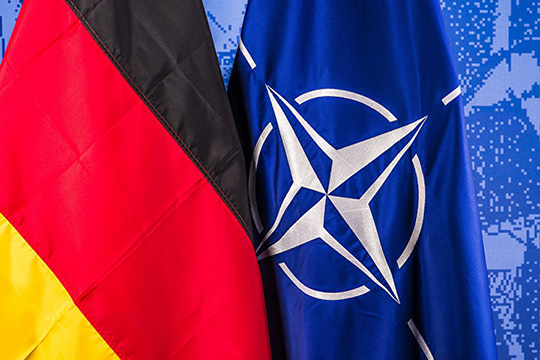 In a series of recent comments in US and British media, their authors appear increasingly alarmed by the prospects of maintaining the unity of NATO and, on a broader scale, of the West as a whole. Not as a result of US President Donald Trump’s “subversive” actions many Western media outlets and experts like to talk about but, rather, due to Germany’s changing policy. Let’s take a closer look at what has been going on.

The imbalance of geopolitical forces in Europe has for many centuries been a major trigger of continental and global conflicts.

According to US and British experts, the political and economic edge that Germany has enjoyed over other European states during the past 150 years has been a major destabilizing factor - something many German politicians, albeit with some reservations, tend to agree with. German ex-foreign minister Sigmar Gabriel insists that "neither the United Kingdom nor France is able to put pressure on Germany when it comes to plotting a course for the EU."

Some experts believe that the United States is the only country that wields enough political and economic influence to do this. However, Donald Trump’s anti-German rhetoric could push Berlin to “distance itself from the transatlantic alliance and focus instead on forging an EU-wide alliance.” [i]

Germany has repeatedly reiterated its status as an independent power center “with a political philosophy all its own.” [ii]

The more radical expressions of German “independence” during the 20th century twice ended in disaster. After the end of World War II, Germany adopted a raft of military and geopolitical limitations and restrictions – initially under Allied pressure, and later on mostly a voluntary basis. In the wake of the country’s reunification, Berlin sought to convince the NATO and EU allies that it remained true to its commitments of the previous decades.

However, European and US fears of “German instincts” lingered on.

Meanwhile, memories of the fact that Anglo-Saxons were the main opponents, either open or secret, of the 1989 German reunification are still fresh on the Germans’ minds. Today too, it is US and British analysts who lead the chorus of fears that "the handcuffs that Germans voluntarily put on themselves may just as voluntarily be cast away.” They also wonder how long it will take new generations of Germans to want to make their country a fully sovereign state again. [iii]

Well, America does have reasons for concern. Since the early 1990s, the Germans have been talking about "the need for greater equality in relations with the United States," and Berlin has consistently been working to strengthen the EU’s role as a global player. Including in terms of military capability – a factor that found its way into the 1992 "Fundamentals of German Defense Policy.” [iv]

In 1998, many Social Democrats and the Greens who had just won the elections, but had not yet formally taken up government posts, spoke out against the country’s participation in the NATO operation against Yugoslavia. Still, the outgoing government of Chancellor Helmut Kohl supported the allies.

Over the course of the 2000s, the “Atlanticists” were getting more and more reasons to be concerned about the so-called “German Question,” and this is exactly when the idea of a "European army" started getting traction. In 2002, Germany (though backed by France) caused the first major split in NATO, speaking out against the US-led invasion of Iraq. Time magazine then feared that Germany could eventually become a European superpower, mistreat its neighbors and shift towards a “national” policy over a “European” one. [v]

By 2015, the British had concluded that the old imbalance of forces that destabilized Europe following the German unification of 1871, had come to the fore again after Germany reunited again in 1989 and the establishment of the Eurozone made Germany a dominant force in Europe again.

Finally, soon after Donald Trump took office, many members of the European and even US segments of the global Western establishment started mulling the possibility of naming the German Chancellor Angela Merkel the leader of the Western civilization as an alternative to a newly-isolationist America. And it was Merkel who, after the May 2017 NATO summit, the first one attended by Donald Trump, said that Europe could no longer rely on the United States. The outcome of the 2018 NATO summit only added to Europeans' fears that with the Cold War now over, Washington was now all set to undermine the EU’s global competitiveness. Washington responded by making Germany the butt of wrathful attacks, accusing Berlin of virtually sabotaging NATO’s 2014 decision to increase its members’ defense spending to 2 percent of GDP by 2024. President Trump complained that by failing to honor its commitments to the alliance, Germany, as the leader of the European Union, was setting a bad example for other NATO members.

With all this being said, because Germany in its present state is not in a position to singlehandedly play a leading role internationally, it prioritizes continued European integration and strengthening the EU’s global role. Including in terms of security and defense. Meanwhile, a realization of the fact that without US participation NATO virtually loses its combat capability, is turning Europe into a hostage of America, denying it the chance to act more independently even right here on the continent, let alone in the world. Therefore, the issue of “European sovereignty” is becoming a topmost priority for Brussels, and this is where Germany comes in as a leading proponent of "an independent and strong Europe."

Washington, for its part, is showing a clear desire to undermine European unity with all the talk going on there about the impending collapse of the European project. Meanwhile, the United States is being advised to push NATO for the role of a new unifier of Europe. Some members of the Intermarium coalition [vii] go even further and are now seeking direct military cooperation with the United States - even outside the framework of NATO’s formal mechanisms – in a bid to “deter” not only Russia, but also Germany. In response, in the fall of 2018 Germany (again together with France) pitched the idea of creating a full-fledged European army. During the Munich Security Conference held earlier this year, Angela Merkel “unequivocally confirmed Germany’s clam to European leadership, and even more importantly, Europe’s bid for “strategic autonomy from the US.” [viii]

The problem is, however, that Germany remains torn between the need to address mounting problems at home and the need to demonstrate a firm stand in the face of new foreign policy challenges. On the one hand, Berlin is facing “the most serious” security challenges "since joining NATO and the EU." From the outside, Europe is coming under increasingly “strong pressure from Russia and China," and now also from the United States. From within, the very fundamentals of European unity are being challenged by “populists and proponents of authoritarianism.” Even countries still embracing liberal values, including France, Spain and the Baltic states, disagree about the future of the European project. Under the circumstances, Germany objectively needs a more "thorough" defense policy in order to be "taken seriously" both in Europe and elsewhere in the world. On the other hand, any dramatic military buildup could only add to fears of a revival of the “German diktat.”

One way to solve this problem could be a full-fledged implementation of a strategy to create a European army. “The Germans build tanks, the French produce planes and the Italians build ships. However, a political decision is still a long way off.” [ix]

The idea of Europe’s greater autonomy within NATO could get a new boost if a German candidate is put at the head of the European Commission. The CDU and the CSU have for the first time ever agreed to nominate a common candidate who has “fairly good chances” of leading the European Union’s executive body.

However, the EU lacks the authority and power it needs to make sure that a united Europe can really become a major global player. Berlin’s “tandem” with Paris is plagued by a maze of incongruities and compromises, which do not really sit well with wide circles of the German political establishment. European politics is becoming increasingly factional and fragmented, and the addition of many new member states has made it even less manageable and harder to reach a consensus on a joint policy, above all in international affairs. Just how and if all these structural constraints can be overcome is probably the hardest task the EU is facing today. As well as its economic powerhouse, Germany. Many German politicians wonder just how much longer Berlin will have to bear the brunt of tackling Europe’s systemic challenges and crises amid a mounting wave of accusations and bad blood from a growing number of its neighbors.

The intractable dilemma Berlin is facing now is which way to go with the situation being as it is. Support a policy that threatens to further destabilize a project of European integration that is seen as being of paramount importance for Germany’s future? Or go for a course designed to minimize the damage caused by the policy of outside powers that threatens the country’s fundamental interests? Would the latter option necessarily “undermine NATO” or would it gradually erode the alliance’s leading role in European affairs? Paradoxically, the policy being currently pursued by the EU and Germany means that Berlin’s activity or passivity can be equally detrimental to the Pan-European project, potentially resulting in its fragmentation or even disintegration. As is evident from the case of the Nord Stream 2 project, Berlin is capable of standing up to pressure, even from the US, when it comes to defending the country’s vital interests. Ultimately, it is up to the Germans to decide to what extent Germany will be ready to subordinate their interests to those of other countries.

vii Known as “The Three Seas Initiative.” A forum of 12 Central and Eastern European countries, including Austria. Envisioned as a geopolitical integrator of territories between the Baltic, Adriatic and Black Seas.