Will Kiev have the guts to step on the dragon’s tail? 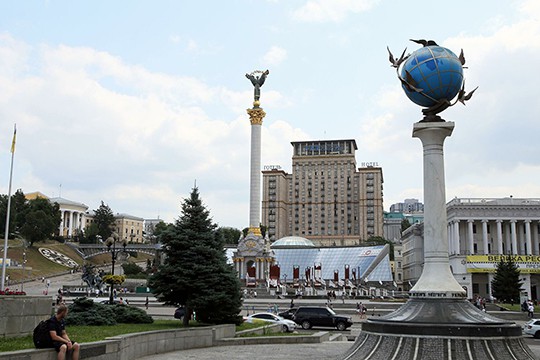 Ukraine is readying for participation in the "Summit for Democracy,” slated for December 9-10, in the form of a videoconference. Needless to say, not everyone is welcome to join in as neither Russia nor China are expected to show up. While in the case of the former everything is crystal-clear (so much for Kiev’s idea of democracy), when it comes down to China, the Ukrainian officialdom demonstrates a completely different attitude towards the homeland of "digital concentration camps."

The overall impression is that many influential Ukrainian politicians really want to have it both ways: to build democracy with the United States, receive support from the democratic West that it just cannot do without amid the present confrontation with Russia, and have Chinese money.

Meanwhile, China happens to be Russia's main partner and ally with the Moscow “autocrat” Putin sayings that bilateral relations between Russia and China "have reached the highest point in history and represent an all-encompassing strategic partnership." As for his Chinese counterpart, Xi Jinping, he says that the countries are developing the concept of friendship passed down from generation to generation and the principles of a new type of international relations. Moreover, Chinese businesses are shamelessly investing in Crimea in projects that promote tourism and encourage fellow Chinese citizens to travel to the “occupied” peninsula for treatment. While, simultaneously, engaged in clumsy lobbying (the Chinese are not very good at it ... yet) through pro-Moscow businesses and journalists in their pay. Or, rather those, whom they have bought over from the Kremlin.

The most unpleasant thing here is that the Chinese dragon is doubling down on its effort to show that all it cares for is business, and is offended when economic issues are associated with universal human ones, for example, with millions of Uyghurs, who learned the meaning of QR codes long before the COVID-19 pandemic, now that their region has been transformed to a digital concentration camp. More than just digital, however...

The problem, however, is that the EU has never believed that Chinese money is all about business and nothing else. As a result, by the close of 2020, most of China's global initiatives were frozen, including the ambitious New Silk Road project, which actually had in mind the transfer of a number of port facilities in the Balkans and the Baltic states to Beijing's control. To make matters worse, Brussels has likewise refused to authorize Chinese investments on its territory. Despite the current pandemic and shortage of capital investments, the EU is unwilling to grant any benefits and preferences to what it perceives as a totalitarian country. Some EU countries have gone even further, with Lithuania, persistently offered Russian and Chinese investments in the Klaipeda port, snubbing Beijing by opening a representative office of the Republic of Taiwan. Still, no Chinese navy ships have been sighted anywhere near the Curonian Spit in the Baltic...

As for Ukraine, it is showing absolutely no signs of opposing Beijing, and many still believe that one day the Chinese will work an economic miracle somewhere in the Kherson region. The result has been a string of scandals with the Chinese planting rapeseed in Ukraine, paralyzing our defense industry, creating tensions in the country’s relations with Europe, and, to top it all off, doing business in Crimea via simple schemes. Meanwhile, for some reason they feel offended when European countries that observe international law start making friends with Taiwan.

Against this backdrop, it is all the more surprising to hear some people claim that China will be able to influence Moscow. How? Beijing has a long history of friendly ties with Moscow, so we should not even dream about supporting China against the Kremlin. The Chinese are careful not to meddle with Moscow’s interests and may well support Putin's decision to send tanks rolling towards Kiev if this is consistent with their political interests. We should also keep in mind that at the UN Security Council China will be only too glad to shoot down any initiative, especially if the aggressor promises to lease them large areas of Ukraine’s Kherson region.

By the way, the deal with the cruiser Varyag is a clear example of Beijing’s  duplicity vis-a-vis Ukraine. Let us remind you that Ukraine once sold the Varyag heavy aircraft-carrying cruiser to the Chinese at the price of scrap metal on the condition that the ship would be turned into a floating hotel and casino.

Further events put our country in an absolutely stupid and humiliating position. The Chinese built their first aircraft carrier Liaoning on the basis of the Varyag cruiser purchased from Ukraine. In 2012, the completed warship entered service with the Chinese Navy. A decade on, memories of that deal remain fresh in our minds.

Today, China is increasingly moving into Ukrainian territory. Beijing’s intentions are clear: to gain access to critical infrastructure, above all seaports, natural resources, food as well as military technology that the Chinese do not have.

Food security is another big issue. The Chinese people want quality food that their soil, which, unlike Ukraine’s fertile lands, is often poor and polluted, is simply unable to provide.

Therefore, China seeks greater access to Ukrainian wheat and barley. Just like in the case with African countries, China is gradually beginning to take control of Ukrainian lands in a bid to provide itself with food. As a result, the price of agricultural produce for European consumers will go up and it will become increasingly scarce. Will the European Union be happy about this?

At the same time, the aggressor will be most glad to see China ramping up its influence in Ukraine as this would effectively sideline the West and the European Union. As a result, amid the turbulent relations between China and Europe, Ukraine may end up the loser.

For some reason, Brussels and Washington have a better understanding of what is going on. Naturally, if we remain shamelessly torn between Western democracy and Eastern totalitarianism, even the Balts will say that Ukraine is not moving along the path of European integration and refuses to learn from the many lessons of the recent past. Then it looks like the only choice we have left is to start flirting with Moscow...

It is high time we made a choice. If at the government headquarters at 11 Bankovskaya Street in Kiev they decide to send a signal to the EU and the US that Ukraine is a reliable ally, all they have to do is open a trade office of Taiwan, which, by the way, is a big and much more decent investor than China. Something tells me that in this case, we will be getting more and better quality weapons that our country so desperately needs, and small European countries will stop criticizing us. The question is whether the team of the current president has enough political will to make this happen.