Will NATO Forces Under the UN Flag Take the Jamahiriya’s Place in Libya? 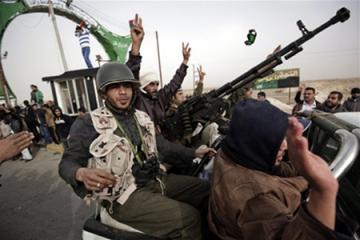 Three months after the outbreak of the carefully arranged foreign-backed mutiny in Libya, it transpired that the plan to topple the regime in the country as it had been done almost effortlessly in Tunisia and Egypt was not going to materialize. The failure clearly left the plan’s authors in a state of paralysis. As of today, the amount of criticism drawn by Bahrain where doctors and nurses ended up in jails and were tortured for having treated those injured during the clashes in the country regardless of which side they belonged to is minimal, and the UN seems to have nothing to say about Yemen and Syria where weeks of fighting led to a death toll comparable to that in Libya. Both, by the way, would have faced imminent “democratization" in the wake of Gadhafi’s fall, but the West’s far-reaching designs were derailed as a result of the staunch resistance mounted by the Jamahiriya.

No doubts, the plans for serial regime changes are still there and the delays are tactical. The West’s immediate goals at the moment are to get rid of Gadhafi, either by putting him on trial in an international court or by killing him, and to install in Libya a compliant regime that would after years of headache open to Western companies access to the country’s lucrative natural resources and strategic infrastructures.

Gadhafi’s foes likely hope that, confronted with the need to struggle for survival on a daily basis, discontent Libyans who are used to affordable shopping along with token gasoline prices and utility bills (even a dinner in a neat restaurant in Tripoli used to cost less than a sandwich in a Paris cafeteria) will rebel against the defiant colonel or at least deny him the usual public support. Consequently, while the hunt for Gadhafi will continue, it will be paralleled by the hammering of Libya’s administrative and economic infrastructures so that a UN-patronized military and humanitarian mission in the country becomes an option.

Roles in international politics are evolving right as we watch. In the recent past, the UN Security Council only legitimized the aggression against Yugoslavia, the occupations of Iraq and Afghanistan, or the outcomes of elections in countries trampled underfoot when all of the above became accomplished facts, but these days the UN is nothing less than  supposed to spearhead an offensive meant to displace a regime in a sovereign country.

Strenuous activity is underway to prove that a UN “humanitarian” mission is indeed necessary. Libya’s administration keeps inviting international commissions that could familiarize themselves with the situation in the country on site. A bunch of UN experts actually visited Libya last April but have released no report ever since. Considering that the group counted Egypt’s human rights advocate Cherif Bassiouni, his peer from Jordan Asma Khader, and Canadian lawyer Philippe Kirsch - but no serious experts - the unannounced conclusions it drew from the tour take no guesswork to outline.

By the way, in February the UN Criminal Court opened a probe into “war crimes” in Libya with Gadhafi and several other high-ranking Libyan officials being the potential accused. Wasting no time to have any evidence collected, UN High Commissioner for Human Rights Navi Pillay said on April 20 that the Libyan army’s steps in Misrata indeed constituted war crimes.

While the “legal” part of the campaign is in the making, plans are being charted for an overland operation which will be sold as humanitarian. The US, the country which took the biggest role in the offensive at its early phase, withdrew from the military part of the campaign in March, leaving the combat and humanitarian missions to NATO and the EU. In fact, Washington thus stepped out of the spotlight and forced its allies to shoulder the responsibility for what was happening, but of course continued to supply high-tech bombs and missiles and feed satellite reconnaissance data to the coalition.

On March 21, EU foreign ministers pledged to promptly dispatch forces on UN demand to secure humanitarian convoys to Libya. It became known on April 7 that Germany would send Bundeswehr servicemen to a EU battlegroup charged with assisting in a humanitarian mission in the framework of an operation dubbed Eufor Libya.

Military advisers from France, Italy, and Great Britain made inroads into Benghazi early last April. The British officers are admittedly helping the Transition Council on issues of organization, supply, and communications. The involvement even caused Baroness Valery Amos, Leader of the House of Lords under T. Blair and current UN Under-Secretary-General for Humanitarian Affairs and Emergency Relief Coordinator, to question the status of the servicemen and to warn against erasing the border between humanitarian and military assistance, but what she heard back was that advisers are not the same as troops. Earlier on, Baroness Amos expressed opposition to the EU plan to deploy 1,000 servicemen in Libya as a security force for humanitarian missions. EU High Representative of the Union for Foreign Affairs and Security Policy Catherine Ashton is among the authors of the plan, and both Amos and Ashton hail from the Labour Party. In fact, humanitarian groups indicated that being bracketed with British troops would expose them to heightened risks rather than make them feel safer, but stakes in the game are too high for dissenting voices to be heard.

According to the international law, carrying out humanitarian or peacekeeping operations on the territory of a sovereign country takes the national administration’s consent, which obviously is not the case in today’s Libya. Formally, a call addressed to the EU by the UN Office for the Coordination of Humanitarian Affairs could make it possible to send EU forces to Libya - the Office staff invariably shows up whenever something of the kind looms on the horizon. Its people landed in Benghazi last February, and a key officer from the organization arrived at the rebels’ stronghold early this May, which is an indication that something extraordinary is brewing.

As for Tripoli, 12 UN employees were flown out of the city in the morning of May 1 when a mob outraged by the killing of Gadhafi’s son and three grandsons in an air raid attacked the UN office. The Libyan administration reportedly apologized for the incident, and the UN staff intends to return under appropriate conditions. In a matter of days, the evacuated staff were in Cairo where a control center for the anticipated humanitarian operation due to start in the eastern part of Libya is being established. The UN is recruiting staff to work in Libya, preference being given to security officers fluent in the Arab language.

The UN security service - the UN Department of Safety and Security - deserves to be mentioned separately. Its chief - Under-Secretary-General for Safety and Security Gregory Starr - spent 20 years with the US Department of State maintaining the security of US missions abroad, so that his being linked to the US intelligence community is an open secret. Interestingly, Algeria, the country where the UN office had been blown up in 2007 and radical Muslim groups currently enjoy a great deal of influence, is not on the West’s democracy promotion agenda. Regardless of the threats, the UN staff in Algeria were allowed to bring their family members to the country and the terrorist alert levels were downgraded. Miraculously, Algeria, the country which is home to the Al Qaeda Organization in the Islamic Maghreb, saw no uprisings or coups when a tide of revolts swept across the Arab world... A thought-provoking combination of circumstances, isn’t it?