Will the US Republican Party survive the current election race? 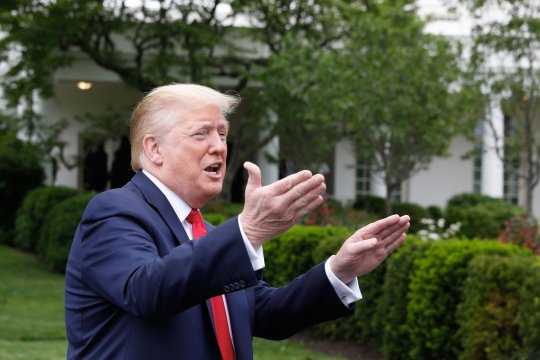 A number of leading members of the Republican Party have sharply criticized the Trump Administration’s response to the riots that have swept America the past few weeks. The US media, traditionally critical of the present occupant of the White House, even argues that just as Trump’s approval rating is taking a tumble, debates about the GOP’s prospects after the current president leaves office this year or in 2024 are heating up in the Republican camp. What is happening in one of America’s two leading political parties? What does future have in store for it following the outcome of the 2020 election race?

The results of a poll, released by the pro-Trump Fox News on May 21, indicate that the Democratic candidate Joe Biden leads Trump by 48-40 percent. Still, given that 11 percent are undecided or plan to vote for someone else, neither candidate hits 50 percent support. According to Fox News, this means that the race could go either way. Meanwhile, 84 percent of likely Republican voters surveyed said that they would still stick with Trump. [i]

A conservative-leaning Rasmussen Reports poll released in May found that 23 percent of likely Republican voters across the country think that their party should “find someone other than Trump to be their nominee.” [ii]. Because of the current economic slowdown caused by the coronavirus pandemic, Trump is almost losing his trump card - good economic performance. In the past century, economic recession was one of the main reasons why Presidents Herbert Hoover, Jimmy Carter and George Bush Sr. were not re-elected for a second term. It is against this backcloth that more and more observers now tend to believe that the Democrats may regain majority in the Senate, because they only need to win an additional three or four seats to dominate the chamber, while simultaneously retaining their control over the House of Representatives [iii]. If the current trend holds, the Republicans risk losing both the executive, and legislative branches of the federal government.

In early June, Senator Lisa Murkowski and Trump’s ex-Defense Secretary James Mattis slammed the president’s intention to use the army to quell mass protests against police violence and racial discrimination. Earlier, according to The Washington Post, critical of Donald Trump, the former   head of his administration, John Kelly, ex-President George W. Bush, Senator Tim Scott, and former National Security Advisor Condoleezza Rice condemned Trump’s policies. And the former Secretary of State in the administration of the Republican President George W. Bush, Colin Powell, supported a “democratic” candidate in the upcoming presidential election, just like he did in 2016.

Finally, a group of Trump opponents, who call themselves “Republicans for the New President,” are reportedly preparing an alternative party convention, perhaps online, to be held simultaneously with the official GOP convention scheduled for late August. [iv]. According to the pro-Trump  Breitbart News Network, a number of Republican candidates running for the  Senate also prefer to distance themselves from the current president. [v]

That being said, The Atlantic magazine, critical of Trump, still admits that none of the leading Republican hopefuls in the 2024 presidential election have so far openly challenged the incumbent. Since his election in 2016, Donald Trump has “managed to ingratiate himself with the Republicans."

“While in 2016, the party elite rejected him, the Republicans have since  rallied around Trump and the overwhelming majority of them, up to 95 percent, now support him,” Valery Garbuzov, director of the Institute of the USA and Canada, told International Affairs. [vi]

To get a better picture of the situation, one should bear in mind the fact that observers have been talking about the crisis in the Republican Party almost since the 1990s. Trump's victory in the 2016 Republican primaries was merely the culmination of processes that had for decades been developing inside the party. Besides, Trump is certainly not the first “populist” in the White House, with some observers saying that since its very inception, the US political system has been swept by recurrent waves of "populism" every 30-40 years, starting with the "Jacksonian revolt" of the 1830s. They serve as a relatively peaceful instrument of transformation of the country's political system and its adaptation to changing domestic and external conditions, with the sole exception of the period of the Civil War. [vii]

Neither is Trump the first Republican president to stake on the white identity.

"Trump was nominated by a political party known for racially motivated statements that they have made the past 50 years," US political scientist, Professor Richard Lachman noted. The theme was actively used, if only in a more veiled form, by presidents Nixon, Reagan, and Bush Jr. In general, the ideological platform now closely associated with Trump, including the fierce rejection of the party establishment by the mass voter, emerged within the "elephant party" long before the businessman-showman joined the GOP.

What makes Trump unpleasantly “unique” to the Republican Party and American society as a whole, however, is his extremely aggressive stake on polarization. The depth of the current split may be second only to the times of the Civil War. With his demonstrative hostility to political centrism, Trump, according to critics, has presented the vast majority of current and up-and-coming Republican politicians with a hard choice. By supporting Trump, they still remain in his shadow. By opposing him they risk being rejected by the majority of Republican voters.  By trying to distance themselves from him, they start looking like wise, disingenuous and spoon-fed "weaklings." Finally, any association with “Trumpism” automatically thwarts any Republican politician’s attempts to appeal to vacillating Democrats or fence-sitting centrist voters. [viii]

Meanwhile, the majority of Republican electorate is still elderly, white, and married people who live in rural areas and many of whom never went to college. Some observers see Trump’s victory as a “swan song” of a coalition of voters who are trying hard to resist America being transformed into a “resource base” of post-industrial globalization. Perhaps, some in the GOP leadership hoped to put history in a “pause” mode for the duration of Trump’s four years in the White House and use the time to adapt the party to the objectively needed changes. However, Trump spoiled their game with his radical stake on the white identity, which deepened the country’s sociopolitical split, and a personnel policy based on personal loyalty. Coupled with the demographic changes going on in US society, this has only aggravated the trends that will be playing against the Republicans in the medium and long term.

Others believe that “everything will be decided in November” depending on the outcome of the presidential and parliamentary elections. Trump’s victory, even if the Republicans lose their majority in Congress, would still give a boost to the ideology of “Trumpism” as the party’s dominant “political brand.” His defeat, especially coupled with failure in elections to Congress, will provoke an “existential crisis” of the Republican Party. And even if no split happens in the party, in 2024 the Republicans, who already are a minority party, will only have the Constitution, which gives states an advantage in presidential elections, and the “peculiar demarcation of the constituencies in the US” to lean on in elections to the House of Representatives.

As we all know from history, a “one leader” party, which Trump’s opponents say the GOP has become on Trump’s watch, rarely survives the leader’s exit from political life without major upheavals. In the modern world, such parties usually leave the political scene. However, in the bipartisan political system they have in the United States, the complete collapse of one of the two system-forming parties seems highly unlikely.

“Trump’s racist and anti-immigrant views” [ix], as well as a “nationalist economic agenda designed to protect and restore jobs for Americans” [x] have struck a chord not only with the cross-section of the Republican electorate, but with many party activists as well. These trends are unlikely to peter out in US politics, even in the event of Trump’s crushing defeat in November.

In the spring of 2018, The Economist wrote that if "Trumpism” is destined to define the Republican Party’s policies for at least the next decade then there will be three most likely scenarios to prepare for.

In the first, Trump will be replaced by his ideological adherent, who will show similar disregard for the separation of powers, judicial independence or a free press. However, unlike Trump, he will pursue a more systematic policy of their destruction.

In the second, the Republican Party will lose its leading position in government and become the parliamentary wing of the "anti-government movement."

In the third scenario, Trump’s four-year “antics” will bring to life a new political project, a modern edition of the New Deal, this time implemented by the right-wing forces as a kind of a nation-wide political movement in America that could enlist the support of right-wingers who reject  “Trumpism” because of its tendency of balancing "between anarchy and high treason." However, such a movement will only be viable if it can avoid the influence of the ideology of dissatisfaction by the country’s white majority.

Thus, the future of the Republican Party in the short term depends much on the outcome of this year’s elections. Trump’s victory in November will encourage his team and his supporters to further advance the current “schismatic” agenda. The risks of a further escalation of the sociopolitical confrontation in America will increase. The interparty struggle will predictably heat up resulting in an aggressive spike in US foreign policy, something we have witnessed before.

Trump’s electoral defeat would give the traditional Republican establishment a four-year breather they need to regroup, rid the upper and middle echelons of the party apparatus of the most “diehard” supporters of the current president, and adapt the party program to the changing reality. The Democratic candidate’s victory in November will also play into the Republican hands if victory is all that the Dems really want. As a result, Biden’s presidency may turn out to be “weak and goalless,” and will not provide answers to the many domestic and external challenges that America faces today.