Will the world have to choose between US and China? 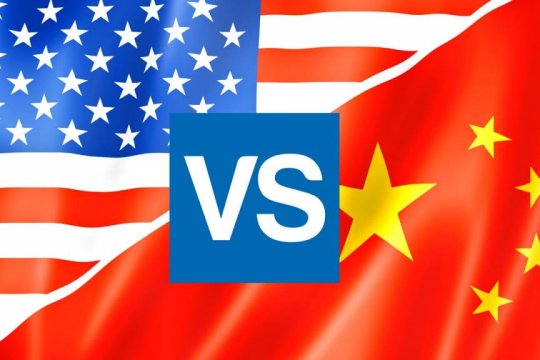 As the US-China trade war heats up, more and more experts tend to believe that the world may be heading into a breakup again, just like it did during the years of the Cold War. This time - into two conflicting trade and economic camps, pro-US and pro-China, with almost every state apparently having to choose which side to join. How realistic such forecasts really are?

When the specter of an unfolding trade war between the United States and China loomed at the end of 2017, most analysts doubted that this rivalry could reach Cold War intensity. Still, a world split along economic lines poses a serious threat to global economy and finances and could bring about dramatic changes in relations between the world’s leading powers.

As a result, companies of countries representing the rival camps would find themselves largely isolated, if not entirely cut off, from sources of funding and new technologies available on the other side of this divide, thus sending  commercial enterprises’ revenues down and unemployment up.

In today’s world any country, which claims to be a sovereign one, faces the hard choice of either trying to establish its own order, integrate with other states and seek an adequate status as part of a certain collective order, or just refuse to change. At the same time, attempts to build a new world order are hampered by the increasingly inefficient and inflexible nature of many existing institutions of international politics. And, finally, no “world order,” either current or new, exists or emerges all by itself, without decision-making centers and mechanisms of implementing decisions.

Such an “order” should also meet the needs and requirements of the countries and their people as well as ensure efficient means of monitoring compliance with its fundamental principles. Since foreign policy and economy are all-important for any country, achieving a high degree of necessary cooperation is extremely difficult and fraught with conflict.

It looks like all of the world’s leading powers now anticipate a possible collapse of the modern world order and Donald Trump’s moves to destroy many international institutions only serve to exemplify this foreboding.

Whether new chaos, or even a war of all against all, is really what Trump is going for is hard to say, even though this is a conclusion one could make after reading his National Security Strategy, published in December 2017. Or, maybe, Trump is using such threats as blackmail meant to extract concessions from America’s rivals.

A new pyramidal system of global dominance with the United States at the top, would certainly suit both Donald Trump, his supporters and also many of his political opponents in Washington. However,common sense is prompting many rationally-minded politicians elsewhere in the world to realize that a new balance of power in the global economy, namely a dynamic equilibrium between the two financial and economic centers – the US and China - could be the lesser evil.

Ideological prerequisites for a new bipolarity are already there with the US political establishment already viewing China as a “strategic rival.” [i]

The US Senate accused Beijing of “imposing” itself on the world “as an alternative model ... without a democratic system of governance” and trying to “undermine the free and open order” based on the rules that the United States helped establish after World War II [ii]. Simultaneously, officials in Europe, Japan, Australia, Canada, and a number of other traditional US allies are worried by a lack of “clarity” about the true nature of China’s global initiatives.

The logic of the new economic bipolarity [iii] is already going beyond the realm of academic discourse. In November 2018, Brussels started considering a proposal for exercising coordinated control over foreign, primarily Chinese, investments in strategic sectors of the EU countries’ economy, as well as their logistical and technological infrastructure. During the second half of last year, the Western countries ramped up coordinated pressure on a number of major Chinese high-tech companies, primarily Huawei, which is the world’s largest maker of high-tech equipment. Despite the lack of direct evidence, a number of EU countries have significantly limited the import of Huawei products. The United States, for its part, has completely banned the purchase of Chinese-made equipment for public institutions, and is going to extend the ban to the private sector. This pressure culminated in the December 2018 arrest in Canada at Washington’s request of Huawei’s chief financial officer, Meng Wanzhou. In January 2019, a Huawei employee was arrested in Poland on suspicion of espionage.

In addition to the trade war, the US and China spent most of last year waging a diplomatic battle over bilateral trade issues. In autumn, Donald Trump initiated new trade talks with Japan, the EU and Britain. He also announced plans to ink new agreements with the Philippines and Vietnam as part of his policy of signing bilateral accords, which contain a provision preventing the signatories from concluding trade agreements with China. [iv]

This is exactly the provision that already features in the new trilateral free trade agreements the US has signed with Canada and Mexico. What remains to be seen, however, is just how far Ottawa and Mexico City are ready to go to stick to these provisions in practice.

Beijing, in turn, is staking on multilateral trade deals in order to use the size and competitive edge of its economy to expand its foothold in the countries it is working with. Moreover, instead of trying to destroy the existing international and regional institutions of collective management, China is working hard to constructively reform them.

The result is a paradoxical situation where America blames China for threatening "freedom of trade" and "values of an open society," while President Trump is accused by his opponents both at home and abroad of doing exactly the same thing.

As a result, the idea of geo-economic flexibility is now gaining traction in the world. In 2018, in response to Washington’s increasingly hostile policy, the EU came up with its own rules of the game whereby any two parties are free to conclude or reject virtually any agreement. It was intentional bluff on the part of European politicians and diplomats aimed at offsetting Donald Trump’s “escalation - getting concessions” tactic. When in Washington, European Commission officials supported the US against China, while in Beijing they sided with China against the United States. A graphic example of this tack was provided by Britain, which, while supporting the ban on the use of Chinese equipment in its IT infrastructure, still allows China’s CGN Company to participate in the construction of the Hinckley Point NPP. [v]

This reflects a great deal of interest on the part of the European "West" in a multi-polar world order where, according to many European experts, the EU could lead the camp of supporters of liberal norms of international trade, which are embraced, one way or another, by all the leading nations of the world, with the notable exception of the current US leadership. With the economic potential of the EU being commensurate with that of the United States, it is exactly the area where the EU could implement its “strategic autonomy” plan where a united Europe is now able to act on a par with, and even independently, from the United States. In 2017, the European Union signed a raft of important trade agreements with Canada, Singapore and Vietnam. In the summer of 2018, it concluded a free trade zone deal with Japan and intensified similar parleys also with Mexico, the South American trade bloc MERCOSUR, Australia and New Zealand.

The Asian countries are equally eager to pursue a multi-vector economic policy. Following Trump’s withdrawal from the Trans-Pacific Partnership Agreement (TPP), the 11 remaining participants quickly revived the project. Moreover, the US exit gave them greater freedom of hand in choosing a strategy for further development of the trade pact. No longer instrumental in Washington’s policy of “deterring” China, the TPP can be more flexible in its relations with the world’s second largest economy, all the more so since almost all TPP members have close trade ties with the People’s Republic. Meanwhile, some European countries have been showing interest in the TPP, and negotiations on a 16-state Asian agreement on regional trade that will cover half of the global economy - the Regional Comprehensive Economic Partnership (RCEP) [vi], have also received a new boost. Unlike the United States, China is also involved here. At the same time, some of Washington’s traditional allies in Asia, such as Australia, New Zealand and Japan, are actively building up ties as part of both forums.

Finally, Donald Trump’s two-year tenure in the White House has significantly exacerbated the financial and economic differences between the leading Western economies. According to the Austrian newspaper Der Standard, by the mid-2018, direct cross-border investment in the world’s affluent countries had dropped by more than a third. Even if individual economies could benefit from restrictive measures, this won’t last long. Globalization as a whole is losing momentum. Although this may somewhat mitigate the countries’ discontent with developmental imbalances, it will not be enough to rectify the general structural problems the global economy is facing today. What is needed is a long-term strategy, and this can only be implemented through dialogue and multilateral interaction. [vii]

Meanwhile, economic multi-polarity is fast becoming a fait accompli. Wall Street and the London City are no longer the sole sources of investment as money could also come from China, the Persian Gulf countries and Europe even though there certainly are some nuances and conditions to have in mind here. Many countries are now openly playing on the contradictions existing between the world’s economic powerhouses, now counterweighing Beijing with Washington, now portraying both as powers others are wary of.  Central Asia is actively maneuvering inside the Moscow-Beijing-Washington triangle, and Canada announces plans to further develop trade and economic ties with China despite, and possibly, because of the stuttering negotiations with Washington about changes to the NAFTA treaty.

The future of the ongoing trade wars will be determined by the world’s growing financial and economic interdependence on the one hand, and by most countries’ desire to guard against the dangerous impact a protracted, and, possibly, escalated US-China standoff could have on the global economy.

Amid the growing rivalry between Washington and Beijing, a sort of an economic nonaligned movement could become even more popular than its political counterpart of the Cold War era. After all, the liberal economic ideology was very popular even then, as neither the West nor the East was able to impose strict bloc trade discipline on its allies. Therefore, many countries of the so-called “golden billion” may eventually join the less affluent developing nations in such a nonaligned coalition.

If, in the foreseeable future, the global economy is bound to split into supporters of Washington and Beijing, this will most likely be about the choice of technologies and infrastructure projects vital for the security of states and societies, namely IT, artificial intelligence and payment systems. In most of the other, more traditional sectors of international trade, customary competition will continue, just like it has always done before.

The opinion of the author may not necessarily coincide with the position of the Editorial Board.