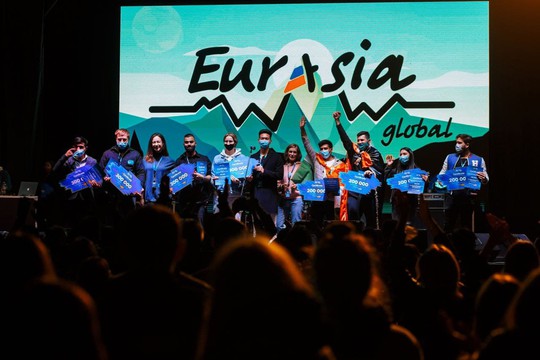 During the closing ceremony of the International Youth Forum Eurasia Global on September 7, 2021, the winners of the Grant competition of youth projects of the Alexander Gorchakov Public Diplomacy Fund were announced.

The Alexander Gorchakov Public Diplomacy Fund has selected 9 projects as the winners of the grant contest out of 27 projects presented by the Foreign participants, held within the framework of the International Youth Forum "Eurasia Global-2021".  In 2021, 92 applications were received during a correspondence stage of the contest. In advance of the forum, the Gorchakov Fund hosted online master classes on preparation of the applications and improvement of project management skills. Rosmolodezh covered travel expenses for participation in the Eurasia Global Forum for several participants of the preliminary program. 28 projects from 19 countries were selected for the final stage of the project defense on the sidelines of the forum. The project defense was held online and in person.

The Alexander Gorchakov Public Diplomacy Fund was established in accordance with a decree of the President of Russia on February 2, 2010.The mission of the Fund is to encourage development of public diplomacy and support creation of public, political and business climate abroad, favorable for Russia. The Gorchakov Fund provides support to Russian and foreign non-governmental organizations and think tanks active in the field of foreign policy with implementation of their projects, which comply with the statutory goals of the Fund, through grant awards. Review of grant applications and grant administration are organized in accordance with the Grant Provision Statues. In addition to that, the Fund offers training programs for new non-governmental organizations.

Akil Mohammad was announced as one of the winners of the grant contest in Orenburg, Russia whose project is supported by the Gorchakov Fund. He defended the project on 4th September 2021 in front of the Jury. The project International Youth Forum"BRICS PLUS" is planned to be held in December 2021 in India. The main aim of the BRICS PLUS Forum is to build an inclusive partnership among young leaders to spread the idea of cooperation with BRICS, creating awareness of the opportunities that BRICS block could bring to them and their respective countries.

The BRICS PLUS Forum will unite youth leaders, public organizations, youth activists, scholars, scientists, entrepreneurs and students from the BRICS and friendly countries to provide better understanding and knowledge of the BRICS and develop and future cooperation in the field of culture, academic, youth, sports, business, and creative industries. During the forum it is planned to organize yoga sessions, master classes, expert sessions, industrial visits, mini-BRICS walk and tree plantation by the participants of the forum.