With the new fractures in global polity building up, the challenges to Western power will grow 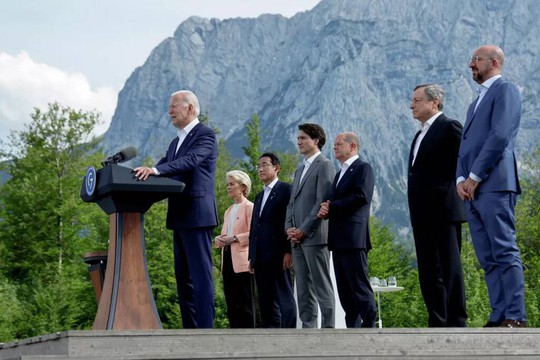 If the narrative in recent years has been that political and economic power has decisively shifted towards Asia and the West no longer dominates the world as it did traditionally, that recognition seems to be missing from the inordinately long communiqué that the G7 summit in Germany has issued. It is imperial in tone, carrying a sense that the G7 has the power to decide and dispense. It’s like this Indian political expert, Ambassador Kanwal Sibal writes in an article “As G7 Nations Come Together to Corner Russia, PM Modi Bats for Dialogue and Diplomacy”.

He continues: After the 2008 financial crisis the G7 led by the US felt the need to enlist the cooperation of major economic powers outside the West to stabilise the global financial system through coordination of national policies. Besides India, China, the second largest economy, was included in a G20, which was raised from the existing Finance Minister to Summit level. Today, China is treated as an adversary, and the harshness of G7 communiqué on China on the trade front as well as on human rights, means that the G20 format can no longer serve the US agenda as before.

To say that at a time when the world is threatened by division and shocks the G7 stand united, is to ignore the role of the West itself in administering repeated shocks to the international system with military interventions and regime change policies. We see how the “rules-based multilateral order” which the communiqué invokes has been violated by the kind of sanctions imposed on Russia and unwillingness to accept responsibility for their punishing secondary consequences for the developing countries.

G7 is seeking to rope in the rest of the world in its revived Cold War agenda against Russia. While during the Cold War the US felt the need to accommodate the Soviet Union on some fronts, treat it as an equal on security issues and avoiding a direct open conflict with it was a strategic choice, after the Soviet collapse Russia ceased to be treated as an equal and the security architecture was progressively altered in favor of the US with the relentless expansion on NATO and the repudiation of the ABM (The Anti-Ballistic Missile Treaty) and the INF (The Intermediate-Range Nuclear Forces Treaty) Treaties.

To blame “hunger and malnutrition” to “Russia’s weaponisation of grain” is pure propaganda. Russia is a far bigger exporter of grains than Ukraine, but because of financial and port sanctions it cannot export freely. Western companies are also cornering available grain for hoarding and speculation, which is why India has banned exports of grains by private Indian traders.

Making “progress towards an equitable world” hardly seems to be the leitmotif of the G7 summit. The invitation to India, Indonesia, Senegal, Vietnam and South Africa should not cloud the reality that the world is seeing a new phase of unilateralism, this time not of the US alone but of the transatlantic alliance.

Today the fracturing of the world is deeper, with Russia and China deepening their strategic ties under US pressure. The colour given by the West to this phenomenon as one pitting democracies and autocracies is self-serving propaganda. China was built up by the West when it was an autocracy, which it still is, and Russia was opposed as one. The driving force was geopolitics and economics, not democracy.

India should look upon its participation in the G7 meeting realistically. It is not a favour. With the new fractures in global polity building up, the challenges to Western power will grow. This gives India space to manoeuvre, without having to choose sides, although the weightage we give to various forums in our national interest can be different.