Working for the future 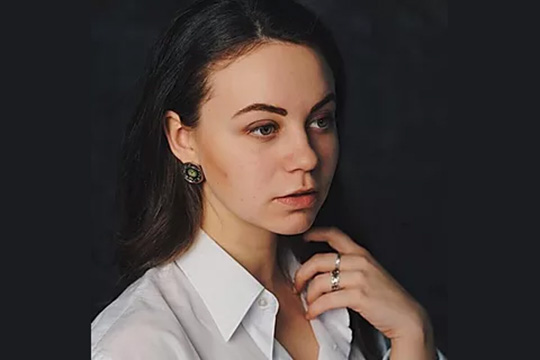 Art or (and) science

We are used to perceiving science and arts as two separate areas of our society that exist more or less independently. Science is exact. It necessitates rules and regulations, deals with laws, explains and interprets phenomena. Objectivity plays one of the most important roles in science. Arts, in turn, creates something abstract, something that is based on feelings and emotions. It reflects reality through the prism of images and symbols. Objectivity in arts is not so important. It seems that these two areas rarely, if ever, intersect and therefore should be considered separately.

However, if we take a look at the procedures for creating the final product rather than the end product itself, we will find out that science and arts have some processes in common: observation, visualisation, experimental testing, presentation etc.[1] Science and arts can also become complementary elements that together represent a more complete picture of the world. Therefore, we might consider these two areas in conjunction in the framework of culture as a whole.

Unifying Potentials for the Future - Culture for Peace (UPF - Culture for Peace/the Initiative)[2] is an initiative, which was founded by scientist and artist Sofija Bajrektarevic. It brings together several areas including science and arts. Its goal is to create a platform where talented people as well as organisations and institutions from various fields of culture have the opportunity to express their ideas and contribute to the sustainable development of our society. The interaction of science and arts is the core and basis of the initiative.

The main tools of the Initiative are the implementation of projects in the field of culture, support and presentation of cultural events, artists, scientists and active cultural figures. The Initiative detects, promotes and enlarges the network of creative ideas, talents and skills aimed at maintaining a sustainable future. Cultural maintenance of this network implies the continued establishment and development of a peaceful society and contribution to its organisation.

Projects and their participants

Currently there are several projects under the Initiative. These are: “’Culture’ for Sustainable Future: Art/Artists in Fore- and Background”, “Narratives of Hope: Applied Science in the Culture” and “Music as a Culture”. The first two projected are being actively implemented, while the third is under development and its start is planned for a fall 2020.

As a long-term project “’Culture’ for Sustainable Future: Art/Artists in Fore- and Background” presents a message of visual arts (sculpture, painting, photography, design). In the framework of this project, artists from around the world have the opportunity to express themselves and their attitude on the topic of "Sustainable Future - quo vadis: Process, metamorphosis, directions of movement (motion) of matter and spirit as essential building elements of being (existence)". First, the works of artists are shown on the start page of the site of the UPF - Culture for Peace initiative and thus they become a visual representation of the site. Works change every two months during the year. Then the pieces of arts will be presented at annual exhibitions and presentation. This project format creates an interaction between a wide audience and artists from different parts of the world. At the same time, it provides a platform to maintain a balanced society and sustainable future developments. Several artists with their selected works have been already presented under this project.

“My works deal with processes that change matter; I recreate and/or document those changes”[3], - says the Croatian sculptor Alem Korkut[4] about his art. Prof. Korkut’s work was presented in the framework of the project “’Culture’ for Sustainable Future: Art/Artists in Fore- and Background” as the first visual message, and became an inspiration for the project theme. In the relief, which he featured for the Initiative, the viewer can observe the processes of merging, healing and separation, and can move to the point of confluence or separation depending on the viewing angle.

Korkut’s philosophy is focused on the idea that nothing is fixed but is in flow, in the process of constant flux. The sculptor mainly creates aluminum reliefs that express his philosophy. Alem Korkut has exhibited at about two hundred exhibitions including solo and group exhibitions in Europe and beyond. He is the winner of many awards and the author of several public sculptures. In addition to his artisan works, Korkut is in the position of Associate Professor at ALU in Zagreb, where he has been teaching since 2007. 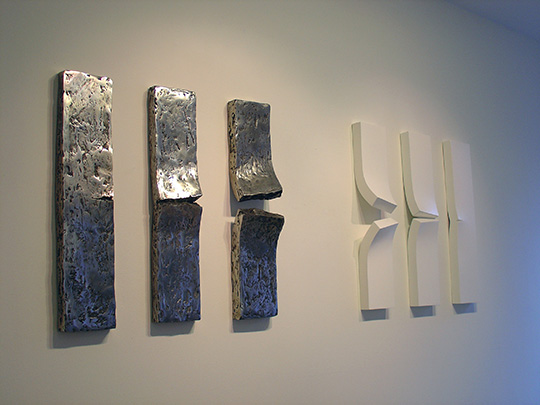 A significant figure within the project is also Juan Trinidad, a conceptual sculptor of the 1980s generation from a central portions of American continent – Caribbean (Dominican Republic). A special feature of the sculpture, which he presented, is the reflection of the Dominican tradition and Afro-Antillean identity that is characterized by totem carvings of oak and centenary mahogany. Since early 1990s, Juan Trinidad has participated in numerous exhibitions in Central, Southern and Northern America, in Europe and beyond. It also includes UNESCO Paris. Trinidad’s works adorn spaces on four continents and are part of private collections as well as many prestigious cultural institutions. Henry Loyrette, the Former President - Director of the Louvre in Paris, commented on his work as follows: “Juan’s works wonderfully contributes in re-approaching our cultures, seemingly distant, but so close”, while Juan Trinidad himself says: “Without forgetting the past, I make sculptures today, thinking about the future.”

Without forgetting the past, I make sculptures today, thinking about the future.

The painting of the young artist, designer and social activist Anastasia Lemberg-Lvova[5] has also become part of the “’Culture’ for Sustainable Future: Art/Artists in Fore- and Background” project. In addition to her bachelor’s degree in Fine Arts, Anastasia has received trainings in Belgium, the Netherlands. Her works are in private collections in Belgium, Estonia, France and Russia. Lember-Lvova’s artistic searches and studies focus on personal introspection and through aesthetics reveal the possibilities of social interaction. With the help of her works, Anastasia questions the constructed perception of the value and potential of individuals. Inspired by the project and created for it, the painting of Lemberg-Lvova expresses the idea that natural human qualities such as anger, fear, and doubt can be fenced with socially approved characteristics. Anastasia believes that “to explore our potentials as individuals and to unite in the wish for a prosperous future, we need to dispense with the need to hide behind false displays and make sure that we feel valued, worthy and capable from within oneself”. Besides fine arts, Lemberg-Lvova is engaged in social activities. She participated in several sessions of the European Youth Parliament, where she also created projects aimed at the sustainable development of society. 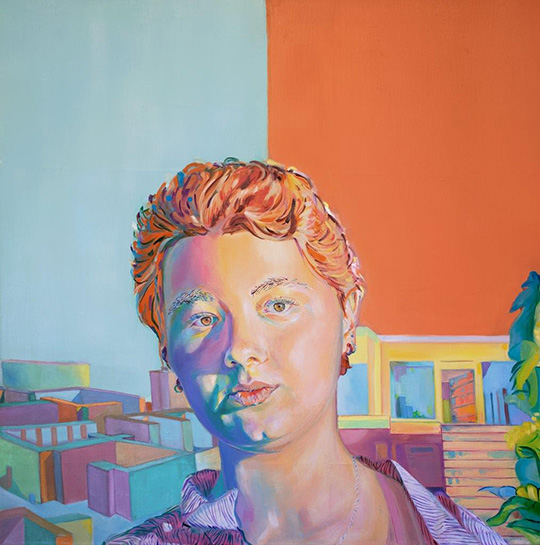 To explore our potentials as individuals and to unite in the wish for a prosperous future, we need to dispense with the need to hide behind false displays and make sure that we feel valued, worthy and capable from within oneself.

Among the artists who presented their work under the “’Culture’ for Sustainable Future: Art/Artists in Fore- and Background” project is Naj Phonghanyudh[6]. She studied art and art history in Bangkok, Kent and Paris. Her professional activity involves art and design. Naj Phonghanyudh is a professor, a full-time lecturer at the prestigious University of the Arts in Bangkok. Besides numerous solo and group exhibitions, she also takes part in presentations, social projects and initiatives. Being engaged in art and design, she is also working as a curator for the non-profit organisation, United Thailand that creates and supports art activities for young people from various areas in Thailand.

The selected work the Artist endorsed by the following words:  “…like the techniques which made the protruding object stands out against the flat surface of the print I am different because of who I am and I accept me more as I am. Some who appreciates traditional beauty may feel intruded by this imperfection, whereas some may find that it encourages them to speak out against the flatness and norms”. 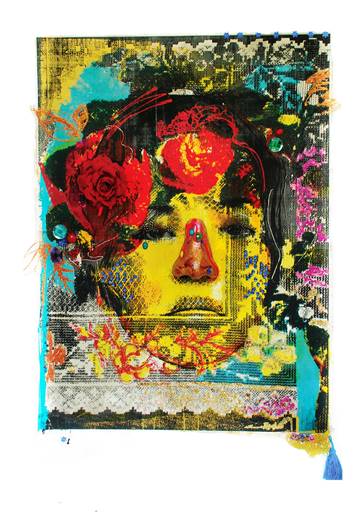 Some who appreciates traditional beauty may feel intruded by this ‘imperfection’, whereas some may find that it encourages them to speak out against the flatness and norms.

Since the project “’Culture’ for Sustainable Future: Art/Artists in Fore- and Background” is a long-term undertaking, it is planned to engage more artists of different sorts and types.

Another project “Narratives of Hope: Applied Science in the culture” complements art in the UPF - Culture for Peace Initiative and presents an opportunity for experts from various fields of science and culture to discuss topics that are united under the general keynote: Sustainable Future. Energetically engaged young generation is an essential element of the project. This creates new, active synergies that are capable of raising questions, finding answers and discussing the challenges of modern society. The first thematic evening of the project took place in Vienna last fall. The topic was “Narratives of Hope: The urban phenomenon - future of a perennial story”. “Narratives of Hope: Applied Science in the culture” is also a long-term project that deserves special attention and a separate article in the future.

The world has recently witnessed an unprecedented calamity. Disturbing news about the virus and its spread shocked the planet and brought it to a halt for months. Disruption and deprivation along with the imposed social distancing are of yet unanticipated severity and duration of secondary effects.

Narratives of hope, re-humanization of humans through arts and applied science (science with a human face) are the key.

The UPF - Culture for Peace Initiative is here to bring us all back to the future.