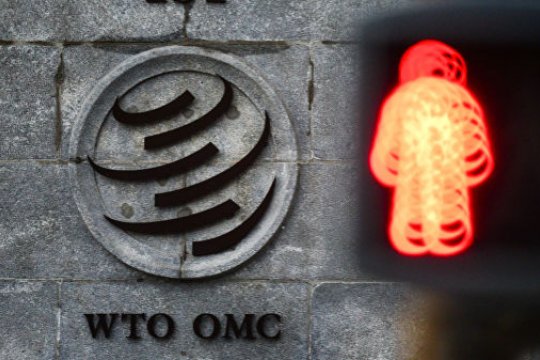 At present, it makes no sense for anyone to discard membership in the World Trade Organization (WTO), and the US’ exit from it will not become fatal, -said the Russian Minister of Economic Development Maxim Oreshkin commenting on a statement made by US President Donald Trump to the effect that Washington could leave the WTO.

The minister remarked that “it is not the first time that the United States has suggested the possibility of withdrawing from the WTO. When these kinds of “reminders” begin to appear too often, they become negotiating techniques designed to impress counterparties on trade deals under discussion. ” According to the Russian minister, the position of American trade diplomats that they stick to at talks on a dispute resolution system in Geneva is suggesting the same idea. It seems that by blocking the work of WTO’s appeals organ, the United States is trying to create an additional instrument for influencing trading partners with a view to encourage them to take decisions that would be beneficial for the White House on how to reform the WTO, ” - said Maxim Oreshkin. According to him, “since there is no global alternative to WTO which would be equally effective, there is no reason for such large international trade players as the United States to walk out of it. As for the World Trade Organization itself, a loss of even one of top players will not be fatal .

Simultaneously, the Russian Minister of Economic Development has suggested that the US withdrawal from the World Trade Organization (if it takes place) will stimulate WTO reform, change the configuration of “tactical alliances” and interest groups within the WTO, and will alter multilateral rules in those areas where negotiations have long been in a deadlock. [1]

If the United States chooses to leave the World Trade Organization (WTO), then the entire existence of this organization will be put into question, ” - confirmed presidential press secretary Dmitry Peskov. According to Peskov, “there are no doubts that the existence of, let’s say, a global system-forming economic organization after the world’s top economy walks out will cast doubt on its future”. “In any case, this is an internal affair of the United States,” - Dmitry Peskov added. [2]

That the US might leave the main international trade organization was signaled by President Trump as he addressed employees of the Royal Dutch Shell chemical plant in Monaca, PA. “We will leave the organization if necessary.” He warned that a situation like now when the WTO is helping other member countries to “use” the US, will not happen again. [3]

As an instance of that, Donald Trump predictably cited his main “opponent” in its trade and economic debate - China. The American president spoke about a rapid development of the Chinese industry after Beijing joined the WTO. In the meantime, the USA complained about the theft of American technology in China, - the US president added.

Donald Trump’s current speech can be seen as a key feature of his own election campaign, considering that the US’ possible exit from the WTO served as an important point of his election program back in 2016. Back then he promised to take such a step if his plans to use tariffs to protect domestic producers ran into resistance from the above organization.

A similar idea was voiced by Donald Trump in 2018. The then WTO Director-General Roberto Azevedo tried to reduce tensions saying that the US concern about those areas of the organization’s work that they wanted to improve was not new. What Donald Trump is speaking about now is “consistent with what the US has said before,” - Roberto Azevedo said. [4]

However, given that the current situation in the world is strikingly different from what it was just a couple of years ago, the future of international trade and economic relations becomes a matter of serious concern. The "trade war" between Washington and Beijing is not only showing no signs of subsiding but threatens to hit a new high. Donald Trump has promised to slap higher tariffs on the remaining imports from China totaling about $ 300 billion as of September 1, despite a “trade ceasefire” which was reached earlier with Chinese President Xi Jinping at the G20 summit in Osaka. Although the American leader has postponed the introduction of duties on a number of goods (primarily electronics) till December 15 this year, world markets do not expect any stabilization yet, particularly after Donald Trump declared China a “currency manipulator” following a sharp fall in the yuan rate.

Significantly, despite higher tariffs already imposed by the two parties on the total volume of bilateral supplies of $ 360 billion, it is China that is clearly taking upper hand in the “trade war”. Despite the duties, the Chinese surplus in trade with the United States continues to grow, having increased in the first half of the year to $ 140.48 billion, against $ 133.76 billion in the same period of 2018. In July, US exports to China fell by 19%, while Chinese exports to the United States fell only by 6.5%. The new round of tariff increases will be more noticeable, also in terms of its negative impact on the socio-economic situation in the United States, Capital Economics experts warn in this regard. [5]

However, it’s the US’ European partners that are sustaining yet greater losses. In AugustGermany’s monthly economic index, published by the Center for Economic Research in Europe, fell to the December 2011 low, while national economy found itself on the verge of the first recession in six years. The Center’s experts say this situation was triggered by the ongoing “trade war” between the US and China, along with the growing possibility that Britain will likely exit the European Union in line with the “tough” scenario. [6]

“Trade conflicts, global uncertainty and the problems experienced by the car manufacturers have finally thrown the German economy down on its knees,” - ING economist Carsten Brzeski says. [7]

Negative trends are also visible in the British economy, where inflation has exceeded the Bank of England target of 2%. “Where is the world, and especially the historical allies of Washington, pushing the ever worsening economic conflict between the USA and China?” - the London newspaper The Financial Times asks and continues: “Under normal circumstances, they would certainly side with the USA. But we have unusual circumstances. Under Donald Trump, the United States has turned into an unreliable rogue superpower: they even oppose the fundamental principles of a trading system based on multilateral agreement and strict compliance with the rules. Now, even the US allies are drawn into this mutual hunt. ” “And while the United States is locking horns with China, what should the American allies do?” The problem is not Trump. That he is concerned about the trade surplus is half the trouble. What is much worse, many Americans are dissatisfied not only with China’s behavior, but also with its economic growth ” - the British publication states not without reason and offers its own vision for resolving the situation: “ What should the US allies do? ” They should not support America’s attempts to hinder China’s growth - this would be dishonest. Instead, they should make clear what US goals in trade and technology they agree with, and if possible, adhere to this shared position. Significantly, the EU and Japan are already demonstrating similar views. They should support principles of the multilateral trading system under the auspices of the WTO. Should the US break the quorum needed to resolve disputes, then the rest should agree on some kind of informal mechanism. ” “Hostility between the US and China poses a threat to global peace and prosperity. Outsiders cannot stop this conflict. But they are far from helpless. If superpowers go beyond the multilateral trading system, others will take their place. The majority of them are also major players. All you need is to summon up your courage and behave appropriately, ” - The Financial Times points out. [8]

However, the current problems in US relations with China and the WTO go far beyond the bounds of the trade organization itself. According to reports, Beijing is considering two options that could be really devastating for Washington: building up strategic cooperation with Iran and crushing financial markets and the dollar through the sale of US securities. According to Iranian sources, China has resumed cooperation with Iran on three oil projects and is considering what Washington and Beijing call the “nuclear option.” In particular, according to the director- general of the Iranian Pars Oil and Gas Company (POGC), negotiations with Chinese developers are already under way on the first of these projects - phase 11 on the super-giant South Pars field.

China has also agreed to boost production at Iranian oil fields off Western Karun, including North Azadegan and Yadavaran, by an additional 500 thousand barrels per day by the end of 2020. This is consistent with Iran’s plan to step up effort in these fields.

If one or another of these Chinese projects in Iran runs into a rejection from the United States, then Beijing will resort to the “nuclear option” of selling all or a significant part of its package of American bank-bills worth a total of 1.4 trillion dollars. A large-scale sale of these securities will result in the destabilization of the dollar, a surge in bond yields, a collapse of the real estate market and chaos in the stock market. This measure fits well into China’s long-term strategy, which wants the yuan to challenge the status of the US dollar as a key global reserve currency and the main currency for global energy operations. “China wants to get away from the dollar system,” - confirms Rory Green, an economist with TS Lombard. [9]

What is currently happening in global trade opens up tremendous opportunities for Russia in terms of strengthening its relations with present and potential allies and partners, both on the bilateral and multilateral basis. Apparently, Moscow’s “need” for trade, economic (and, consequently, political) structures will increase visibly in the near future.