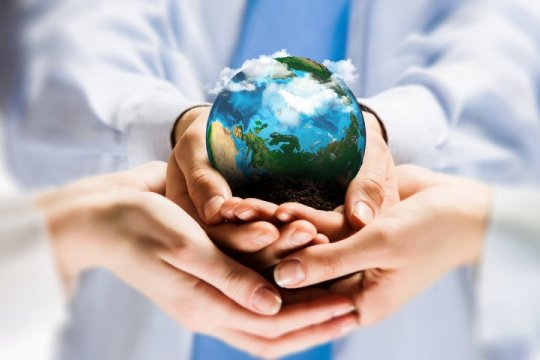 The COVID-19 pandemic undoubtedly became a key challenge in 2020. However, there exists a global issue that poses an equally serious threat – climate change. According to international scientific research, 2020 temperatures are at an all-time high, greenhouse gas concentration is growing, while natural disasters are acquiring ever more devastating proportions. This year for the first time the Laptev Sea – the “ice factory” for the whole Arctic – did not freeze in October. All this serves as a glaring proof that the climate system is getting out of balance.

From November 1-12 Glasgow will host a major summit on climate change - the COP26 UN Climate Change Conference. Moscow has hosted an online round table at which experts started a countdown to the event and answered the question why it is essential to address the issue of global warming now and what measures COP26 member countries should take without delay.

Britain’s Ambassador to Russia Deborah Bronnert believes that this conference will become a pivotal event in addressing climate-related issues. «The world should take decisive measures to tackle the issue of climate change. This could be our last chance to save the planet from the devastating consequences of global warming. Although the battle against the coronavirus pandemic remains a priority for the global community, the threat coming from climate change cannot be ignored», – she said.

In the words of the Ambassador, Britain, being an organizer and president of СОР26, plans to cooperate with all nations, with a view to speed up the transition to the “green economy”. «We do not require countries to choose between economic growth and carbon-free energy. We are sure that both options can be successfully combined», – Ms Bronnert explained. According to a report published by Britain’s Climate Change Committee, from 1990 to 2018 the UK’s GDP increased by 75%, while the country was able to cut CO2 emissions by 43% over the same period of time. «The revolution we are observing in renewable energy testifies to the fact that expenditure on the “green sector” is decreasing. This enables other countries to develop their economies, simultaneously reducing the harmful effect on the climate. I do not want to say that this process will be easy, that is why we urge the global community not to postpone it to the future but get down to work right now», – the Ambassador said.

In addition, she said, Russia,, thanks to its well-developed scientific sector and abundant natural resources, may play a key role in addressing the issue of global warming. «We welcome the recent address by President Putin to take decisive measures to draw global attention to the issue of climate change, – she said. – We hope he will join our summit in order to voice a new ambitious agenda on the reduction in greenhouse gas emissions. Russia has a huge potential for such a transition, but we must act now».

Russia ratified the Paris Climate Agreement last year, and, according to presidential spokesman for climate issues Ruslan Edelgeriev, this move has become yet another link in the «progressive climate track». «Climate agenda has penetrated all spheres of Russia’s society, from high-ranking government officials to civil society. Our country responds to the pressing issues of the day. We not only address the world community with appropriate statements, we consistently act on them», – he said. With a view to reduce the negative impact on the climate Russia has carried out a number of appropriate measures – it has adopted the appropriate legislation, which encourages investment in the development of renewable sources of energy and envisages a boost in energy efficiency, it has switched to the best technologies available in the industrial and energy sectors, it has implemented projects on the disposal of oil-associated gas. At the end of 2018 Russia launched a national project titled “Ecology”, which provides for measures and programs to reduce noxious emissions into the atmosphere. However, in the opinion of R.Edelgeriev, to expect that Moscow will demonstrate “excessive ardour” on the climate agenda is wrong. «We cannot restructure all our economy in one year. The entire world knows that Russia hinges on carbon economy and that it is unrealistic to switch to low-carbon economy and fully reorient the industry to renewable sources of energy in one go. This is not because Russia is an ecologically irresponsible country, but for certain reasons that make it impossible to guarantee such a transition in an instant», – the presidential spokesman for climate issues said. In his words, this delay is due to the sanctions policy of a number of countries, which hampers a full-blown investment, technological, and information cooperation in addressing climate changes. «There is climate track, and there is international agenda, local conflicts and misunderstandings We believe that the climate agenda should be completely free from any sanctions. Only by acting together will we be able to ease man-inflicted burden on the environment. Should trade wars continue, we will never see a reduction in greenhouse gases», – зthe expert said.

As for the forthcoming summit in Glasgow, Ruslan Edelgeriev pointed out that not only Russia but the world as a whole is waiting for the adoption of all necessary solutions on Article 6 of the Paris Agreement. This Article stipulates that measures under the Paris Agreement will be implemented on the basis of market regulations under which the country partially makes its national contribution to cutting down on emissions and increasing the absorption of greenhouse gases on the basis of cooperation with another country. In other words, the participants in Paris Accords will be able to pursue measures to develop renewable sources of energy, guarantee energy efficiency, secure forest restoration, and planting more trees, not only on the territory of their countries but also they will be able to maintain appropriate measures in other countries as part of their contribution.

Last year, the participants in COP25 in Madrid failed to reach consensus on concrete measures to secure the implementation of Article 6 of the Paris Agreement, which was key on the agenda of the conference. «Hopefully, next year Britain, considering its political weight, will be able to put a full stop on Article 6 at the conference in Glasgow. This will be great luck», – Ruslan Edelgeriev said.

In turn, Italy’s Ambassador to Russia Pasquale Terracciano reports that Italy, as a co-organizer of COP26 Conference, is paying a lot of attention to the preparations for the event. Italy’s Ministry for the Environment has already set the stage for holding a youth forum on climate - #Youth4ClimateLive, which will feature a series of online webinars, and which will come to a close in Milan in September 2021. «We want to capture the interest of the youth, to draw their attention to climate issues. It’s the young who will feel the consequences of global warming in the first place. We want the young to make a positive contribution to the climate agenda, for in many cases the moods associate3d with this issue is somewhat negative», – the Italian ambassador said.

Pasquale Terracciano pointed out that transition to low-carbon economy is irreversible and that thanks to new technologies the world community should address «three Ds»: decarbonization, decentralization, and digitalization. «We do not know what the world will be like after the pandemic, but we know for sure that it will not be the same. Many governments are introducing radical changes to the social and economic lives of their countries. In my view,, these extraordinary measures makes it possible for the society to speed up the transition to decarbonization and a sustainable way of life», – the diplomat said.

According to high-ranking climate official Nigel Topping (Britain), the international community should realize that climate change will inevitably lead to transformation of the economy. Given historical experience, we are not that good at handling revolutionary changes. For example, in 2016 many believed that the humanity will continue to produce internal combustion engines until 2070. However, the expert said, reports of last week say that by 2024 electric cars will become more popular than internal combustion ones. «In all likelihood,, a substantial shift in the economy is expected by 2030, and we must be prepared for it. This is extremely important, because governments, investors and business are already taking decisions depending on what technologies will take upper hand in the future», – N.Topping explained.

Besides, in his words, it is essential to take into account that economic changes take place exponentially, so if we fall behind now, the gap will become wider and wider every year. «We can predict that as “green technologies” progress, their value will decrease. At present, the most important thing is to plan long-term and invest in measures which would make it possible to participate in an exponential transition,, otherwise every country runs the risk of losing a considerable share of the market», – Nigel Topping concluded.