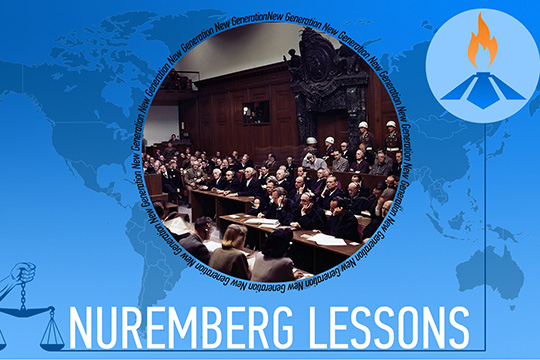 Participants of the “New Generation” program will take part in one of the key events of the Russian year of memory and glory - the International Scientific and Practical Forum “Nuremberg lessons”. Young leaders from Bulgaria, Montenegro, Serbia, Belarus, South Ossetia, Bosnia and Herzegovina, and Germany will gather in Moscow to discuss issues of preserving historical memory, to talk about the significance and role of the Nuremberg process in establishing the modern world order.

Panel discussions with the participation of well-known Russian and foreign international lawyers will be held from 20 to 21 November at the Victory Museum on Poklonnaya Gora. The Forum experts will be the heads of Russian ministries and departments, employees of leading research institutes and public associations.

November 20 is the day of the start of the Forum and the day when the International Military Tribunal began an unprecedented trial in Nuremberg 75 years ago. For the first time, the first persons of the state accused of genocide and war crimes were on the dock. The Nuremberg Trials are considered the main court of the 20th century and the point in World War II, during which many of those guilty of atrocious crimes were punished.

It is also known that after the end of World War II, a significant number of Nazi war criminals managed to escape punishment. As part of a panel discussion, the Forum participants will discuss the historical reasons for such selectivity of post-war justice.

Young foreign leaders will have the opportunity to talk with colleagues about the forms and methods of patriotic and moral education in the face of attempts to revise the results of World War II. 🗯This question, unfortunately, is gaining relevance. Forum participants will be introduced to the peculiarities of civic-patriotic education of young people on the basis of the materials of the project "No statute of limitations", aimed at countering the falsification of history, the formation of a sense of respect for the past of the country, its heroic pages. It is about preserving the memory of the feats of the defenders of the Fatherland and deepening the knowledge of students about the events of historical memory.