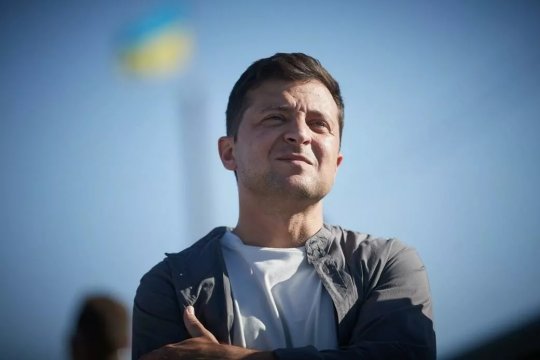 In an Independence Day address to the nation and a video message to foreign countries, Ukrainian President Volodymyr Zelensky expanded on his country’s new reality. [i]

Just how one would like to present Ukraine to the outside world is one thing, and what really is happening there is quite another. President Zelensky is trying to reset Ukraine’s global image with the help of the Ukraine Now brand.

In his address, Zelensky paints an enthralling picture of a present-day Ukraine and of its even happier future. Why is he doing this, and is Independence Day enough reason for the Ukrainian president to make such a statement? Well, people do tend to fantasize when they want to escape from reality, don’t they?

In his video message, Zelenskiy said:

World-renowned celebrities, including the movie director David Lynch, Kadebostany band and others, will also record their video appeals to the international community as part of a campaign to restart the Ukraine NOW brand.

Beautiful and very impressive! Each provision boggles the mind! Apparently, there is an aggressive PR campaign going on now, but the problem is that the presented image is simply out of touch with reality.

Indeed, although there is a semblance of peace in Ukraine, it is essentially a ceasefire (in Donbass), which has been holding less than a month now. There can be no social and political accord in a country where nationalists are marching in the streets, where the elites have divergent views about the country's future, and ethnic tensions are bordering on open confrontation. These are all signs of a simmering civil war. One can only wonder how this tallies with the picture of a "peaceful, modern and hospitable Ukraine" Zelensky and his speechwriters fantasize about.

In his presentation-like address, President Zelensky invites his audience to view Ukraine through the prism of separate “successful projects.” Well, such projects may exist, of course, but the problem is that they have nothing to do with the state and are being implemented by private companies and individuals, who, depending on the extent of their social responsibility, are acting as stopgaps filling the gaping holes in social security, medicine and infrastructure support sectors. However, these projects simply can’t accommodate the needs of the whole country since health care, infrastructure, etc., are still a state matter.

The role of the state in this particular area in Ukraine NOW was described by the leader of the Political Council of the Opposition Platform - For Life, Viktor Medvedchuk, who, summing up the results of 29 years of Ukraine's independence, noted that the country was now in a state of de-intellectualization, amid an ongoing brain drain on the one hand, and “a stupid and flawed education system, zero support for science (instead of 1.7 percent of GDP, as provided for by law, a meager 0.26 percent or less is allocated to scientific research), and the elimination of the system of trade schools," on the other. [ii]

Meanwhile, such state-owned economic giants as Naftogaz Ukrainy and Ukrainian Railways serve as a source of enrichment for a chosen few to an extent that they now have serious problems maintaining even their own infrastructure. To make a long story short, state-owned companies are unable to bear the social and infrastructural burden, since their real burden is corruption.

In his appeal to a foreign audience, Zelensky seeks to present a country that is trying to prove its geopolitical identity, while in reality, his foreign and domestic policy, just like that of his predecessors, is that of an underdog.

The Ukrainian authorities continue to listen to and bend under pressure from nationalists, the anti-Russian establishment and foreign curators.

On August 27, the nationalists provided fresh evidence of this: on the Kiev-Kharkov highway, armed members of the nationalist organizations "National Corps" and "Azov" attacked a bus with 22 representatives of the Opposition Platform - For Life party on board, stopping the bus and pelting it with automatic gunfire. Two people were wounded and remain in serious condition. This criminal act is the result of impunity enjoyed by the ultranationalists, who act with the direct patronage and connivance of the authorities, including President Zelensky, who declares his support for their cause. [iii]

This tragic event clearly demonstrates just how out of sync present-day Ukrainian reality is with the bright future of Ukraine NOW. Suffice it to recall how former US Vice President Joe Biden arranged for the sacking of Ukraine’s Prosecutor General Viktor Shokin. In short, hurry, "the largest country in Europe" has already become a "real breakthrough"…

Just like any other Ukrainian citizen, Zelensky has every right to dream, no doubt about that. However, he is not just a citizen, he is President. Therefore, what he is doing to make this dream come true is of paramount importance for his country. But dreaming is easier, of course...

The views of the author are his own and may not necessarily reflect the position of the editorial Board.