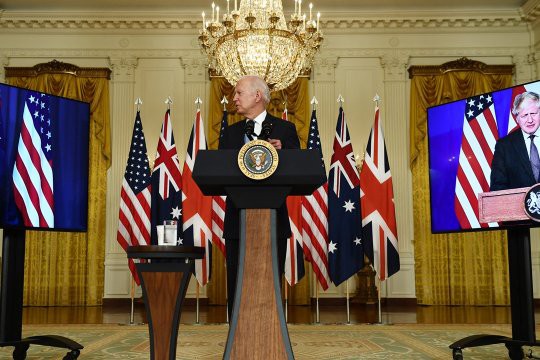 The current efforts by the United States, Australia and Britain to establish  AUKUS partnership were on the agenda of the talks between Russian Deputy Foreign Minister Sergei Ryabkov and US Under Secretary of State for Political Affairs Victoria Nuland[1], which took place in Moscow on October 12. A statement relative to this issue was made by Russian Foreign Ministry Sergey Lavrov as he addressed the 29th Assembly of the Council for Foreign and Defense Policy on October 2: «One of the most popular trends of today is the so-called Indo-Pacific strategies, which were devised by the United States, materialized in  QUAD (USA, Japan, India, Australia), and just recently spilled into the creation of AUKUS. All this adds to the blurring of universal formats in Asia and the Pacific, which used to enjoy the patronage of ASEAN, and were all ASEAN-centered»[2]. Earlier, on September 25, speaking at the UN General Assembly, Lavrov said that «pushing for «an order based on the rules», instead of unconditional compliance with international law, is fraught with a dangerous return to the bloc policy, creation of division lines between a group of western countries and the rest of the world»[3].

The challenges posed by the AUKUS pact for South East Asian countries go farther than reducing the efficiency of ASEAN-focused dialogue platforms, such as the East Asian summit.  The risks may also affect consensus within the Association itself, whose members are supposed to work out a common stance on the “semi-alliance” of Washington, Canberra and London. On the other hand, ASEAN’s abstention  from elaborating a clear position on the issue will do no good either.

Malaysia’s Defense Minister Hishammuddin Hussein, addressing national parliament on October 12, called for working out a common stance at ASEAN’s forthcoming summit on October 26-28. Indonesia, traditionally acting as an informal “moderator” of ASEAN agenda, and Malaysia proper, have already presented a negative assessment of the new partnership, which could lead to a new arms race and erosion of nuclear non-proliferation, and which could provoke other actors concerned into taking more radical measures. Philippines can be described as an overt supporter of the pact, while other ASEAN members have yet to clarify their positions. ASEAN is mostly cautious about the issue in question, particularly in view of Australia’s participation in the new alliance.

Australia’s decision to cooperate in the  development of its own nuclear submarine fleet with non-nuclear weapons as partnership within AUKUS runs counter to Canberra’s image as a staunch supporter of all kinds of nuclear non-proliferation initiatives and moves against the spread of other types of weapons of mass destruction which has been in place since the early 1970s and which was always welcomed by ASEAN. Australia is a member of one of six agreements on nuclear-free zones (The Treaty of Rarotonga of 1985). While the ambivalence of Australia’s foreign policy stems from its hope of American nuclear umbrella, it is clear that in the case of Canberra, American nuclear guarantees look more blurred than for Tokyo. We are not talking about Australia’s nuclear choice, all issues related to “non-peaceful atom” is a sensitive issue for South East Asian countries, and not only for them. For the first time, a “loophole” in the Nuclear Non-Proliferation Treaty has been made use of, enabling non-nuclear countries to develop nuclear submarines. Also far from encouraging are plans by Australian Prime Minister Scott Morrison to purchase Tomahawk cruise missiles from the USA[4].

Until recently, ASEAN countries considered Australia and New Zealand the friendliest and spiritually closest segment of the Anglo-Saxon world. Now that the submarine deal is in place, Canberra and Wellington might face differences. In addition, ASEAN now knows the true value of assurances by Quad members that they are interested in maintaining the ASEAN – centered architecture in Indo-Pacific Region.

Incidentally, in the days of Shinzo Abe’s second Cabinet, Australia intended to purchase submarines for the Royal Navy from Japan. The Soryu-class submarines (Mitsubishi-Kawasaki consortium) are considered equivalent to nuclear ones in their characteristics and are viewed as the most advanced of non-nuclear submarines.  The deal fell through under pressure from the Australian defense industry, which insisted on producing the submarines locally and, as some “evil elements” say, under pressure from Beijing, which enjoyed good positions in Australian business community. In the course of an open tender, the Australians opted for a French project. Tokyo was outraged, and now Paris too “went overboard”. However, it's highly unlikely that Australians will say ‘no’ to Americans as well, after change of government, there can be “no kidding” with “Uncle Sam”.

As said before, statements in approval of the pact came from Manila. Philippine Foreign Minister Teodoro Locsin said on September 19 that broadening capabilities of a nearby ally towards projecting their might will contribute to the restoration and maintenance of balance, rather than destabilization. In  the opinion of the minister, the expansion of Australia's capabilities will make a tangible contribution to the military potential of the United States, Australia’s ally[5].

As for the other two countries that were among the founders of the Association (Singapore and Thailand), they have not expressed their point of view yet. On September 16 Singaporean Prime Minister Lee Hsien Loong had a telephone conversation with his Australian counterpart, in the course of which the two sides discussed anti-Covid measures and the new pact. Lee Hsien Loong expressed hope that AUKUS would make a tangible contribution to regional peace and stability and would make a good addition to regional architecture[6].

For Thailand, AUKUS is a more sensitive issue. At present, Thai Royal Navy has no submarines, however, in 2017 they reached agreement on the purchase of a diesel submarine from China, while two more deals are in limbo for lack of funding[7].

Vietnam, a key regional player, has abstained from formulating a clear position on AUKUS. Though, it has to be pointed out that Hanoi’s military ties with Canberra, Washington, New Delhi have expanded dramatically in recent years. But Vietnam is against using the term “strategic partnership” relative to its relations with the USA[8]. Ties between Vietnam’s and Japan’s defense sectors have been developing and the two sides have reached an agreement on military and technological cooperation[9].

What presents a special interest is the reaction to AUKUS from Cambodia, which is strongly dependent on economic assistance from China. The Australian government has offered to conduct “explanatory work”.

On October 8 Australia’s Foreign Minister Marise Payne called his Cambodian counterpart Prak Sokhon to discuss the prospects for AUKUS, and according to Phnom Penh  media, the two parties sounded optimistic. Prak Sokhon are quoted as saying that Cambodia, which sustained so much suffering and destruction, wants the region to remain peaceful, stable and prosperous, and hopes that AUKUS will not fuel unhealthy competition or further escalation of tension [10]. This is a diplomatic wish, no more. But the question – what was AUCUS created for? – suggests the logical answer that it was created to “enforce order based on the rules”. Whose rules?  - no guessing needed.